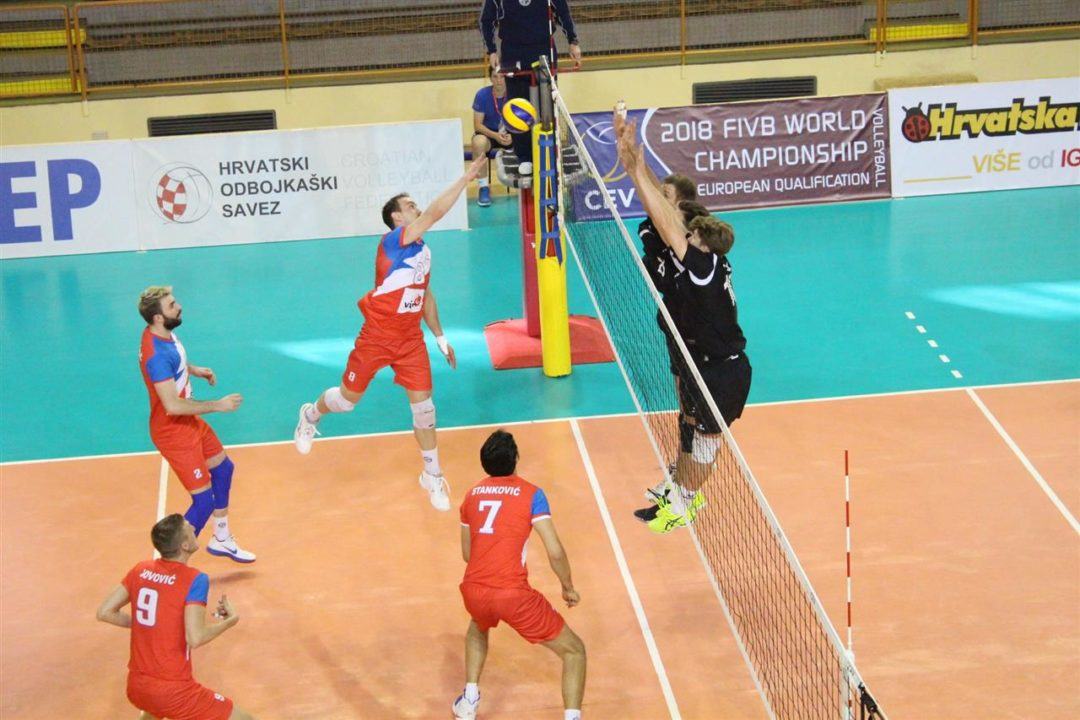 It took four sets, but the 22nd ranked Danish team defeated Scandinavian neighbor Norway in Pool E action. Norway, which was playing without injured libero Oystein Bergum, remained close in the back and forth battle, but could not pull off the upset, falling 25-23, 18-25, 25-16, 25-23.

“Matches with Norway are always special because we are neighboring nations and we play against them with a special charge,” Denmark’s Peter Trolle Bonnesen said. “These are important qualifications, and today’s match is a good comeback for us after yesterday’s loss in the match against Serbia.”

Denmark held off a late Norwegian charge in Set 1, winning 25-23 after Norway had narrowed the gap to two at 23-21. Norway came through with a 25-18 win in Set 2 to even the match. Nine Norwegian errors and four blocks aided Denmark in a nearly start to finish Set 3 win. Norway led for much of the fourth set, boasting leads at 16-13 and even 21-20, before being edged out in the end. Denmark posted 16 kills in the final set.

“We played well, but in some moments we lacked quality and consistency, especially when it comes to our side-out where we lost quite a few points,” Norway’s Rune Fasteland said. “The new libero played well but without the guy who got injured yesterday, we are not quite the same team.”

Bonneson racked up 22 points in the win, including 19 kills and two blocks. Rasmus Breuining Nielsen (14) and Philip Metin Ozari (11)  followed. Ozari served up three of the team’s seven aces.

The Serbs led Sets 1 and 3 from start to finish, but the Swiss challenged, taking an 8-6 lead in Set 2. Serbia turned things around by the second timeout, going up 16-14 and never looking back.

Eleven blocks and seven aces led the Serbian charge, which was supported by a 65 percent team hitting efficiency.

“Yesterday we were not that good, especially from a psychological point of view,” Serbian captain Dragan Stankovic said. “Today we played with an opponent who had two wins, so as many as we had, and we knew that we had to take this match very seriously, which is what we eventually did. There are two more matches from which we expect further victories to secure our participation in the World Championship.”

“It was a strange feeling to play against Serbia, since my parents are from Belgrade,” Switzerland’s Jovan Djokić said. “As a child I always wanted to play for Serbia. I do not think any team from this group can compete with them or challenge them. There are two games still remaining for us and I think we can win them. Our goal is to progress to the third round of qualifications.”

After cruising through Set 1, Belarus watched its early Set 2 lead evaporate into a 21-17 Croatian advantage and eventually a 36-34 win. Croatia managed seven blocks and had helped from 11 miscues in the victory. Another easy Belarussian win in Set 3 did not deter Croatia from taking an 8-7 lead in Set 4, but again the Croatians could not hold on, falling 25-22 and dropping the match.

“Today our service and defense worked well,” Belarus captain Siarhei Busel said. “However, we made too many unforced mistakes in the second set. Our block was not so good, but when we managed to stop Ivan Raič, we got control over the match.”

Artur Udrys (22) and Pavel Kuklinski (20) guided the scoring for Belarus, including 20 and 18 kills respectively. Aleh Khmialeuski (16) and Busel (10) aided in the victory.

“We tried our best but it did not work,” Raic said. “Due to commitments we all had towards our respective clubs, we started our preparations for this tournament very late. We are a young team and we are playing for the first time with this roster. We need time and I believe that we will achieve some good results in future.”
Pool E in CRO (Through 5/26/17)