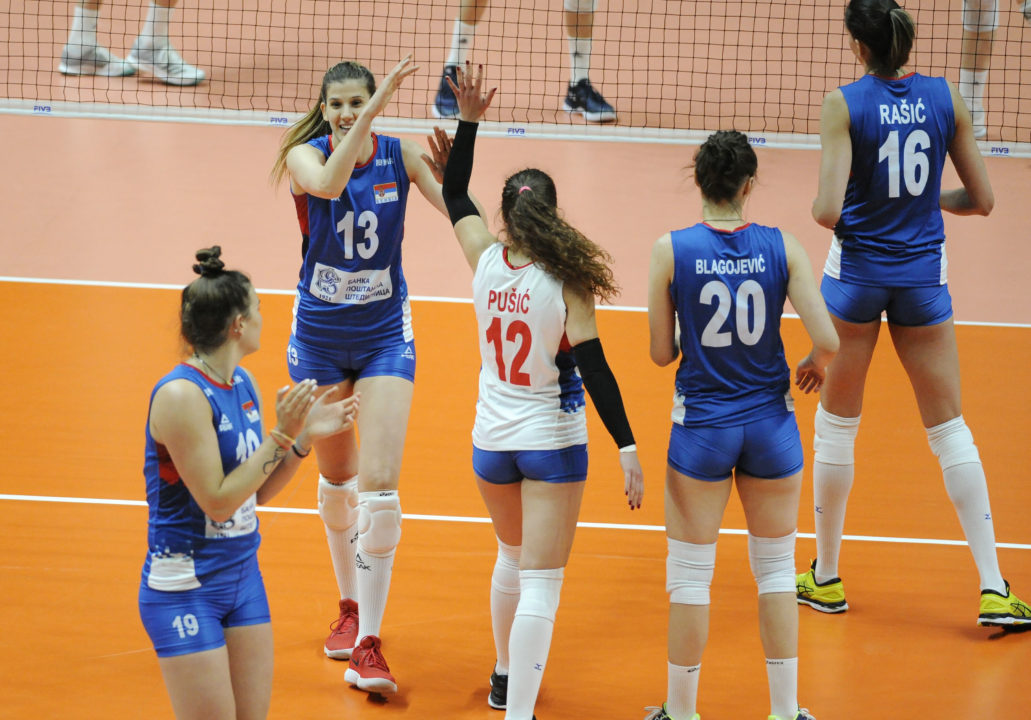 Any questions on Serbia's ability to solidify its spot in the VNL Final Six were put to rest on Tuesday as the team, despite what many thought was a depleted roster, knocked off No. 2 United States in four sets to punch its ticket to China.  Current Photo via FIVB

Any questions on Serbia’s ability to solidify its spot in the VNL Final Six were put to rest on Tuesday as the team, despite what many thought was a depleted roster, knocked off No. 2 United States in four sets to punch its ticket to China.

“We did a great job,” opposite Ana Bjelica said. “ We came here with young players but we showed we can beat anyone.”

The Serbians boasted a pair of 20 point scorers in Bojana Milenkovic (23) and Ana Bjelica (20), while Jelena Blagojevic tacked on 15 points. Bjelica notched a team-high 20 kills, while Milenkovic accounted for 17 putaways and a team-best six blocks. Blagojevic turned in 14 kills and an ace. Milena Rasic added in nine points on seven putdowns and two blocks. Bojana Zivkovic served up a team-best two aces amongst four points.

Michelle Bartsch-Hackley starred for Team USA with a match-high 26 points, including a match-leading 22 kills, three blocks and an ace. Foluke Akinradewo added 11 points on seven kills and four blocks, while Annie Drews chipped in 10 points, all on kills. Kim Hill contributed nine points on eight kills and an ace, while Rachael Adams put up a team-leading six blocks as part of her eight-point tally. The team used just two substitutes in the match, Kelly Murphy and Micha Hancock, in limited action.

The teams played to a 19-all tie in Set 1. Carli Lloyd put up a block to make it 23-22 USA. The teams traded points over the next several serves, until a serve into the net clinched the Serbian win at 30-28.

The teams once again found themselves in a 19-19 knot-up in Set 2, but this time it was the Americans who had the upper hand down the stretch. An Adams blocks gave the USA the edge en route to the 25-23 win.

Milenkovic and Bjelica carried the load for the Serbians as they cruised to 25-20 and 25-18 victories to seal the upset.

With the win, Serbia secured its spot in the VNL Final Six at 10-3 with 31 points, out of reach of sixth place Italy. The Americans were the first team through to the Final Six, earning their spot last week and still standing atop the rankings in first at 11-2 with 34 points despite the loss.

Brazil also is through to the Final Six after Day 13. Two more spots are still available as host China will round out the field.