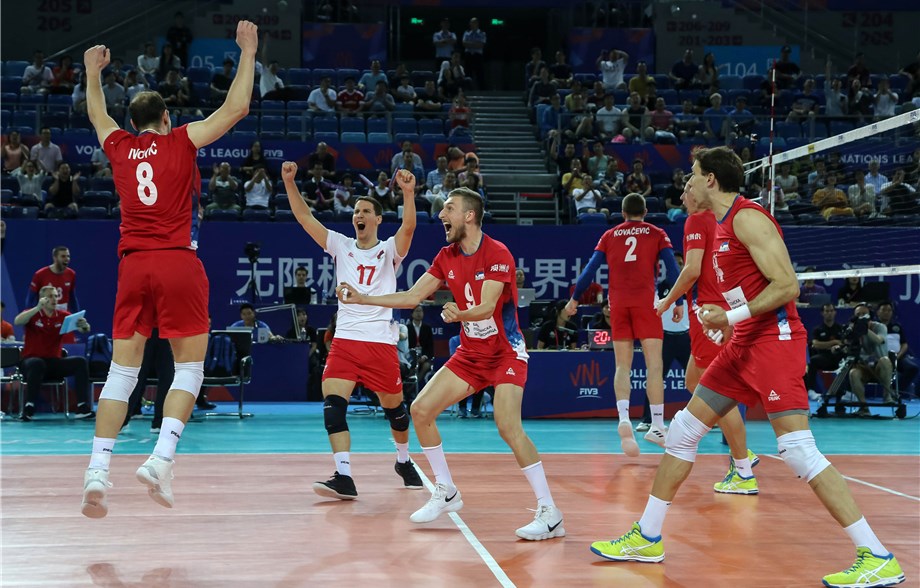 Serbia put up 10 blocks and had help from four double-digit scoring efforts in a four-set win over Japan to secure its spot in the VNL Final Six. Stephen Maar was back on his game for Canada with 16 points to lift his team to a sweep of China.  Current Photo via FIVB

Serbia put up 10 blocks and had help from four double-digit scoring efforts in a four-set win over Japan to secure its spot in the VNL Final Six.

Srecko Lisinac (17), Marko Ivovic (15), Aleksandar Atanasijevic (14) and Uros Kovacevic (11) led the way while Drazen Luburic and Marko Podrascanin chipped in nine points apiece in the Serbian win. Lisinac did a little bit of everything to lift his side, posting nine kills, five blocks and three aces. Ivovic paced the offense with 14 kills, while Atanasijevic, Kovacevic and Luburic followed with 13, 10 and nine putaways respectively. Podrascanin put up a team-best three blocks to go with six kills, while playing the final three stanzas. Luburic started the first two sets before exiting, while Atanasijevic and Kovacevic started just the final two stanzas.

Serbia jumped out to an 8-1 lead in Set 1 behind stout blocking from Lisinac and Nikola Mijailovic. Japan chipped away with help from Yanagida’s offensive prowess and Fukuzawa’s blocking, eventually tying it up at 22. Japan thwarted two Serbian set-point tries, before completing the comeback at 28-26.

Kovacevic came in midway through Set 2 and helped dig Serbia out of a hole caused by errors. The teams traded points down the stretch and neither could close the door, leading to the final 35-33 score. Japan missed out on five set-point tries and Serbia missed several attempts as well. Eventually, an Atanasijevic kill gave the Serbians the set on their seventh try.

Serbia boasted a 20-17 lead in Set 3 as Atanasijevic starred offensively en route to a 25-21 victory.

The Serbians closed out the set with a 25-18, clinched by a Ivovic termination.

Stephen Maar was back on his game for Canada with 16 points to lift his team to a sweep of China.

Maar downed a match-high 15 kills and added a block, while Arthur Szwarc tacked on 11 points on seven kills and a team-best four blocks. Bradley Gunter added six kills and two of the team’s four aces. Graham Vigrass and Gavin Schmitt had the night off.

Chuan Jiang turned in 12 points, all on kills, to lead the Chinese effort. Libin Liu and Shuhan Rao followed with nine points apiece. Liu downed eight kills and served up an ace, while Rao added seven putaways and a team-best two blocks.

China led 8-5 in Set 1, but the errors piled up and Szwarc heated up for Canada. It was a two-point game late, but Maar came through in the end to help the Canadians seal the 25-21 win.

Maar took control early in Set 2, but China rallied behind Liu’s serving to pull the home team ahead 18-17. Errors popped up late and had Canada on top 24-21 before a Marr putaway gave the team the 25-23 victory.

Canada jumped ahead 5-0 in Set 3 and errors again thwarted the Chinese efforts for a comeback in a 25-22 loss to wrap up the night. Nicholas Hoag capped the victory for the Canadians to move the team to 7-7 in VNL play.