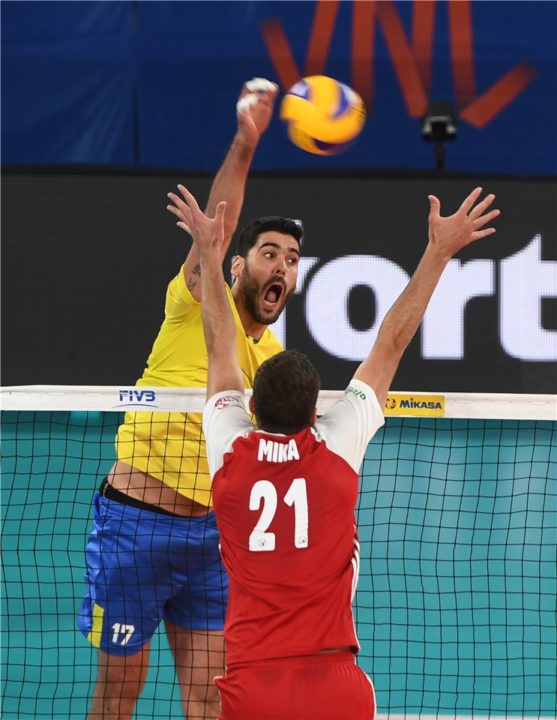 Five of the six Argentine starters scored in double digits as the team garnered its third win of VNL play against home-standing Australia. Brazil secure its spot in the VNL Final Six with a four-set win over fellow contender Poland with help from a 19-kill effort by Evandro Guerra. Current Photo via FIVB

Five of the six Argentine starters scored in double digits as the team garnered its third win of VNL play against home-standing Australia.

Jordan Richards (15), Nehemiah Mote (14) and Max Staples (11) led a group of five Aussie players with eight of more points. Richards scored all 15 of his points on kills, while Mote added 11 kills and a team-best three blocks. Staples tacked on 10 kills, followed by Thomas Hodges‘ seven and five each by Beau Graham and Paul Carroll. Graham also managed three blocks. Hodges only started the last two sets, while Carroll played just the first two.

Argentina blazed through the first two sets, with help from some serving woes by the Aussies.

The home team gave the crowd something to cheer about, however, stealing away Set 3 25-20. A kill by Staples that landed on the line sealed the victory and was confirmed after video review.

Australia carried the momentum into Set 4, leading for the majority of the stanza, but Argentina capped the match with a pair of blocks at 25-21.

Back on track in Australia, Brazil registered its second win in as many days to secure its spot in the VNL Final Six with a four-set win over fellow contender Poland.

Maciej Muzaj led a balanced offensive effort for Poland with 18 points (15 kills, 3 blocks). Aleksander Sliwka came in as a substitute in Set 2 and piled up 12 points from there (11 kills, 1 block). Mateusz Mika added nine kills and the team’s lone ace, while Artur Szalpuk chimed in with six kills and three blocks in just over two sets of play. Bartosz Kwolek and Bartosz Bednorz did not play in the match.

Neither team was willing to give any space in the match. Brazil squeaked through for the 25-22 win in Set 1 on a Carbonera putaway, while Guerra captured the final point of a 25-23 Set 2 victory.

Poland was not content to let the Brazilians walk away with a clean sweep and battled back to grab a 25-23 win in Set 3 with help from a stout block.

In the end, Guerra capped the match with his 19th kill to earn the Brazilians a trip to Lille, France in a few weeks for the finals. Poland is still very much in the thick of the race for the last spot in the Final Six and would clinch it with an Italian loss on Saturday or a win of their own on Sunday against Australia.