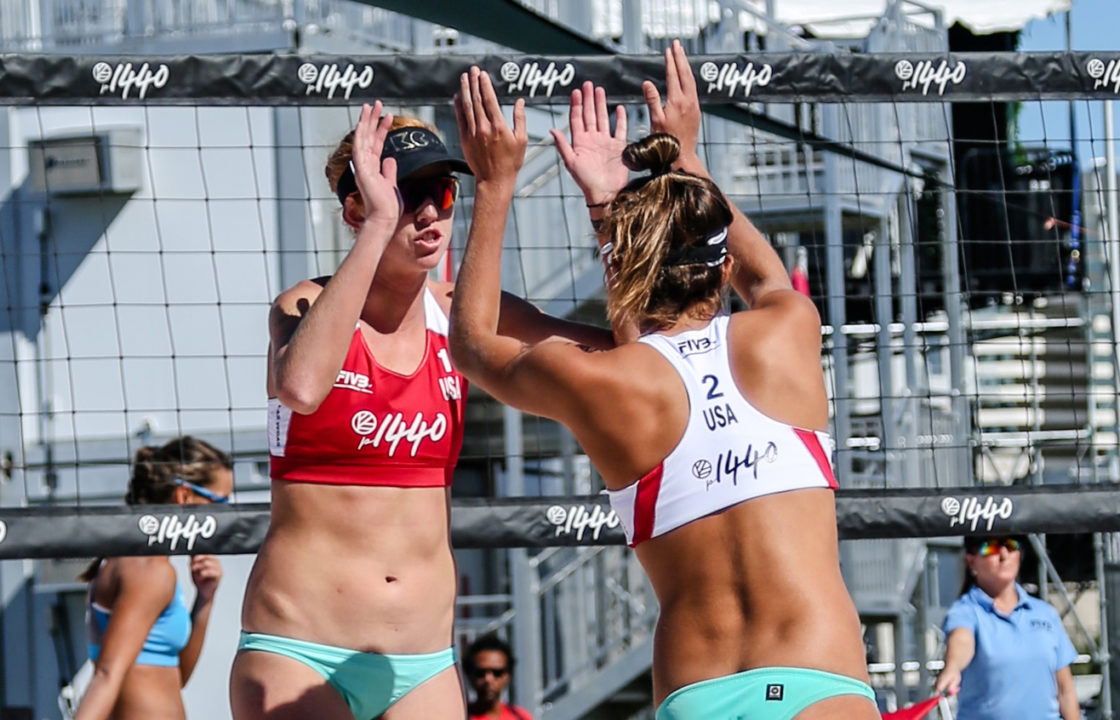 Four American men's pairs and three United States women's duos were among those the eight teams per gender that moved through qualifying into the p1440/FIVB Las Vegas Four Star on Wednesday.  Current Photo via FIVB

After a country quota match for the Brazilian women on Monday, qualifying action began in earnest on Wednesday with a round of women’s play and two round of men’s qualifying at the Las Vegas Open co-sponsored by p1440 and the FIVB.

In the end, eight men’s teams and eight women’s teams battled their way to the 32-team main draw, which is set to begin on Thursday with pool play.

Four American men’s pairs and three United States women’s duos were among those that moved on.

Five American duos played in the second round, with Miles Evans/Bill Kolinske knocking out countrymen Avery Drost/Eric Zaun in tiebreak (18-21, 21-19, 16-14).

The Round 2 winners, which earned a spot in the main draw were:

“We were behind in the second set and just thought we had nothing to lose and that we needed to keep pushing,” Ulveseth said. “It was a little windy too and we had to adjust to it. We had a long trip from China and we’re happy that we managed to qualify.”

The seven other teams moving on the main draw are:

Ana Patricia/Rebecca are fresh off a runnerup finish at the Yangzhou Four Star on Sunday and a gold medal at the Qinzhou Three Star two weeks ago.

“We arrived from China on Monday and we are still dealing with the time-difference and the sand, which is a little bit different than the one we played at in China,” Rebecca said. “It wasn’t our best game but we were very focused and aware that we are still adapting to the tournament, so it was a good start.”

Sponcil/Claes also finished on the podium in Qinzhou, picking up the bronze.