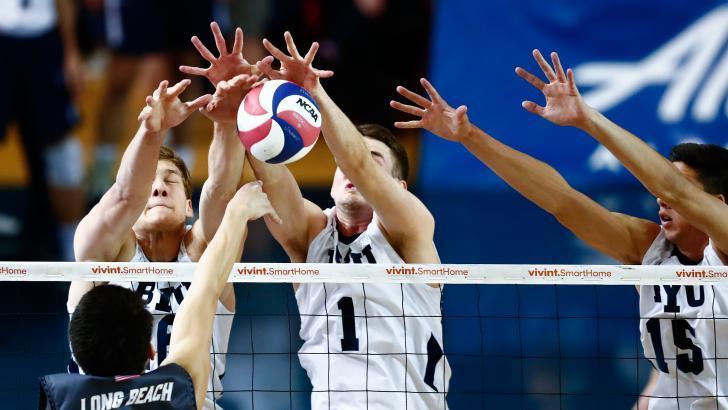 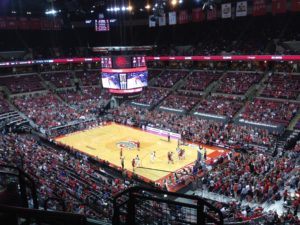 Ohio State sweeps Hawaii to advance to national championship, sets up rematch of 2016 championship with BYU 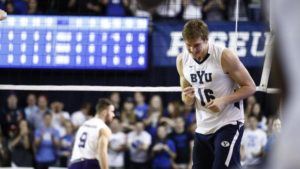 The NCAA Men’s Volleyball Championship continues at 6 p.m. ET Thursday when No. 2 seed Long Beach State (27-3) faces No. 3 seed BYU (25-4). A match between No. 1 seeded Ohio State and No. 4 seeded Hawaii will follow. Both of Thursday’s winners will move on to the NCAA title match, which will be played on Saturday. Here’s a look at the championship court.

aA pair of familiar foes will face off in the first semifinal as Long Beach State and BYU from the Mountain Pacific Sports Federation will vie for a spot in Saturday’s final.  The two teams shared the regular season title. For its part, Long Beach State won the MPSF regular season and tournament titles, downing Hawai’i in the championship match. BYU (24-4) was the No. 2 seed in the Mountain Pacific Sports Federation Tournament before falling to No. 3 seed Hawaii in the semifinals

National Player of the Year T.J. De Falco leads the Long Beach State side with 3.99 kills per set, while hitting at a .394 clip and adding 30 aces, 1.73 digs and 0.72 blocks per set. De Falco also has made good on 98 percent of his team-best 548 serve reception attempts. Sophomore opposite Kyle Ensing, a second team All-American, follows with 3.35 kills per set, while hitting .333 and chipping in 0.83 blocks per set and 26 aces. At the net, senior middle Amir Lugo-Rodriguez, a first team All-American, puts up national-best 1.30 blocks per set.

BYU leads the all-time series with Long Beach state 33-26, including a series split in Provo in 2017. BYU won the first match in five sets, while the 49ers won via sweep the second match. The last time the teams met in the NCAA Tournament was in 2016 with BYU winning in the NCAA semifinals.

Both teams faced off against their fellow MPSF teams. Outside of the conference, both teams face McKendree. Long Beach State won via sweep, while BYU won twice via sweep.

The winners of both Thursday matches will meet on Saturday in the NCAA Championship match live on ESPNU.

Hawai’i is led by sophomore opposite Stijn van Tilburg, who ranks third nationally with an average of 4.26 kills per set, while hitting at a .380 clip. Senior outside Kupono Fey (2.78) and freshman opposite Rado Parapunov (2.27) follow. At the net, redshirt freshman middle Patrick Gasman and senior middle Hendrik Mol lead the way with 1.11 and 1.08 blocks per set respectively. Mol also has served up a t team-best 26 aces. Van Tilburg and setter Jennings Franciskovic were named as first team All-Americans, while libero Larry Tuileta was a second team honoree and Mol garnered honorable mention acclaim.

First team All-American outside hitter Nicolas Szerszen leads the nation with 0.63 aces per set, while also ranking among the national top 10 in points per set (4.54, 9th) and hitting percentage (9th, .385), and ranking 11th in kills per set (3.70). Senior opposite Miles Johnson, a first team All-America selection, is tops among the Buckeyes offensively, downing 3.88 kills per set, while hitting at a .338 clip and serving up 49 aces. At the net, redshirt sophomore middle Blake Leeson leads the way with 1.00 stuffs per set.

Hawai’i leads the all-time series with Ohio State 5-1, however this is the first ever postseason meeting.

Hawai’i and Ohio State played six commons opponents in 2017. Both faced Ball State, USC, Stanford, Grand Canyon, Lindenwood and UCLA. Both were victorious against Ball State, with the Buckeyes winning via sweep (2/2) and the Rainbow Warriors winning in four (1/7). Hawai’i swept a pair of regular season matches with USC, while Ohio State won 3-1 on Jan. 6. Both teams topped Stanford twice via sweep. Against GCU, UH won twice via sweep in January, while OSU won 3-1 and 3-2 in late February. Versus Lindenwood, Hawai’i took a sweep, while OSU won in four sets. The Rainbow Warriors topped UCLA twice in four sets in April, while Ohio State managed a four-set win over the Bruins back in January.

The winners of both Thursday matches will meet on Saturday in the NCAA Championship match live on ESPNU.