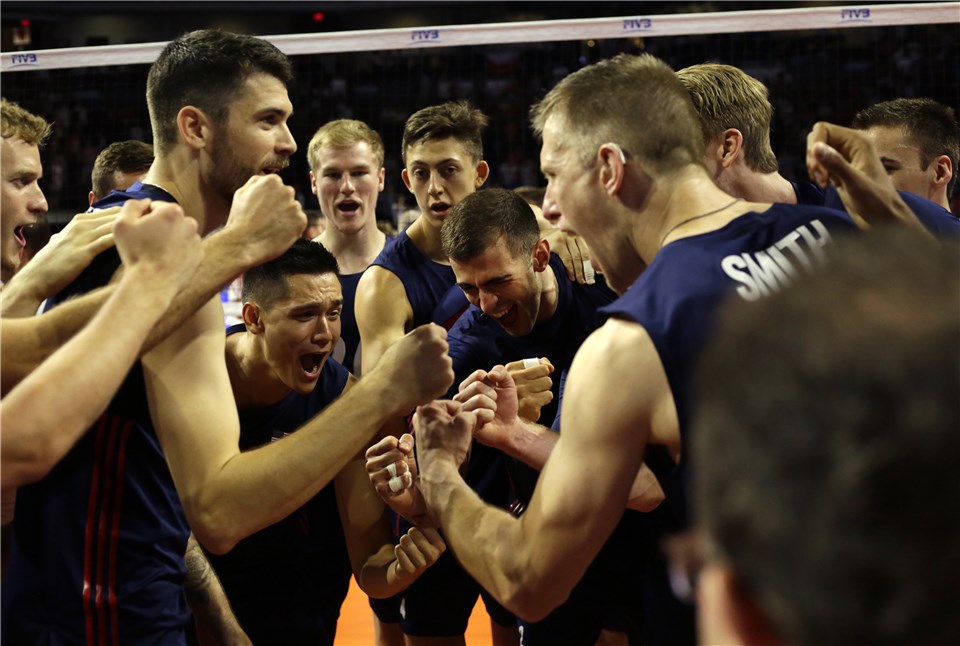 The United States left little question which was the better team in a home sweep of Poland on Saturday, climbing into second place in the VNL standings with the win.  Current Photo via FIVB

The United States left little question which was the better team in a home sweep of Poland on Saturday, climbing into second place in the VNL standings with the win.

“We had a lot of great contributions , different guys stepped up and that makes it difficult for the opposition,” USA captain David Smith said. “We have rotated well.

“It was a great atmosphere. It was loud and we are so appreciative.”

The Americans bested Poland in kills (45-31) and aces (8-1). The Poles did have help from 21 Team USA errors, but committed 17 of their own in the match as well. Both teams put up five blocks.

With Ben Patch and most recently Thomas Jaeschke out with injuries, TJ DeFalco stepped into the starting lineup alongside several Olympians and played valiantly.

Aaron Russell and Matt Anderson led the way for the second night in a row with 14 and 12 points respectively. Russell downed 11 kills and served up a team-best three aces, while Anderson added 10 putaways, a block and an ace. The team used only its six starters with each managing five or more points. Max Holt (11), DeFalco (9), Micah Christenson (7) and David Smith (5) rounded out the group, each posting at least four putaways. Holt put up a team-best two blocks, while Christenson added two aces.

Bartosz Bednorz was the lone Polish player to reach double digits, managing 10 points on eight kills and a team-high two blocks. Maciej Muzaj chipped in eight points, all on kills, while Bartlomiej Lemanski followed with six points on three kills, two blocks and the team’s lone ace. Artur Szalpuk was limited to three points, while starting just the final set. Jakub Kochanowski had the night off, while Bartosz Kwolek came in to serve once.

Jaeschke provided a key block to make it 20-18 in Set 1 and give the USA a little cushion in an otherwise close set. Holt and Christenson served up aces down the stretch of the 25-20 win.

Christenson and Holt countered Poland at every turn in Set 2 and Russell sewed up the 25-19 win to put the Americans on the hill for their fourth-straight VNL victory.

In Set 3, the United States cruised to another 25-19 victory, capped by Russell’s third ace of the night.