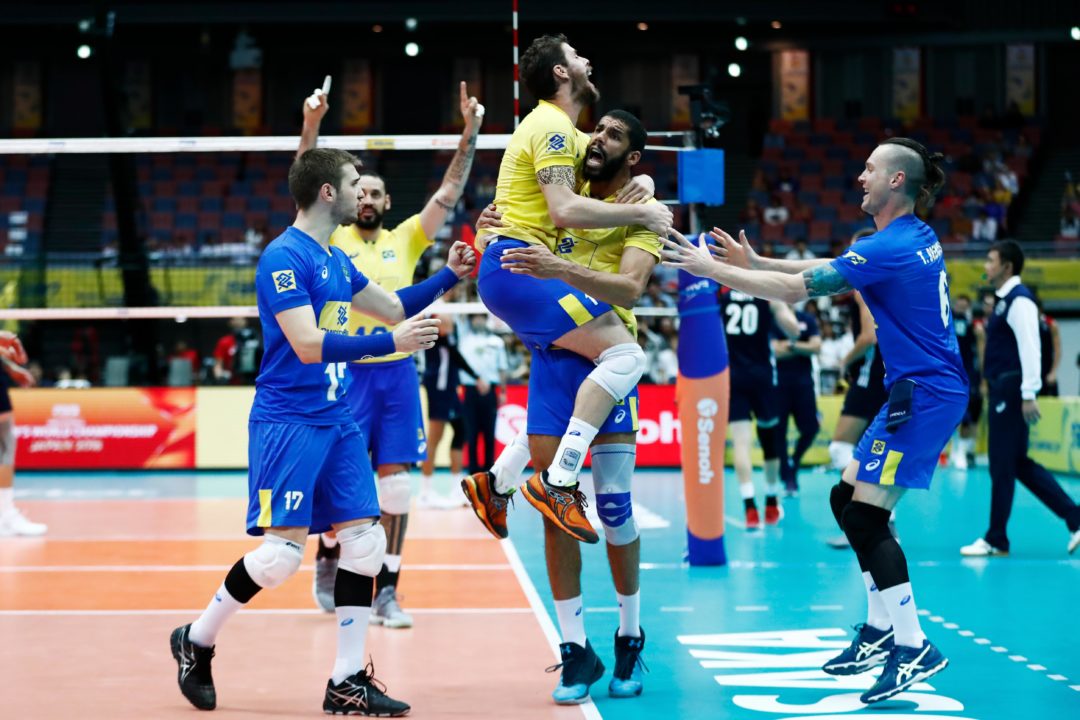 Now, only a miraculous combination of results can prevent Brazil's title with still one match to go Stock Photo via FIVB

AN INSTANT CLASSIC! Team USA’s encounter was nothing like the one sided USAV Cup. Instead, fans were treated to a five set war in Osaka. Wallace Souza had a team-high 22 points in Brazil’s 3-2 (28-26, 15-25, 25-20, 22-25, 15-13) win over USA in the FIVB Volleyball Men’s World Grand Champions Cup at the Osaka Municipal Central Gymnasium on Saturday Wallace showed some clutch skills at crucial moments of the game. In all, he had 19 kills and three blocks. Mauricio Borges, Ricardo Lucarelli and Lucas Saatkamp helped Wallace out with 18, 16 and 12 points, respectively. USA’s Matthew Anderson topped all scorers with 27 points. Full stats here and here.

USA and Brazil ran different attack strategies. USA’s set plays were directed to Anderson, while Brazil’s offence involved more players. Brazil succeeded with the strategy and closed the first set with a two-point margin, but USA responded with a set victory as Anderson continued to convert on his attempts. The next two sets resulted to split victories that led to the match decider, where Brazil prevailed with a 15-13 score.

This win all but gives Brazil the title, as they will play Japan in their next game, a sure win. The Italians are the only ones with a real chance of threatening them, but they would need to win its games against France and The USA 3-0 and still hope for Brazil to lose at least a set against the Japanese team – an unlikely feat, since Japan has only won one set in the tournament se far.

This post will be updated as the matches in Osaka come to an end.