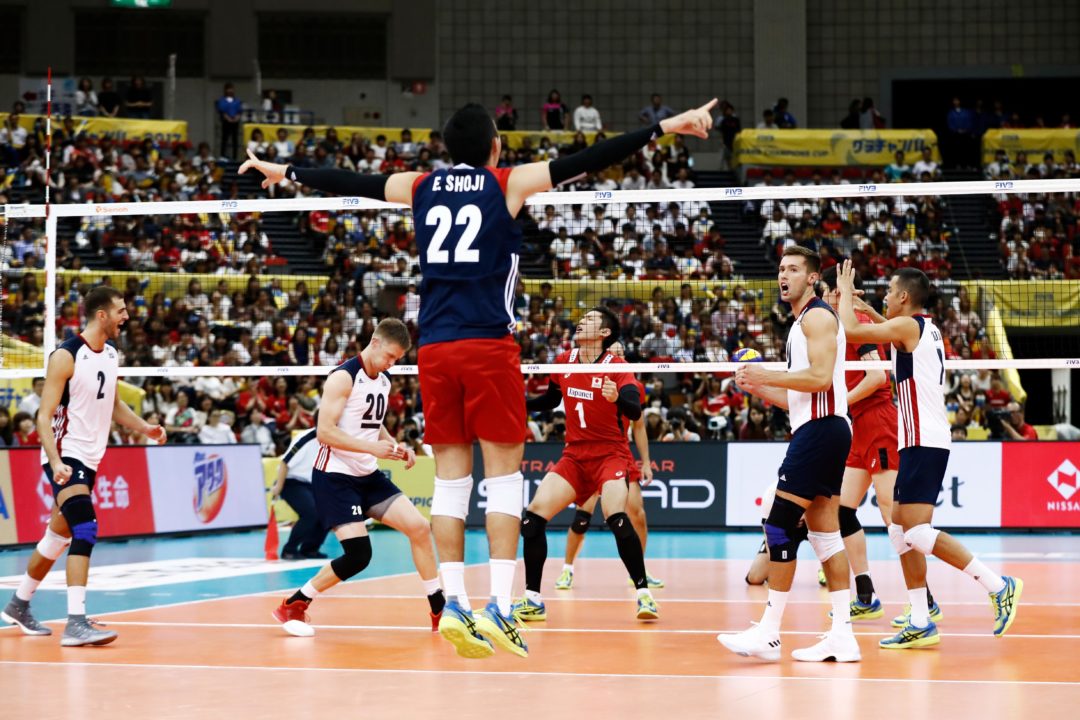 The game is a must-win for Team USA's title hopes. Meanwhile, Brazil will battle leaders Iran, while Italy and Japan close out the day in Osaka. Stock Photo via FIVB

The FIVB Volleyball Men’s World Grand Champions Cup is ready to be resumed after a rest day. The action now changes from Nagoya to Osaka for the final three days of competition. Iran leads all teams as the only unbeaten squad, followed closely by Brazil and USA. Below, you’ll find FIVB previews for each game.

Both France and USA have a 1-1 record after two competition days. The game in Osaka will be their first encounter in the history of the Grand Champions Cup. Recently, France rebounded from a straight-set loss to Brazil on Tuesday by defeating hosts Japan in straight sets on Wednesday. Meanwhile, USA started their 2017 Grand Champions Cup with a straight-set victory over Japan on Tuesday, before dropping a five-setter against Iran on Wednesday.

These nations clashed twice in the 2017 World League, with France winning both fixtures. USA’s last competitive win over France came at the Rio 2016 Olympic Games, when they recorded a 3-1 preliminary round victory.

USA coach John Speraw: In this tournament, we were enjoying ourselves until about 17-13 in yesterday’s game (against Iran). We played perfect volleyball in the first two sets and things were going great in the third set. Then things didn’t go great any more. It was a tough experience and we have to learn as much as we can and see if we can get back to playing perfectly against France tomorrow.

France coach Laurent Tillie: We have three matches left against three teams with three different styles of play – America, Italy and Iran – so we have the possibility of three more successes. But also, we can learn from all these teams. We have to come up with countermeasures against them so we can make a good performance. So far, we’ve had some ups and downs; we haven’t been very stable in our play, so that’s something we want to bring to our games. But we’ll be playing the Olympic No. 2 and No. 3 teams and another strong team in Iran. It’s an honour to play such teams.

Iran remais the only unbeaten team in the tournament, after its come from behind 3-2 victory over Team USA. To stay that way, the Asian team will face a tough challenge as they meet Brazil. In these nations’ most recent competitive meeting, Brazil beat Iran 3-1 at the 2017 World League. Iran’s last victory over Brazil at the world level came at the 2014 World League, when they recorded a 3-1 pool stage win.

Brazil is the defending champion and winner of four of the previous six instalments of the Grand Champions Cup, accumulating a 28-4 all time record during that span, having never lost more than one match in this tournament in a single year. Meanwhile, Iran has now won each of their last four matches at the Grand Champions Cup, after winning only two of their first eight in the competition.

Brazil coach Renan Dal Zotto: In this tournament so far, the technical level has been very high. There have been some excellent matches and the tournament has been superbly organised. If we look at the table, we all have three matches left and it’s pretty tight. Almost all the teams have a chance to win the title. There will be some high-level matches to come but we are aiming to play our best and finish as high as possible. We have three matches to play, against Iran, USA and Japan, all very tough teams with high technical levels and quality. We want to give it our best and get a good result, especially in tomorrow’s game against Iran who have been playing well so far. Our setter Bruno has had treatment on his right shoulder. We don’t want to take risks with him. If Bruno feels OK, we will play him, but we still have Rafael who has a lot of experience and is a player I trust.

Iran coach Igor Kolakovic: I think we made two big surprises for Iran volleyball in the games we played and I’d like to make more surprises. But it’s going to be difficult in the next three games, first against the Olympic champions Brazil, then the home team Japan and the last game against the World League champions France. I said in the first press conference that we arrived with dreams and wishes, so we will try to realise our dreams.

After upsetting title-holders Brazil, Italy hopes to build upon their success with another win, this time against hosts Japan. Recently, Italy fell to Iran in five sets. One day later, they defeated Brazil by 3-2. Meanwhile, Japan is the only team at the 2017 Grand Champions Cup that is still in search of their first victory. Not only that, Japan will be seeking to win their first set in this tournament, losing in straight sets against USA on Tuesday and against France on Wednesday. Japan have now lost each of their last nine matches at the Grand Champions Cup and have won only one set in the process. Italy has won all their previous three World Grand Champions Cup matches against Japan and their last seven matches against Japan all together. Their last four victories all came in straight sets. Japan’s last victory over Italy in a major tournament came in the 2007 World League, when they won in five sets.

Japan coach Yuichi Nakagaichi: When I look back at our two games so far, I cannot say we have achieved what we wanted to or in the way we wanted to. So, it’s been very frustrating. Of course, all our opponents are top class, so we are expecting difficult matches ahead. Losing to the top teams is one thing but losing in a way where we didn’t appear to be fighting well is not good. In the coming games, I hope we can be more aggressive and confident so we can get as close as possible to our best level and also learn from these teams.

Italy coach Gianlorenzo Blengini: We’ve been here since yesterday and it’s a great place to play volleyball. There are lots of high-quality teams here and we’ve had some high-level matches, and it shows what a high-quality tournament this is. We’ve played two tiebreak matches. We knew it would be difficult, but want to play the best we can and give our all in every game. Some things went well and others not so well, but we want to keep trying to do the best we can. In our two games so far, the team showed that we never give up and give it our all. Before the tournament, we knew we’d be faced with tough situations and in our two games so far we were able to show these qualities. But it’s not always easy to show them in every game, but you have to try to do it every time you go on court.