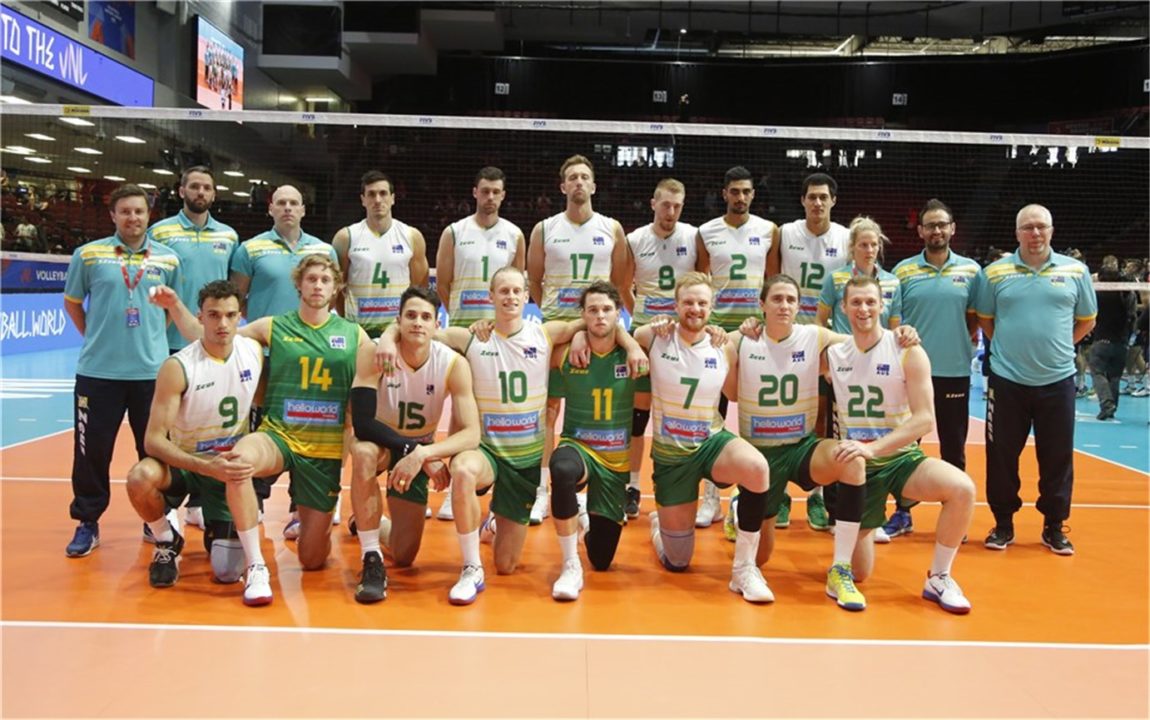 We talk about Volleyball being a truly international sport, but when you look at the Volleyroos about to play in the World Championships in Italy, you can see just how international and multicultural the sport, and our own team is. Current Photo via FIVB

The Volleyroos will compete against 23 other nations from all continents of the world, but the chances are they will have links one way or another with several of these teams.

Just look at our players and see their varied background:

–          Luke Smith, another Passer/Hitter has an Indonesian mother

–          Sam Walker, Passer/Hitter, was born in Thailand, but is of Australian nationality

And then there are their partners and children:

Opposite Paul Carroll’s wife Erin is American, so their two sons Nolan and Flynn are dual nationals (plus Dutch, due to Paul’s Dutch mother).

Luke Smith’s wife Lucie is Czech, and so their daughter Zara is as well (born in Finland!!).

Lincoln Williams, the Opposite, and his Estonian wife recently produced an Australian/Estonian daughter Diana.

Nehemiah and his Samoan/Australian partner Mara have a son, Kanaan.

The other father in the team, Travis Passier, and his wife Kirsty are true blue Australian and so is their son Louis.

Beau Graham’s partner Francine is French, and Max Staples’ partner Hanne is a Belgian track and field star, and a European Championship finalist.

Add to this the team staff:

Head Coach Mark Lebedew is an Australian of Russian extraction, who coaches in Poland (formerly in Germany and Italy), is married to Anita who is Polish, and their son Daniel is a dual national.

Assistant Coach Luke Reynolds (Australian) married Hilary, an American volleyballer in July.  The other Assistant Coach Liam Sketcher, also an Australian, has a Dutch partner Anna, who lives with him in Switzerland where he coaches.

Team Manager Giorgio Poetto is Italian, as is his wife Elena.

The statistician Hugh Nguyen is of Vietnamese heritage, and his wife is from Thailand.

But then have a look at where these guys ply their trade in leagues around the world when they are not playing for the Volleyroos:

Paul Carroll played in Germany for 8 years after college in the US, but this coming year will play in Russia.

Luke Perry was in the same club as Paul in Berlin, but moves to volleyball powerhouse Poland this year.  Joining him in Poland will be Arash Dosanjh (Switzerland last year), and Lincoln Williams, who has played in Germany and Estonia before.   Harry Peacock was in Poland for the season just past.

Luke Smith is moving from Portugal to the Turkish League, and Paul Sanderson from Tunisia to Romania.   Sam Walker will stay put in Estonia, Jordan Richards moves from Italy to France, and Thomas Hodges has signed in Austria.

Nehemiah Mote is keeping his options open, after stints in Germany and Switzerland, whilst Nathan Roberts will have a second year in Cannes, France – the first time he has stayed in one club for 2 seasons in his 13 year volleyball odyssey around Europe.

The team members enjoy each other’s company on and off the court and revel in Aussie atmosphere that exists when they get together as the Volleyroos, but spare a thought for Team Manager, Giorgio, who has the unenviable responsibility of pulling together and managing the maze of travel arrangements!