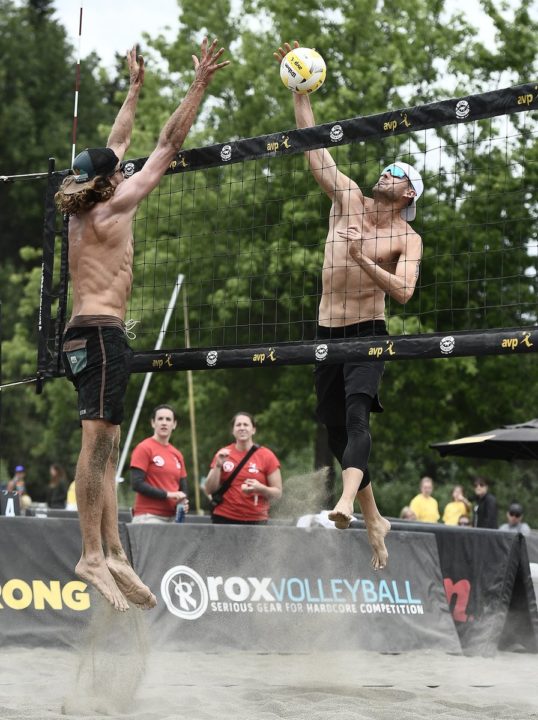 Action began at the Seattle Open with qualifiers on Thursday and four teams of each gender moving on to Friday's main draw. At the end of Friday, the top four men's seeds and top three women's remain in the winner's bracket.  Current Photo via AVP

Action began at the Seattle Open with qualifiers on Thursday and four teams of each gender moving on to Friday’s main draw.

Making it through on the men’s side were top seeded Maddison McKibbin/Riley McKibbin, No. 4 Marty Lorenz/Raffe Paulis, No. 6 Eric Beranek/Michael Brunsting and No. 18 Michael Boag/Skylar Del Sol.

After two rounds of main draw play, the top four seeds: No. 1 Phil Dalhausser/Nick Lucena, No. 2 Theo Brunner/John Hyden, No. 3 Taylor Crabb/Jake Gibb and No. 4 Billy Allen/Ryan Doherty are still in the winner’s bracket. Dalhausser/Lucena and Allen/Doherty both picked up a pair of straight set wins. Crabb/Gibb and Brunner/Hyden each rallied in their second round match to win in tiebreak.

Crabb/Gibb were down 14-9 in Set 3, but after the match-point freeze went into effect, the pair rallied with a six-point run, including four Gibb aces, to win 16-14 over Reid Priddy/Jeremy Casebeer.

Seeds 5-12 are still alive in the contender’s bracket.

The top three women’s seeds along with No. 12 Martin/Wheeler remain on the winner’s side of the bracket. Martin/Wheeler took out No. 5 Karissa Cook/Katie Spieler in straight sets, then bested No. 13 Knudsen/Sykora 21-19, 18-21, 15-13.

No. 1 Kelly Claes/Brittany Hochevar cruised through two straight set wins. No. 2 Emily Day/Betsi Flint edged past No. 7 Karolina Marciniak/Kendra Vanzwieten in the second round (21-19, 19-21, 16-14). No. 3 Caitlin Ledoux/April Ross, who teamed up for the weekend as Ross’ partner Alix Klineman is out with an injury, won twice in straight sets.

Day/Flint came back from down 14-12 to Marciniak/Vanzwieten in Set 3 to win 16-14 with the match-point freeze on.

In the contender’s bracket after falling in the opening round to Knudsen/Sykora, No. 4 Allison McColloch/Geena Urango crashed out of the tournament with a straight set loss to Cook/Spieler. Seeds 5-11 and 13 are still in the game. 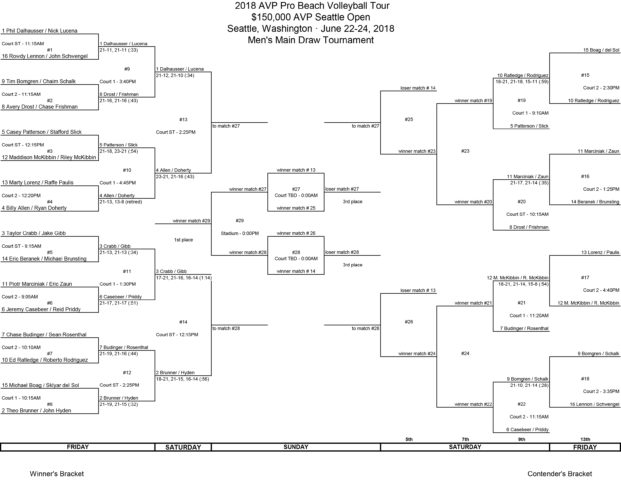 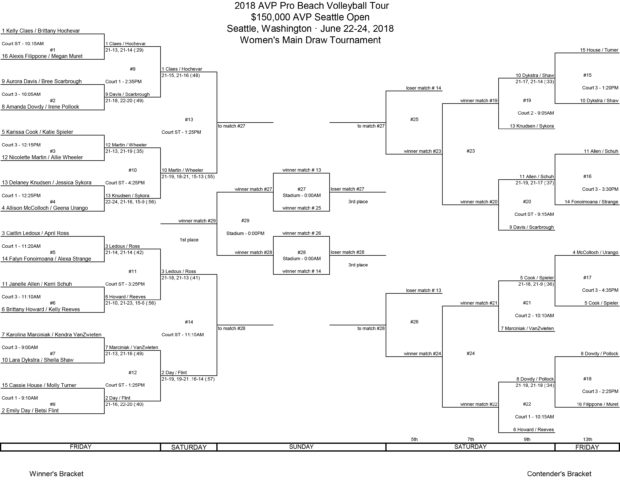