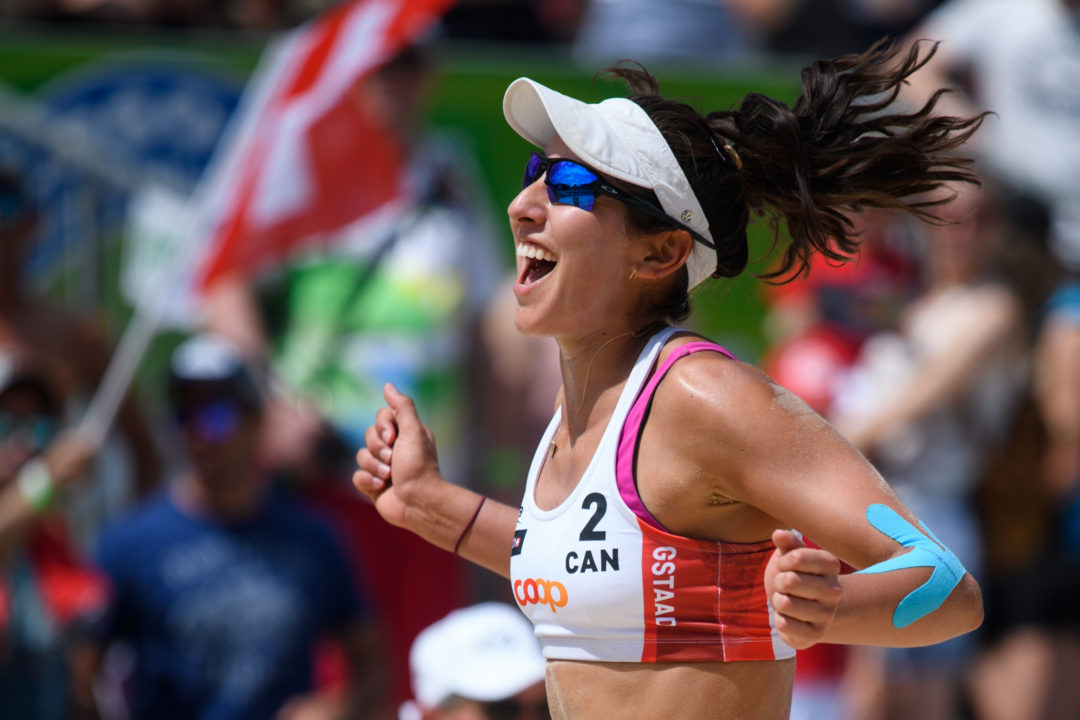 The top three women's seeds, including two Canadian duos, and defending Gstaad Major champions No. 7 Chantal Laboureur/Julia Sude will battle for a shot at the title on Sunday.  Current Photo via FIVB

The top three women’s seeds, including two Canadian duos, and defending Gstaad Major champions No. 7 Chantal Laboureur/Julia Sude will battle for a shot at the title on Sunday.

With men’s play wrapping up on Saturday, the women played just the quarterfinal round, with the semifinals and podium matches awaiting on Sunday.

No. 1 Melissa Humana-Paredes/Sarah Pavan and No. 2 Heather Bansley/Brandie Wilkerson, both of Canada, and No. 3 Agatha Bednarczuk/Eduarda ‘Duda’ Santos Lisboa of Brazil round out the field.

Agatha/Duda ended Americans’ Kelley Larsen/Emily Stockman‘s Cinderella run from the country quota matches to the quarterfinals, with a 20-22, 21-15, 15-7 comeback victory.

In addition to the defending champions Laboureur/Sude, Humana-Paredes/Pavan also were on the 2017 Gstaad podium, finishing third. Pavan also boasts a Gstaad medal from 2015, when she paired with fellow semifinalist Bansley for the bronze.

Agatha/Duda look to carry on a tradition of Brazilian success in Gstaad as the nation has put at least one team on the podium each of the last three years, including gold medals in 2015 and 2016 and silvers in 2015 and 2017.

The teams in both semifinals boast 2-2 records against one another. Humana-Paredes/Pavan won the last meeting with Agatha/Duda in the Xiamen Four Star semifinals in April. Bansley/Wilkerson topped their German foes for gold at the Warsaw Four Star on July 1.