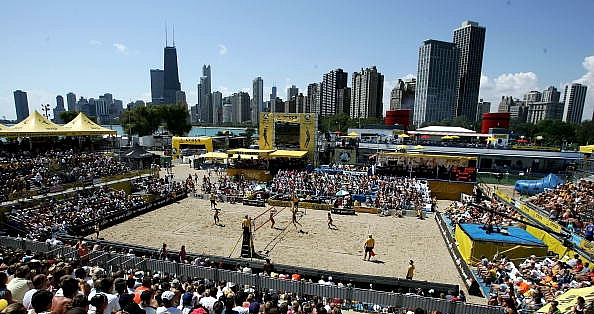 For the men, qualifying seeds 1-6 as well as the No. 25 and No. 26 teams survived to move on to Friday’s action. The top eight women’s qualifiers advanced. Archive Photo via AVP

Eight men’s and eight women’s teams advanced through qualifying on Thursday to earn spots in the main draw of the AVP Championships in Chicago.

For the men, qualifying seeds 1-6 as well as the No. 25 and No. 26 teams survived to move on to Friday’s action. The top eight women’s qualifiers advanced.

For the women, No. 5 Bre Moreland and Allie Wheeler were the lone team to play more than straight sets in the two-match road to the main draw. The pair rebounded from an opening set loss to No. 28 Haley Paakaula and Chelsea Ross to win the opening round match (18-21, 21-12, 15-8).

It was a mixed bag of results that pushed the the top six men’s qualifiers and two surprise contenders in No. 25 Kacey Losik and Garrett Wilson and No. 26 Patrick Bolton and Luis Del Valle to the main draw.

The top ranked men’s team in qualifying, Branden Clemens and Ben Vaught made their way through three straight set wins, after eeking out their opening set of the tournament 23-21 over No. 64 Maksym Gladun and Tomas Goldsmith.

No. 2 Raffe Paulis and Jeff Samuels cruised to an opening round win over Kyle Condon and Mike Sauro (21-7, 21-9), but had to fight through a pair of three setters after that to sew up their spot in the main draw.

No. 3 David McKienzie and Ian Satterfield also had to get through two extended matches to advance, including dropping the first set of the third round to Bruno Amorim and Ozz Borges, before rebounding for the win (18-21, 21-16, 15-10).

No. 5 Brian Cook and Tim May won had just one set decided by two points in a trio of straight set wins.

No. 6 Paul Lotman and Gabriel Ospina edged past No. 22 Alexander Kammermeier and Tal Shavit in three sets to grab their third win of the day.

Losik and Wilson did not allow a foe more than 18 points in a trio of straight set wins.

Bolton and Del Valle ended the day with two three-set wins to be the lowest seed to move on the main draw. The duo dropped the first set of its finale, but rebounded for the 21-23, 21-16, 15-10 win.