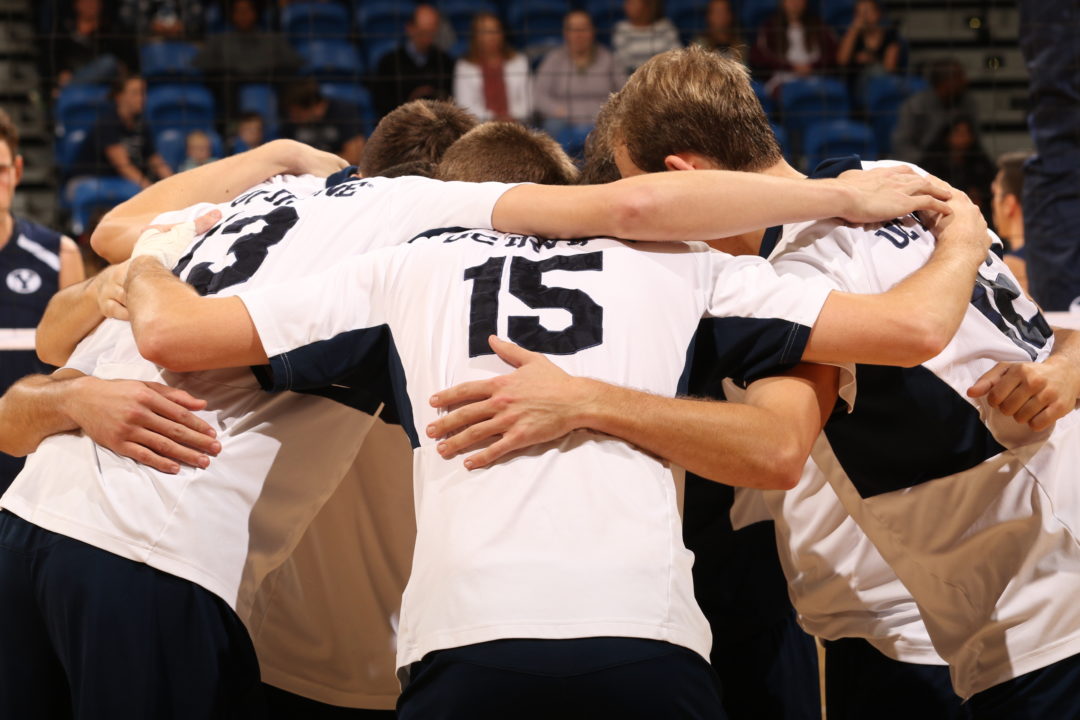 UC Irvine comes out on top with a sweep on senior night. Archive Photo via UC Irvine Athletics

IRVINE, Calif. – After losing to UCSB in five sets on Thursday night, the Anteaters came back with a vengeance on Saturday, leading to a clean sweep of the Gauchos in the last game of the regular season. Following the match, UCI seniors Logan Zotovich, Reid  Dominguez, Tucker Pikula, and Ben Sebastian were honored.

Irvine was led in kills by Scott Stadick (.625) and Aaron Koubi (.529) with 12 and 11 kills, respectively. Kobe also led the defense with seven digs on the match. Setter, Dante Chakravorti, led the team in assists (40) and added six digs.

Leading the UC Santa Barbara offense was outside hitter, Roy McFarland, with 13 kills on a .280 clip. He added seven digs to lead the defense as well. Brandon Hopper also had an impressive night with seven kills and zero errors on a .778 hitting percentage. Setter Casey McGarry ran the offense with 35 assists and added 6 digs and a service ace.

Both teams will compete in the Big West Conference Tournament starting next Thursday.

The Anteaters will wait for the outcome of the Hawaii/Long Beach State match in Honolulu beginning at 10:00 p.m. PT to determine Big West Championship seeding. If Hawaii loses, UCI is the No. 2 seed, but if the Warriors win, UCI ties Hawaii for second place in the league standings and will be the No. 3 seed due to a tiebreaker.

Stadick was as offensively potent as defensively tonight, putting away a team-best 12 kills, while hitting .625 (12-2-16). He recorded seven total blocks, including two solos.

In the first set, UCI took a 10-7 lead on consecutive kills by Austin Wilmot, Joel Schneidmiller and Karl Apfelbach. A pair of Scott Stadick kills and a Stadick and Schneidmiller block extended the margin to 17-10. The Anteaters would win the set 25-18, hitting .481 (14-1-27). Stadick would record four kills and five total blocks (2 solo, 3 assists) in the game.

In a tightly contested second set, the action came down to the final two points where Apfelbach and Koubi put away kills in give UCI the 30-28 victory.

UCI made a move in the third set 18-15 on a kill by Schnedimiller and three Gaucho errors, one a block by Apfelbach and Wilmot. UCSB would close to 23-20 until a Schneidmiller kill stopped the momentum, 24-20. Following a Gaucho kill, Koubi ended the match with a kill, 25-21.

NOTES: Stadick improved his season solo block school record total to 30…UCI has totaled 20 or more wins for the ninth time in program history…The Anteaters had 41 attempts in the second set which is the most in a game this year…UCI’s .456 hitting percentage (48-7-90) is the second best this year…It is the 11th sweep of the season….Big West Championship page

IRVINE, Calif. – Two days after a pulling out a five-set thrilling upset over No. 3 UC Irvine at Rob Gym, the UC Santa Barbara volleyball team took on the Anteaters once again and fell 3-0 (25-18, 30-28, 25-21) in the regular season finale at the Bren Events Center on Saturday night.

The two teams went back and forth in the early going of the first set and the Gauchos evened the score at 7-7 after back-to-back points on a Connor Drake kill and a UCI attacking error. From there, however, the Anteaters went on a 10-3 spurt highlighted by a pair of kills from seven-footer middle blocker Scott Stadick. UCI held on to its lead throughout the rest of the set to top UCSB 25-18 and take an early lead.

The second set needed extra points to be decided in a thrilling game that no team led by more than two points at any time. Trailing 24-23, the Gauchos called timeout and executed a play that finished with a Keenan Sanders kill to tie the score at 24-24. UCSB staved off five consecutive game points from the Anteaters, but were unable to get over the hump and dropped the set 30-28 after back-to-back kills from UCI.

The Anteaters continued their momentum to take a 5-2 lead to open the third, but the Gauchos bounced back with an 8-3 run helped by three McFarland kills to take a 10-8 lead. With the score tied 15-15 moments later, UCI rattled off three straight points on a few Gaucho attacking errors and were able to hold the lead to take the set 25-21.

McFarland finished with a game-high 13 kills while adding seven digs and Spencer Fredrick tallied nine kills to go with seven digs. Casey McGarry dished out 35 assists on the night while adding six digs.

Stadick finished with 12 kills to lead UCI while Aaron Koubi and Karl Apfelbach totaled 11 and 10, respectively. The Anteaters were a force to be reckoned with at the net tallying 19 total blocks compared to two for UCSB.

UCSB concludes the regular season 11-12 overall and 4-6 in conference and will compete in the Big West Tournament next week starting on Thursday, Apr. 19 at the Walter Pyramid in Long Beach, Calif. Stay tuned to UCSBGauchos.com for more information.