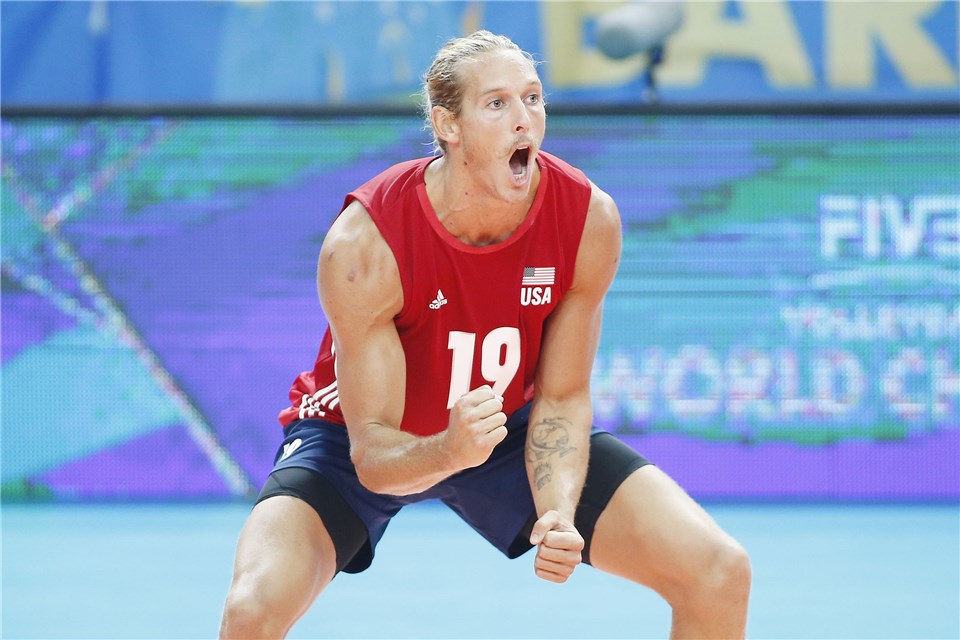 Taylor Averill led the match with 4 aces in a 3-0 win over Cameroon. Serbia defeated Australia to remain within striking distance of the top of Pool C.  Current Photo via FIVB

Serbia separated themselves from Russia at 2nd place in Pool C. Russia has a match in hand, and will make that up on Monday when they play Cameroon. With the United States having one match against win-less Tunisia, the battle for 2nd place will come down to Tuesday’s match between Russia and Serbia. Cameroon and Australia both fell to 1-3 in the pool. Australia has a match against Tunisia on Monday.  A win will likely see them through to the next round.

Serbia moves into 2nd place by themselves in Pool C with a 3-1 win over Australia. They have one match left against Russia in a match that will likely decide the runner-up position in the pool. Australia committed 10 more errors, and Serbia earned 7 more aces from the service line. Those categories accounted for the 15-point advantage between the two. While Australia was able to fight back and take the second set, Serbia fired back to get the win and the full 3 points.

Srecko Lisinac achieved the rare feat of leading the match in scoring as a middle blocker. He led the match with 13 kills, added 3 blocks, and pulled of 2 aces to post 18 points. Serbia;s other middle blocker, Marko Podrascanin, scored 12 points on 8 kills and a match-high 4 blocks. Nemanja Petric scored 15 points from the outside from 13 kills, 1 block, and 1 ace. Marko Ivovic led the match from the service line with 4 aces. He also contributed 7 kills and 1 block.

Aleksandar Atanasijevic was back in the lineup for Serbia after getting the day off on Saturday.  He jumped back on the floor and scored 12 points on 12 kills and hit 54.5%. Nikola Jovovic remained consistent with his hands and set Serbia to a 60.4% attack average in the win.

Austraila was led by Max Staples‘s 12 points on 12 kills with a 44.4% hitting percentage. Paul Carroll started every set at the opposite position and finished with 10 points from 9 kills and 1 ace. Beau Graham scored 10 points in the middle on 7 kills, 1 block, and 2 aces. Graham was nearly perfect with a 87.5% attack average and led his team in production from the service line. Lincoln Alexander Williams came onto the floor in the 4th set and scored 5 points from 5 kills.

While the United States is a perfect 4-0, they had not earned a sweep until today. The 3 points they earned puts them at 10 points, tied with Serbia (though they have a better record). Jeff Jendryk made his first start of the tournament and scored 9 points in the middle for the United States. His points came from 6 kills, 1 ace, and a match-high 2 blocks. Taylor Averill started opposite of Jendryk at the other middle blocker position and scored 9 points on 4 kills, 1 block, and a match-high 4 aces.

Matt Anderson led the match in scoring with 11 points. He put away a match-high 9 kills, 1 block, and 1 ace. Anderson hit 75% and is 3rd on the list of top scorers for the tournament. Captain Taylor Sander scored 9 points on 6 kills, 2 aces, and 1 block while hitting 66.7%. Aaron Russell hit 41.7% on his way to earning 5 kills. He also chipped in a block and an ace to finish with 7 points. Micah Christenson scored a point from the service line and set the United States to 63.2% hitting percentage in the sweep.

Ben Patch, Kawika Shoji, and Kawika Shoji all got action in the final set the match. Patch finished the match with 2 points, and Langlois registered 4 points in the score book for the United States.

“After such an emotional match last night, it was our goal to come out with energy and focus for this match,” U.S. libero Erik Shoji said. “Cameroon is a good volleyball team, so it was important for us to execute on our side of the net.”

David Feughouo led Cameroon with 10 points on 6 kills, 2 blocks, and 2 aces. The starting opposite only played for the first 2 sets before being replaced by Yvan Kody. The replacement opposite scored 5 points on 4 kills and an ace. Junior Engohe finished the match with 6 points on the left side with all of his points coming from kills.