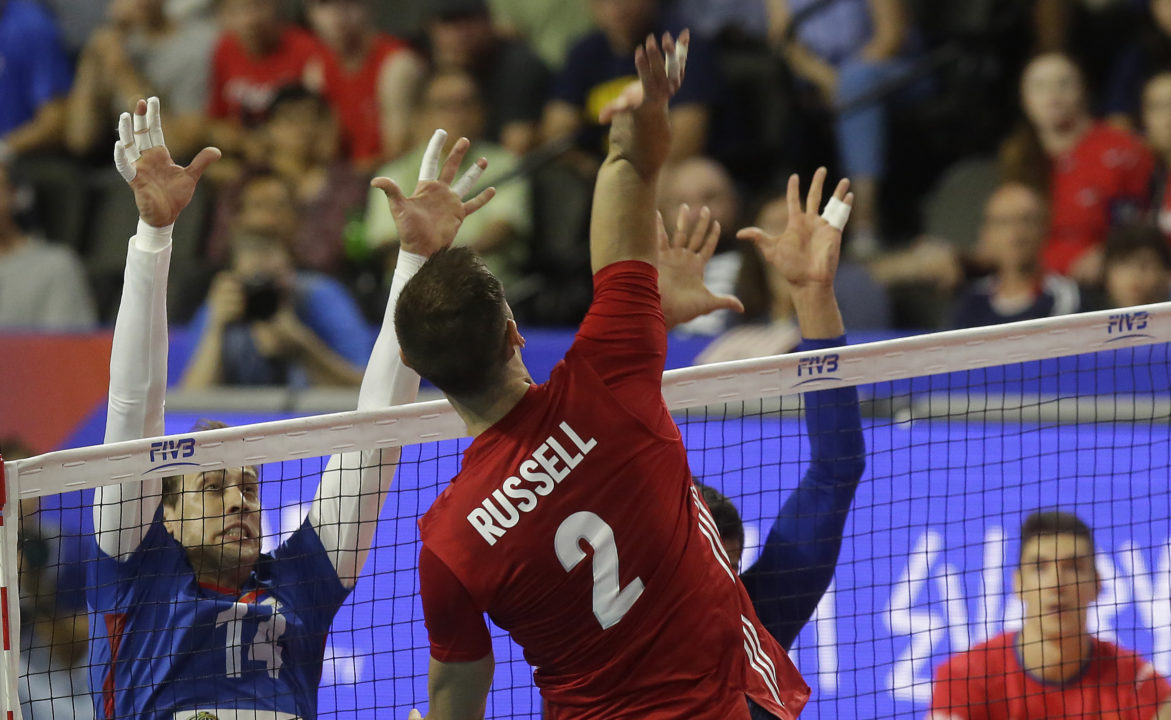 The United States dominated Serbia in every way and Aaron Russell and Matt Anderson led the way with double-digit scoring efforts as the Americans kicked off a three-match homestand in Hoffman Estates, Illinois.  Current Photo via FIVB

The United States dominated Serbia in every way and Aaron Russell and Matt Anderson led the way with double-digit scoring efforts as the Americans kicked off a three-match homestand in Hoffman Estates, Illinois.

“We passed really well which allowed us to run a great offense,” Micah Christenson said. “The more we play , the greater the connection. It feels great to play at home.

Anderson led the offense with 11 kills, part of his 13 points alongside two aces. Russell followed with 10 putaways, a team-high three aces and a block for a match-high 14 points. Thomas Jaeschke tacked on nine points on seven kills and two blocks, before exiting the game with a knee injury in Set 3. Four other players chimed in three or more points in the match. Max Holt and David Smith added six apiece, while TJ DeFalco managed five points despite playing just in Set 3. Holt and DeFalco put up two blocks apiece.  Christenson rounded out the scoring with three points on two kills and a block. DeFalco was the only non-starter to play in the match.

Uros Kovacevic was the top scorer for Serbia with seven points, all on kills. Eight other players scored for the Serbians. Marko Ivovic checked in with five kills and a block, while Srecko Lisinac added three putaways and a team-best two blocks. Aleksandar Atanasijevic and Drazen Luburic chipped in four points apiece, all on kills, despite each playing in just two sets.

The Americans boasted a slight edge throughout the opening set. At 22-21 the team showed its flexibility and depth as Christenson registered a kill of his own, setting it deep in the court. Team USA went on to win 25-22.

Jaeschke starred offensively in Set 2 as the USA outdid Serbia 14-9 in kills. The Americans also outblocked the Serbians 3-1 in the stanza.

Jaeschke’s injury in Set 3 slowed the Americans momentarily, but DeFalco picked up the slack in the 25-14 win.