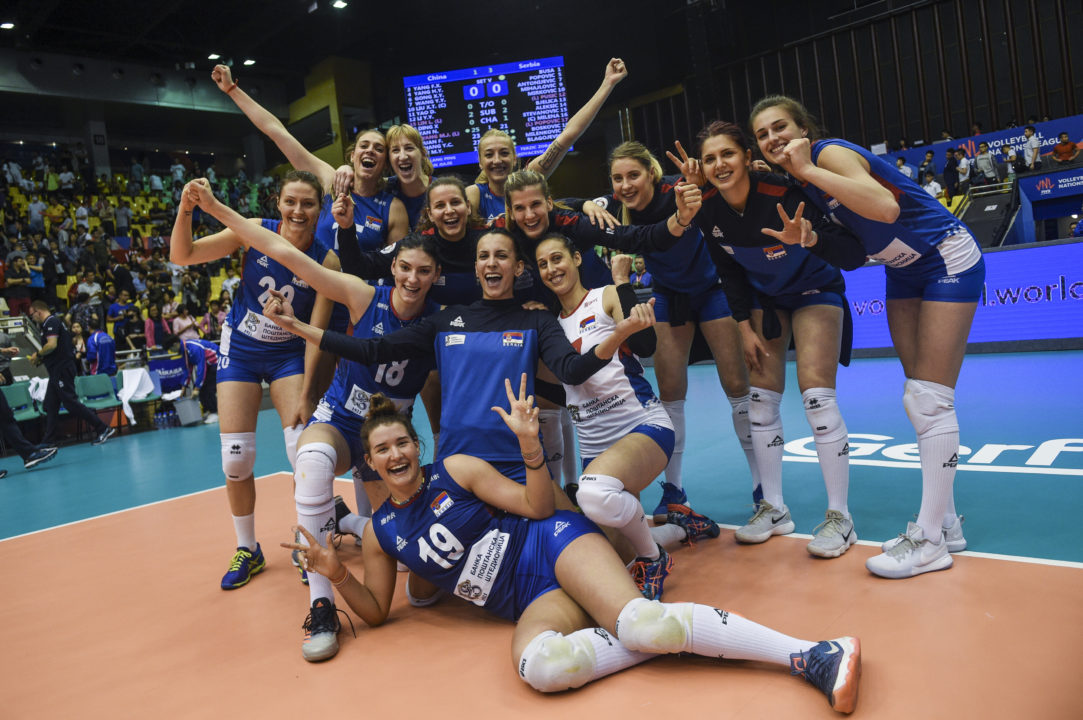 After two weeks of competition, the leaders have begun to pull away, with a group of five teams standing at 5-1. The United States, Brazil and Serbia each went 3-0 on Week 2 to move into the top three spots. Current Photo via FIVB

After two weeks of competition, the leaders have begun to pull away, with a group of five teams standing at 5-1.

The United States, Brazil and Serbia each went 3-0 on Week 2 to move into the top three spots. Turkey stumbled against Brazil and the Netherlands suffered its first loss against the USA, checking in with 14 points apiece to round out the Top 5.

Both the USA and Netherlands closed out the week with sweeps, besting Belgium and Japan respectively in Pool 5 on Thursday.

Pool 6 saw Russia, South Korea and Italy each register two victories, with Italy notching a surprise sweep of the host Koreans on Thursday.

Serbia closed out its stay in China with a four-set win over the host team in a rematch of the 2016 Olympic final. Meanwhile, China has lost four straight, dropping all three of its Week 2 matches at home with a lineup riddled with holes after the call up of three players to the 2018 World Military Championship.

Brazil cruised through Pool 8, dropping just one set, while Turkey rebounded from its opening loss to the Brazilians with a four-setter over the Dominican Republic and a sweep of winless Argentina.

Brazil will face a tough test on Week 3, heading to the Netherlands, meanwhile Serbia heads home for a slate including Russia and Turkey.

The United States head to Thailand to face Germany, the Dominican Republic and the host Thai team, which are all in the bottom third of the standings.

China and Japan headline the teams heading to Hong Kong for Week 3, but the Chinese will continue to play without its star Yuan Xinyue for two more weeks.