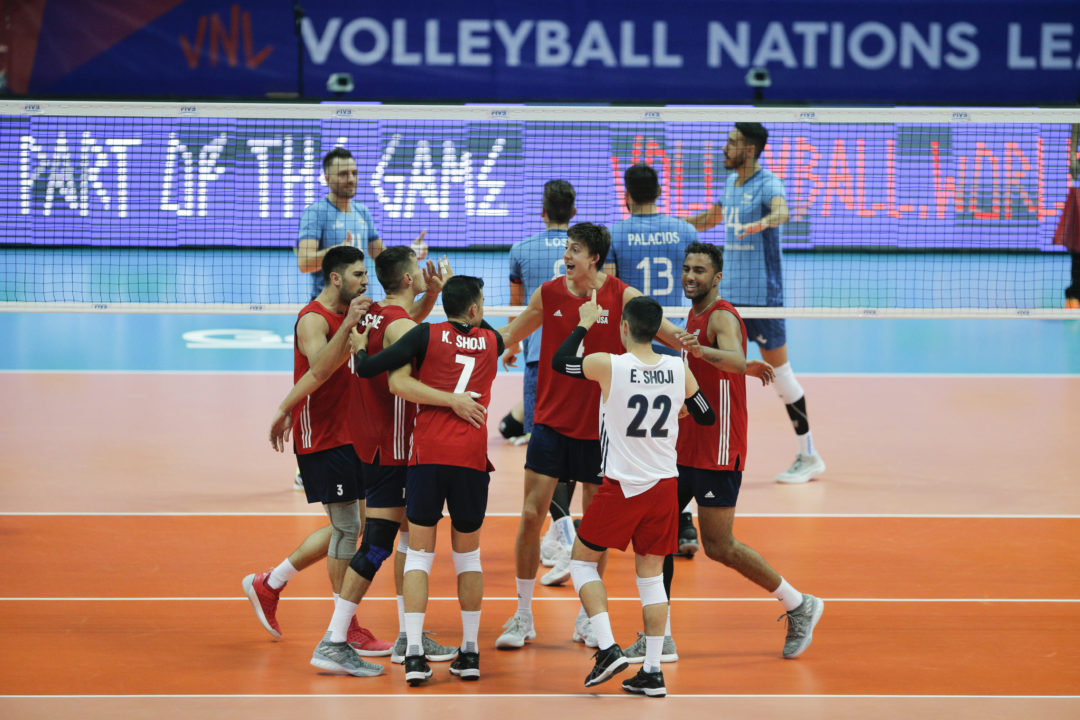 After being edged in extra points in the first two sets, thanks in part to a stellar effort by Argentina's Pablo Crer, the United States regrouped and rallied for a five-set win behind a 23-point effort by Ben Patch. Current Photo via FIVB

After being edged in extra points in the first two sets, thanks in part to a stellar effort by Argentina’s Pablo Crer, the United States regrouped and rallied for a five-set win behind a 23-point effort by Ben Patch.

In the decisive fifth set, Patch downed two kills and setter Kawika Shoji added a third as the U.S. went up 6-2 and never looked back, hanging on for the 15-10 win to complete the comeback.

Sander, Jendryk and Smith each put up three stuffs to lead the Americans at the net. Shoji served up two of the team’s five aces.

The Americans faced match point at 24-23 in Set 3, but Patch kept hope alive by tooling the Argentine block. David Smith then added a kill and a block to win Team USA the set at 26-24.

The United States led 14-13 at the midway point in Set 4 and extended their advantage with a Jaeschke kill and a Kawika Shoji serving run, including an ace, en route to a 25-21 win.

United States coach John Speraw: “Before the match started, we knew this was our first match of the summer. I didn’t expect perfect volleyball, and there were no surprises. So I am proud of my players for standing together to improve. That’s what I said in the first couple of sets: just keep getting better and keep working hard. And we did that. It’s difficult to make a comeback win after 0-2,  I am very satisfied that we won the game. And good luck to Argentina in the rest of the tournament.”

United States opposite Ben Patch on how his team cam back from two sets down: “You know I think that question starts before the match. Our team prepared really well mentally and that is a huge focus for us, for our team always it is how do we respond to everything in a moment. We are here to win and we are here to get better. So our goal is to gain every point in matches. Just be present in the moment and that helps in going forward in the game. If we get down, if we start losing, it is always the same that we going to focus on. And then, obviously, things change. So I think it is a matter of preparation.”

Argentina coach Julio Velasco: “I would like to congratulate the United States, because they got better and better, and finished stronger than our team. In the service area, I think in the first two sets, US made too many mistakes, and so did we. After that we started to serve too easy.”