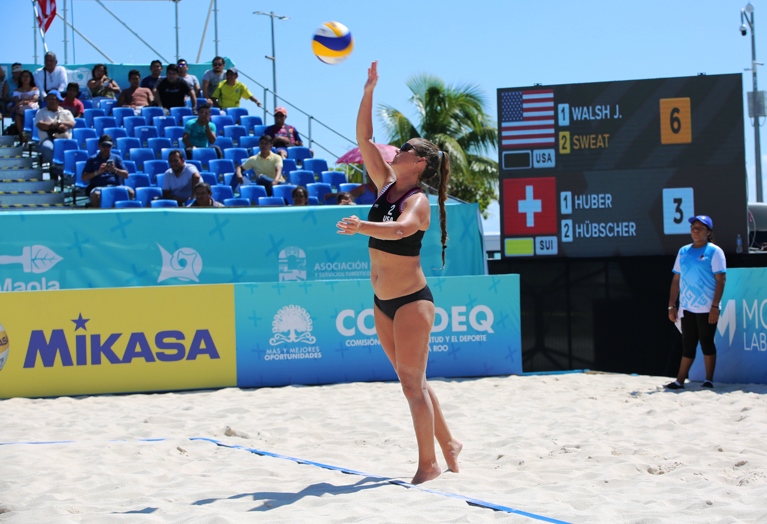 After 32 pool play matches on Thursday, the women’s field was narrowed from 32 to 24 with eight pool titles and accompanying free passes to the Round of 16 being awarded.

Six of the top eight seeds won pool play titles with No. 4 Riikka Lehtonen/Niina Ahtainen of Finland and No. 7 Jolien Sinnema/Laura Bloem of the Netherlands being the exceptions. Each won their opening round matches in straight sets before falling in pool title matches.

Americans Brittany Howard/Kelly Reeves lost to Taina/Victoria in the Pool F title match (21-15, 21-17) after downing countrywomen Kim DiCello/Irene Pollock in the opening round (21-16, 21-16).

DiCello/Pollock bounced back with a tiebreak win over Canadians Julie Gordon/Shanice Marcelle (21-16, 12-21, 15-9) to claim a spot in Friday’s elimination matches in her first tournament back since giving birth to her son in June.

“I’m so thrilled to be back,” DiCello said. “It’s an honor to be here and play against the best again. Irene called me to fill for her partner and I couldn’t say no. We’re going to play each match better than the last. It was so hot in our first game and we faced a really talent team, but we really enjoyed ourselves there and learned a lot. We’ll take these lessons for tomorrow.”

Kimberly Smith/Jace Pardon and Caitlin Ledoux/Geena Urango also moved on to Friday’s action, winning their second round matches to claim the third place spot in their respective pools.

The first elimination round is slated to begin at noon ET Friday, while Round 2 begins at 4 p.m. ET.