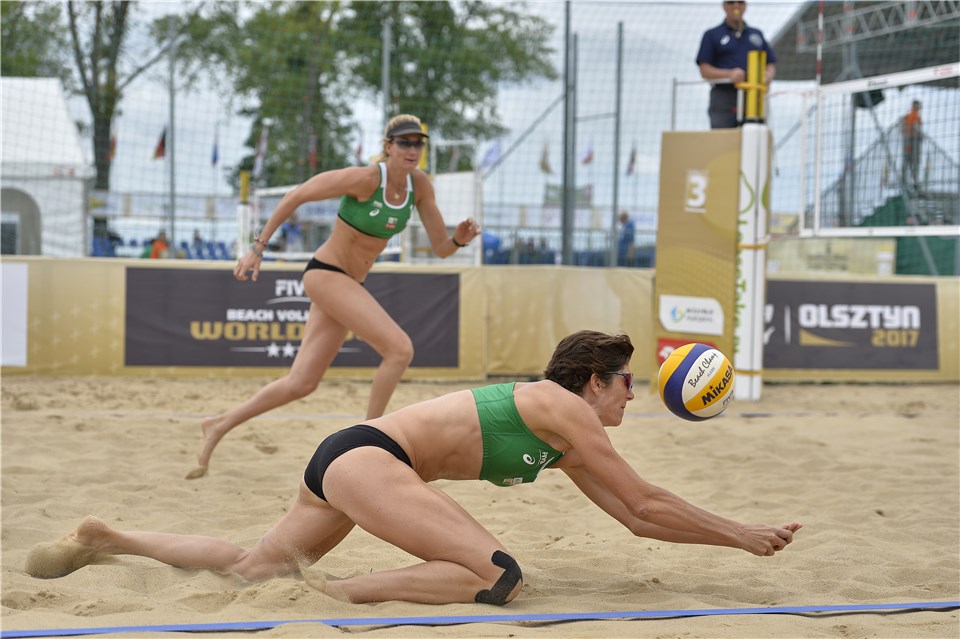 Three-time Olympic gold medalist will be looking for a new partner to make her push to the 2020 Tokyo Games with after splitting with Nicole Branaugh this week.  Current Photo via FIVB

It has been an up and down last 18 months for Kerri Walsh Jennings, including offseason surgery, splits with two partners and the founding of her own beach volleyball tour/entertainment series.

Yes, two partners. After teaming up with Nicole Branaugh in May 2017, the duo announced they are calling it quits on Thursday.

“I had a truly special year playing with Nicole,” Walsh Jennings said. “We had some highs and lows on the court with regard to our finishes, yet the year we spent in partnership was such a gift and a ton of fun. Nicole is a dynamic athlete and a wonderful human being; I’m excited for all that she has in store for her.

“With regard to my next partner, I have no announcements to make. This is all still very fresh. I will make sure to reach out to the athletes with who I believe we can go all the way, to the top, together. I don’t want to bounce around, I want to find my girl, secure our team and get going on the business on growing and winning.”

The pair was set to compete in the country quota match at the Vienna Major next week, but has since withdrawn. Neither has announced a new partnership, though the 39-year old Branaugh is playing in the AVP Hermosa Beach Open this weekend with Allie Wheeler.

The three-time Olympic gold medalist split with partner April Ross in May 2017 after Ross opted to stay on the AVP Tour amidst Walsh Jennings contract despite with the organization. The pair earned a bronze medal at the 2016 Olympics in Rio.

Walsh Jennings appeared to be back in the game for good, pairing up with 2008 Olympian Nicole Branaugh in late May 2017 with the duo talking about a run at the 2020 Tokyo Olympics.

All was jiving for the duo as it advanced to the semifinals of the Olsztyn Four Star in Poland in July following ninth place finishes at the Gstaad Major and Long Beach Presidents Cup. Then, at 14-14 in the third set of the team’s semifinal match against Canada’s Melissa Humana-Paredes/Sarah Pavan, disaster struck as Walsh Jennings dislocated her shoulder diving for a ball. The pair pulled out of the remainder of the tournament and was forced to withdraw from the World Championships the following week in Vienna.

The injury marked the end to the season for Walsh Jennings and brought on offseason surgery on both her ankle and her shoulder.

In February, Walsh Jennings discussed her offseason woes and said she was planning to return to the sand at the Xiamen Four Star in April.

“I had my shoulder surgery in September and prior to that I had my ankle surgery,” Walsh Jennings said. “So, I am feeling very, very optimistic about this run to Toyko. I actually plan on qualifying and plan on going for gold alongside my partner Nicole Branaugh, who is a champion in so many ways.”

Unfortunately, the pair’s return to the FIVB stage did not bring the same strong results as the 2017 campaign. The duo’s best outing of the spring was a fifth-place effort at the Warsaw Four Star on July 1.

In between all of the FIVB stops, Branaugh continued to keep her game up on the AVP stage. On June 10, Branaugh teamed up with Brandie Wilkerson at AVP New York, finishing as runnerup to Sara Hughes/Summer Ross.

Walsh Jennings is apparently still looking ahead to the 2020 Olympics and there is no bad blood between the friends.

3x Olympic champion @KerriLeeWalsh checks in at the two-year mark of her 2020 journey. #TokyoOlympics | @USAVBeach pic.twitter.com/pnlVGbTAxE

Thanks @usavolleyball 🙌 I LOVE @NicoleBranagh and I look forward to supporting my friend as she chases her dreams ✨ Great fun is coming for both of us ❤️🙌🇺🇸❤️ https://t.co/duTFAYYS7F