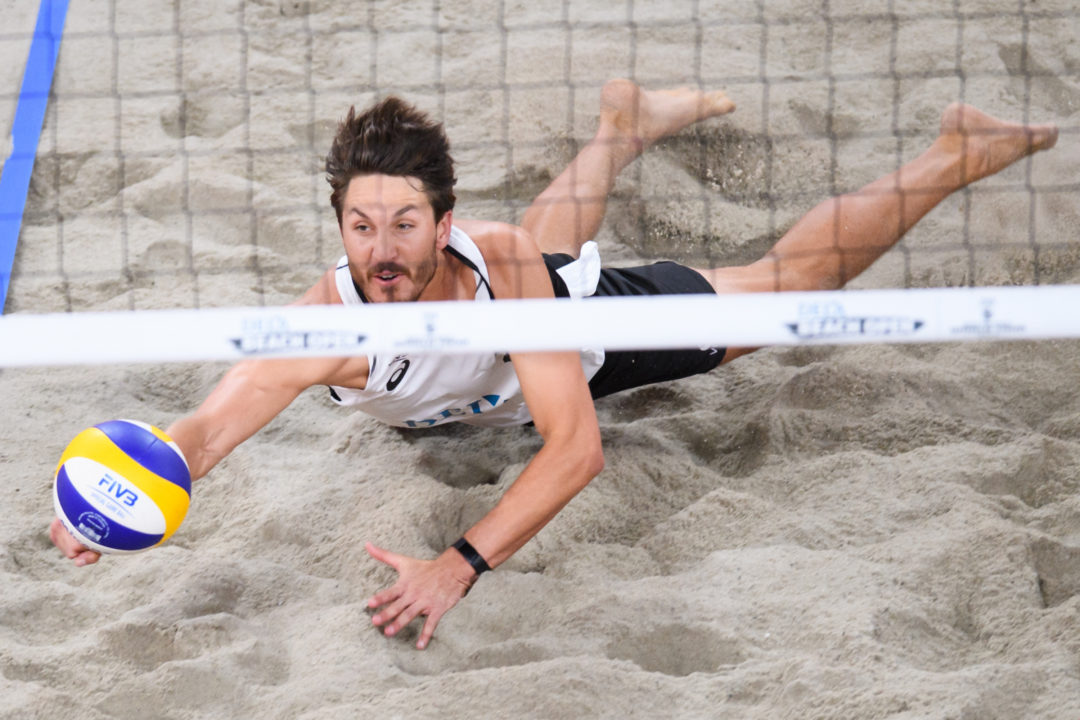 Twenty-eight year old Miles Evans talks about living his dream of being a beach volleyball player, the lessons he has learned from his partner Bill Kolinske and several of his idols, and his adventurous side.  Current Photo via FIVB

The 28-year old Evans talks about living his dream of being a beach volleyball player, the lessons he has learned from Kolinske and several of his idols, and his adventurous side.

1.  What drew you to Kerri Walsh Jennings, p1440 and the sponsorship? What difference has that made for you on the FIVB Tour and beyond?

Bill Kolinske was really pushing for something bigger to be apart of and I took his advice to fight for something different. I have followed Kerri’s volleyball career since 2005 when I first learned about beach volleyball and knew that if she was starting something it would be done right and with a lot of experience. Between Bill’s advice and the belief that what Kerri is doing could be great, I decided to be apart of p1440 and I’m very thankful I did. The sponsorship has enabled me to travel to at least 12-14 events this year and really further along my learning curve and gain much more experience playing internationally. Without p1440’s sponsorship I wouldn’t have been able to gain this valuable experience.

2. Bill partnered with Casey Jennings on the beach tour. For both of you, what have you learned from veterans of the game like Jennings and others?

I’ve been around Casey on the beach a decent amount now and I’ve learned a lot of great useful tips that only someone that had been on tour for a long time would know. He taught us how to calm your breath and lower our heart rates when the pressure is on or when we are fighting for air after a long rally. He has given very useful advice to focus on certain aspects of the game we can control before each next point to not let our minds wander and keep us in the moment. I’m very thankful I’m partnered will Bill because he has learned so much from Casey and is able to teach me a lot of what he has learned.

3. Men’s beach volleyball in the United States has been in flux over the last few years amidst several partner changes and with Phil Dalhausser/Nick Lucena carrying the banner. What are your thoughts on the state of American beach volleyball today?

I think that the US has been very dominant in beach volleyball in the last two decades and has done extremely well internationally and in the Olympics for both genders. I think some players choose to play with their partners not for their best interest in being the dominant team in America. I believe certain individuals in the US could play with a different partner that would make them succeed further along and for the Olympics but animosity and politics in the sport have separated a few individuals who would be our best team if they played together. I think our state of beach volleyball in the US is lacking in experience and commitment compared to most other countries currently. There isn’t enough financial support for people in the US to want to commit full time to playing beach volleyball and rise to their full potential. A lot of athletes seek other forms of income and essentially give up on the dream of doing beach volleyball full time as a career.

4. Since teaming up, you have had a variety of results over the last year, including podium finishes in Sydney and Aalsmeer last fall and top 10 efforts at the Lucerne and Haiyang Three Stars? What has been the key to your success?

I think the key to our success is our commitment to this sport and giving it everything we can to improve while investing all of our finances and resources to get better and better. Between Bill and I, one key element that has been a factor in our success so far is our communication during each match. I feel that a lot of the time we are on the same page and devise intelligent game plans that can flip on a dime each moment, but we are always communicating to each other what we could implement in each game. I think both of us are instinctual and make plays based on our experience so far, while using our instincts. We are both giving this sport as much as we can so we can get as much out of it as we can so we can walk away with little to no regrets.

5. You have played several of your American cohorts on the FIVB Tour, including at the Vienna Major. Is there a different mindset when you are playing a team you are more familiar with?

We always want to prove ourselves against the other American teams because we don’t play on the AVP tour and any chance we get against these teams we take it as our Super Bowl and give extra effort to prove we are one of the top teams in our country. We enjoy when we get the opportunities to play against other teams from the US. I personally want to prove to everyone in the US that we belong playing against the best in the world and in order to do that we have to play against our country most of the time in Country Quotas and Qualifiers to do so.

Bill and I are realizing what it takes to succeed at the highest level of play and we both are finding resources to learn from in order to better our play. Bill has been a huge mentor for me and has taught me in order to play at the highest level our commitment to this sport has to be every moment of the day and we can’t take breaks. The rest of the world is very elite in this sport and we constantly asking the top players their regiments and try to emulate that. Our goals are to make the Olympics and dominate on the world tour. We want to be one of the top 5 teams in America consistently for the next 5-10 years.

7. How has your partnership changed since you joined forces?  What are your goals for the future?

Bill is a very intelligent person and one thing he is able to do in this sport is pick up on when to attack a certain player at a certain time of the game. He is very cerebral in the sense that he uses his intelligence and devises great game plans in order to beat some very good teams. He isn’t the highest jumper or move the fastest but he works with what he has and finds a way to win. I admire his work ethic and his commitment to this sport and is a great role model to aspire to.

8. What is something not many people know about you?

I’m a very friendly person and enjoy being surrounded by people, I don’t necessarily like to be alone a whole lot. I love the outdoors and am a big risk taker, I would say I’m adventurous and would do some things most people would be nervous to do. I love storms and other nature, I would go film tornadoes, lightning, hurricanes and tsunamis if I was given the chance.

So far the tropical regions have been my favorite places to play. I love the tropics and making a vacation out of the events before and after the tournament. My favorite places I’ve played are Cuba, Australia, Jamaica, Seaside Oregon, because the crowd is amazing, and I really enjoyed Amsterdam. I mainly enjoy the places I have the best results in as well 🙂

One of my favorite moments playing beach volleyball was when Bill was sick and was at 60-80% energy level all day in the NORCECA Qualifier in Manhattan Beach 2017. We beat some of the top US teams and no one expected us to win. We ended up winning the tournament and Bill was dying the entire time and no one knew. The tournament was supposed to qualify us for a double points big NORCECA tournament in Jamaica. It ended up falling through so we didn’t get anything out of it except knowing that we are one of the top teams in the US and have great potential together. After that day I knew I could play with some of the athletes I’ve idolized for a long time.