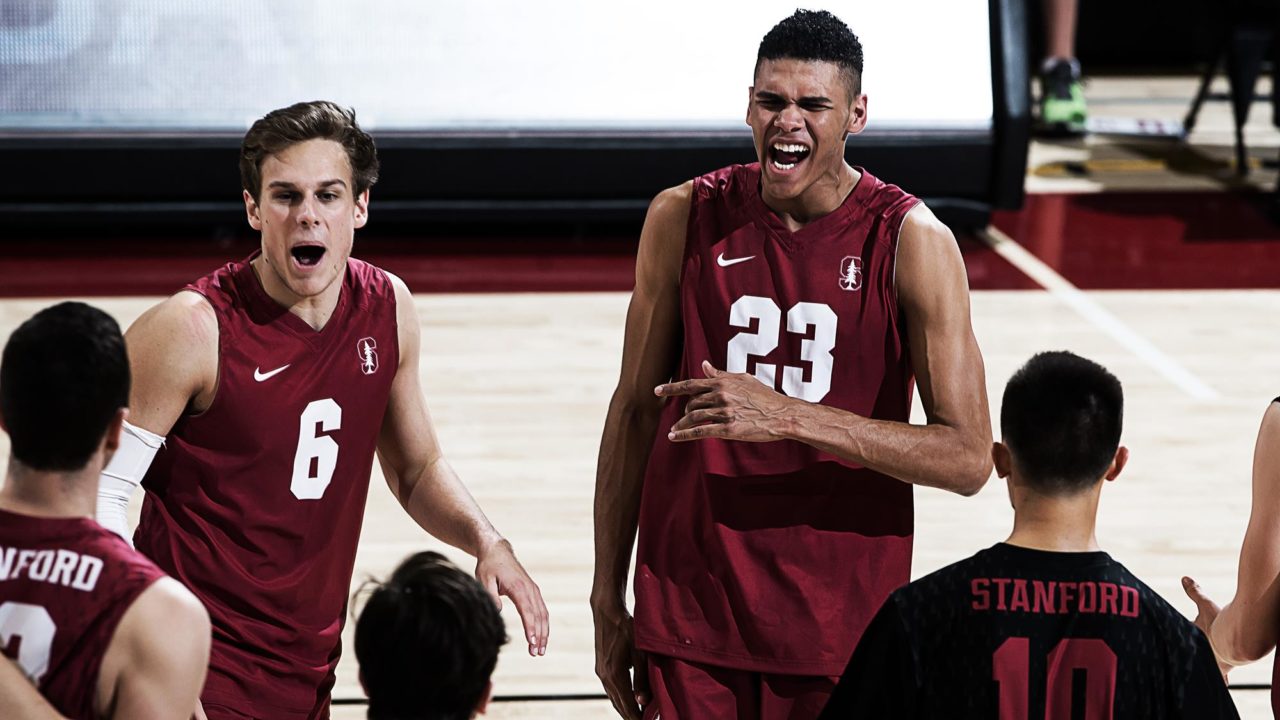 No. 5 BYU stayed perfect at the Outrigger Invitational in Honolulu, edging No. 8 Lewis in four sets, while back... Current Photo via Stanford Athletics

No. 5 BYU stayed perfect at the Outrigger Invitational in Honolulu, edging No. 8 Lewis in four sets, while back on the mainland, Stanford’s Jaylen Jasper had a breakout night, downing a career-high 27 kills as the No. 20 Cardinal bested UC San Diego in four. Lindenwood picked up a home sweep of No. 18 Saint Francis, while No. 13 Grand Canyon made quick work of Mount Olive to round up Friday’s early action.

Stat Leaders: Senior outside Brenden Sander and freshman opposite Gabi Garcia Fernandez notched 14 and 10 kills respectively to give the Cougars their second win at the Outrigger Invitational. Sander also turned in three aces, while Garcia Fernandez added seven digs, four blocks and an ace. Freshman opposite Felipe de Brito Ferreira had a stellar night with seven kills on a .778 hitting effort (7-0-9) to go with a match-high six blocks. Senior setter Leo Durkin added four blocks to go with his 35 assist tally.

It Was Over When: BYU grabbed a 6-2 lead to start Set 4 with help from three blocks by deBrito Ferreira and Durkin. The set was far from over, however, as Lewis charged back to tie it up at 7 and take a 10-9 lead of its own. Murray turned in a kill and a block and Coenen served up back-to-back aces in the stretch. The teams traded points over the next several serves, leading to an 18-all tie, the 11th of the set. The Cougars gained some separation with a 5-2 run, including two de Brito Ferreira putaways, to go up 23-20. The Flyers surged again with three straight as Moses notched a kill  and a block. A Sander kill gave BYU a match-point try at 24-23, but Moses again tied it up. In the end a hitting error and a Sander putaway sealed the 26-24 win and the match.

Key Stats: Stanford snapped a four-match losing skid with a .314 hitting effort and piling up 12 more kills (51-39) against the Tritons. UCSD hit just .196 for the match, while edging the Cardinal 9-8 in blocks. Both teams served up eight aces.

It Was Over When: Stanford scored four of the first five points in Set 4, but UCSD rallied to take a 12-9 lead behind two kills and a block by Syftestad and six Cardinal miscues. A kill, a block and an ace by Syftestad appeared to put the Tritons safely up 18-12, but the set was far from over. Trailing by six again at 21-15, Stanford began its comeback, scoring eight of the next nine to take a 23-22 lead, including four UCSD miscues and two kills and a block by Jasper. A stuff by Syftestad and Flowers tied it up at 23, but a Jasper putaway and Mason Tufuga ace capped the Stanford comeback and 25-23 win.

Key Stats: Lindenwood hit at a .338 clip and limited SFU to a .035 effort with help from nine blocks in a home sweep. The Lions hit .350 or better in the first two sets and rounded up the night with a .273 effort, committing just nine errors in the match, to 23 for the Red Flash. Lindenwood outblocked SFU 9-5 and bested the Red Flash in kills (32-26) and aces (4-3).

Stat Leaders: Sophomore opposite Charley Hlavin was the lone player in the match with double-digit kills, tallying 10 for the Lions, while hitting .368 and posting a match-high six digs. Sophomore middle Sam Schindler added seven putdowns and a match-high five blocks, while junior middle Connor Hipelius turned in six kills on an errorless night (6-0-9), hitting .667 with three stuffs.

Nine players got in on the offensive action for Saint Francis, with Senior outside Brandon Buck and senior libero Shaughn McDonald leading the way with five kills apiece. Buck also put up a team-high three blocks, but hit at just a .042 clip. Redshirt senior outside Stephen Braswell, junior libero Griffin Sangrey and junior middle Hayden Herc chipped in three terminations apiece. Braswell served up a match-high two aces. Only Buck and McDonald played in all three sets of the match.

It Was Over When: Saint Francis boasted an early 4-1 lead, but Lindenwood worked back to a tied at 5-all, the first of eight knotups. After a final tie at 12, the Lions pulled away with a 4-1 run, including two Red Flash errors and an ace by Ben Symonds. SFU was back within one at 19-18 as four different players notched kills, but it was nearly all Lindenwood after that as the Lions closed out the match on a 6-1 run. Michael Chard notched three kills and the Red Flash committed three errors down the stretch, including a match-clinching service error.

Stat Leaders: Sophomore middle Caleb Blazer and junior outside Will Schwob tallied eight kills apiece in a balanced offense attack for GCU. four other players turned in four or more kills with all but one hitting .300 or better. Blazer hitat a team-high .636 clip with just one error in 11 swings, while Schwab hit .385. Redshirt senior middle Ashton King (6), senior outside Cody Williams (5), redshirt senior outside Cullen Mosher (5) and freshman outside Trevor Weary (4) rounded out the offense. King and redshirt senior setter Puna Kaniho put up three blocks apiece, while senior outside Shalev Saada served up four aces, while struggling to find his offensive footing with just one kill.

Junior outside Brad Monaghan downed a match-high 12 kills and hit at a .450 clip for Mount Olive. Senior opposite Bret Rutledge (8) and senior opposite Robert Poole (6) followed. Poole served up the team’s lone ace, while adding a team-best four digs alongside Monaghan and senior libero Josh Donahue. Freshman middle Jerrell Rogers managed two blocks for the Trojans.