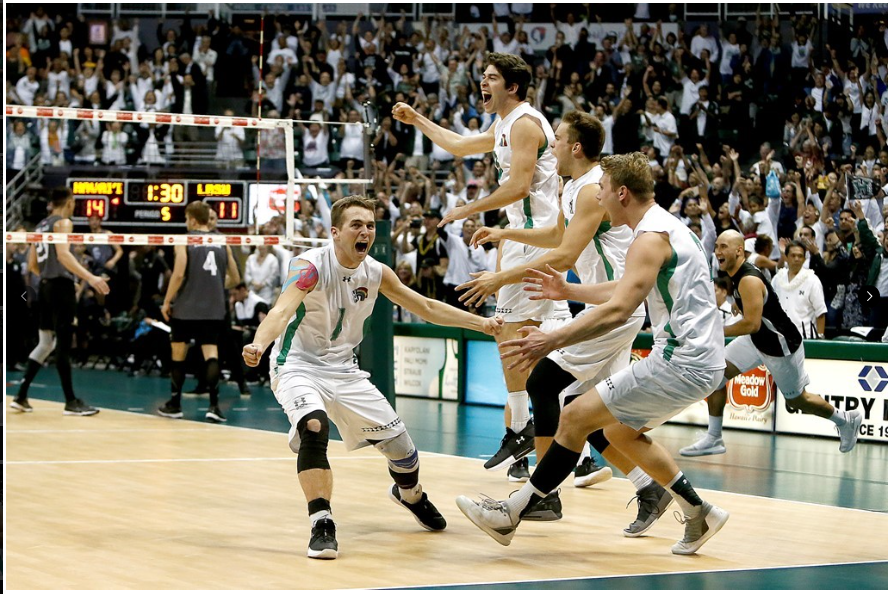 No. 1 Long Beach State’s bid to run the table on the 2018 season was cut short Saturday evening as... Current Photo via Hawaii Athletics

No. 1 Long Beach State’s bid to run the table on the 2018 season was cut short Saturday evening as No. 5 Hawaii pulled off the five-set upset. Junior opposite hitter Kyle Ensing registered his 1,000th kill in the match, but it was not enough as LBSU was outhit for the first time this season.

Junior outside TJ DeFalco did his part for the 49ers, turning in a match-high 25 kills, 10 digs and five blocks, while hitting .396 (25-6-48). Junior opposite Kyle Ensing followed with 14 putaways, including the 1000th of his career, as well as three blocks and two aces. Redshirt junior middle Nick Amado tallied nine kills on a team-best .600 clip (9-0-15) and put up a team-leading six blocks. Senior outside Bjarne Huus served up three aces to go with seven digs, six kills and three blocks.

It Was Over When: After tying the match at two sets apiece with an error-riddled LBSU effort in Set 4, Hawaii carried the momentum into the decisive fifth set, jumping ahead 6-3 thanks to a pair of van Tilburg putaways and two more 49er miscues. Long Beach State chipped away and tied it up at 10 with two Ensing kills and a kill and two blocks by DeFalco. After another knot-up at 11, Hawaii ran away with it on the back of three Parapunov kills and a Gage Worsley ace.

Key Stats: UC Irvine dominated at the net, racking up 11 blocks, while hitting at a .456 clip as a team, rebounding from Friday’s five-set loss to the Gauchos. The Anteaters hit at a .439 or better clip in all three sets, while holding UCSB under .250 save a .342 effort in Set 2. UCI boasted a 48-43 lead in kills and 11-1 advantage in blocks, while both teams served up two aces.

Stat Leaders: Sophomore middle Scott Stadick tallied 12 kills and seven blocks, while hitting at a team-best .625 clip for the Anteaters. Senior outside Aaron Koubi (11) and junior opposite Karl Apfelbach (10) also turned in double-digit kill tallies, while freshman outside Joel Schneidmiller (8) and redshirt freshman middle Austin Wilmot (6) rounded out the offense. Schneidmiller and Koubi each pulled up a team-high seven digs and served up an ace.

Sophomore outside Roy McFarland notched a match-high 13 kills and added seven digs for UCSB. Sophomore opposite Spencer Fredrick (9), sophomore opposite Keenan Sanders (8) and redshirt sophomore middle Brandon Hopper (7) followed. Hopper hit at a match-leading .778 clip (7-0-9) and was one of five Gaucho players with a block to his credit. Fredrick joined McFarland with a team-leading seven digs.

It Was Over When: UC Irvine led 5-2 early in Set 3 as Koubi downed two kills and Stadick turned in a kill and a block. UC Santa Barbara chipped away and scored eight of the next 11 to grab a 10-8 lead of its own, thanks in part to three McFarland putaways. A block by Schneidmiller and Wilmot capped a 3-0 run, which put UCI back on top 14-13. The Anteaters then scored four in a row, including two Gaucho errors to surge ahead 19-15. Three UC Irvine miscues and a Fredrick putaway narrowed the gap to three at 23-20. A Schneidmiller kill gave UCI set point at 24-20, but a Fredrick putdown kept the set going. Koubi ended the night with his 11th kill.

Key Stats: The Matadors hit .386 for the match and outblocked UC San Diego 10-4, holding the Tritons to a .151 hitting effort in the sweep. Northridge also boasted a 45-35 lead in kills, but UCSD won the serve (3-0 in aces). Cal State Northridge hit .300 or better in all three sets, including a match-high .480 in the clincher. The Tritons best hitting effort of the night was a .219 clip in Set 2.

Stat Leaders: Junior outside Dimitar Kalchev notched 15 kills and senior opposite Arvis Greene added 11 to pace the Matadors, while three other players turned in six putaways apiece. Junior middle Eric Chance, freshman outside Maciej Ptaszynski and senior middle Josiah Byers rounded out the offense. Byers hit at a team-best .750 clip and downed six blocks, while Chance posted a .455 effort and added four stuffs. Sam Porter also got in on the action, putting up five stuffs to go with 34 assists and seven digs.

It Was Over When: Cal State Northridge took control of Set 3 early scoring seven of the next eight after trailing 4-3. Byers notched two kills and a block and Greene added two putaways in the stretch, which put CSUN up 10-5. The Tritons would get no closer than three the rest of the way as the Matadors upped the margin to seen at 17-10 with help from two UCSD errors. Three Syftestad kills tried to pull the Tritons back into the game at 18-15, but Northridge held them at bay. Two Kalchev putaways and two Triton miscues made it 24-19. Thalken kept the match going with back to back kills, but Greene ended the night with his 11th.

Stat Leaders: Sophomore outside Sam Greenslade was the top hitter in the match with a career-high 21 kills and four aces, while hitting at a team-high .475 clip for George Mason. Junior outside Travis O’Gorman added 15 putaways, seven digs and three aces. Sophomore middle Brad Creamer and junior outside Aaron Cymbor chipped in seven kills each. Creamer also notched two solo stuffs.

It Was Over When: After trailing 4-2 in Set 4, George Mason scored eight of the next 10 to go up 10-6, with help from five Crimson miscues. Harvard would get no closer than three the rest of the way. Three kills each by O’Gorman and Greenslade put the Patriots up six at 20-14. The teams traded points over the next 10 serves to close out the night. Back to back kills by Greenslade and a service error put GMU on the hill at 24-18. Another service error ended the set and match at 25-19.

Key Stats: Penn State defeated NJIT in four sets, avenging Friday’s loss, despite being outhit .269 to .217 in the final stanza. For the match, the Nittany Lions outhit the Highlanders .295 to .270 and edged their foes 5-4 in aces. NJIT boasted a slim 7.5 to 5.5 lead in blocks and 45-44 advantage in kills, but committed 28 service errors to just 15 for PSU. The lead changed hands just four times in the four-set affair.

Sophomore opposite Piotr Namiotko (12), freshman opposite Alvaro Gimeno (10) and sophomore middle Luca Berger (10) posted double-digit kills to NJIT, but it was not enough. Berger hit at a team-best .562 clip and put up five blocks, while Namiotko tallied a team-high six digs. Gimeno and senior setter Cameron Tait chipped in three blocks apiece, while sophomore outside Bailey Mundy notched seven kills and two aces.

It Was Over When: The teams split the first 14 points of Set 4, but Penn State wasted no time after that, claiming a 15-9 lead with an 8-2 run. Four players notched kills, Mende served up an ace and the Nittany Lions had help from three NJIT service errors in the rally. The Highlanders cut the margin to five six times, but could not break through. A service error put PSU up seven at 21-14 and NJIT scored three of the next four, including two Nittany Lion hitting errors. A hitting miscue and service error gave Penn State its first set-point try at 24-18. A McLaren kill dealt the final blow two points later.

Key Stats: The Red Flash used a slight advantage in kills (57-55) and aces (8-6) to edge past Princeton in five sets, snapping a nine-match losing streak. For their part, the Tigers boasted a .368 to .248 lead in hitting efficiency and outblocked SFU 10-6. Princeton hit .467 or better in three sets, including a .526 effort in Set 1 and outhit Saint Francis .467 to .438 in the final stanza of the loss. After an up and down night at the net, the Red Flash hit a team-best .438 clip in the final set.

Stat Leaders: Redshirt senior outside Stephen Braswell and Senior outside Brandon Buck teamed up for 37 of the Red Flash’s 57 kills, turning in 19 and 18 respectively. Braswell also chipped in a team-high seven digs, two blocks and two aces, while hitting .447. Buck notched three aces and six digs. Senior middle Keith Kegerreis was back in action after missing Friday’s match and posted eight kills and three blocks, while hitting at a .538 clip.

It Was Over When: The teams tied nine times in Set 5, last at 10-all. Princeton took an early 5-3 lead as SFU committed three errors, and held an advantage until 10-9 thanks to three Huhmann kills. The Red Flash scored three straight on kills by Braswell and Kegerreis and a Buck ace, to grab a 12-10 lead of their own forcing Princeton to use both of its timeouts. The teams split the final six points, with a Kegerreis kill and Tiger service error marking the final two scores for Saint Francis in the 15-13 win.