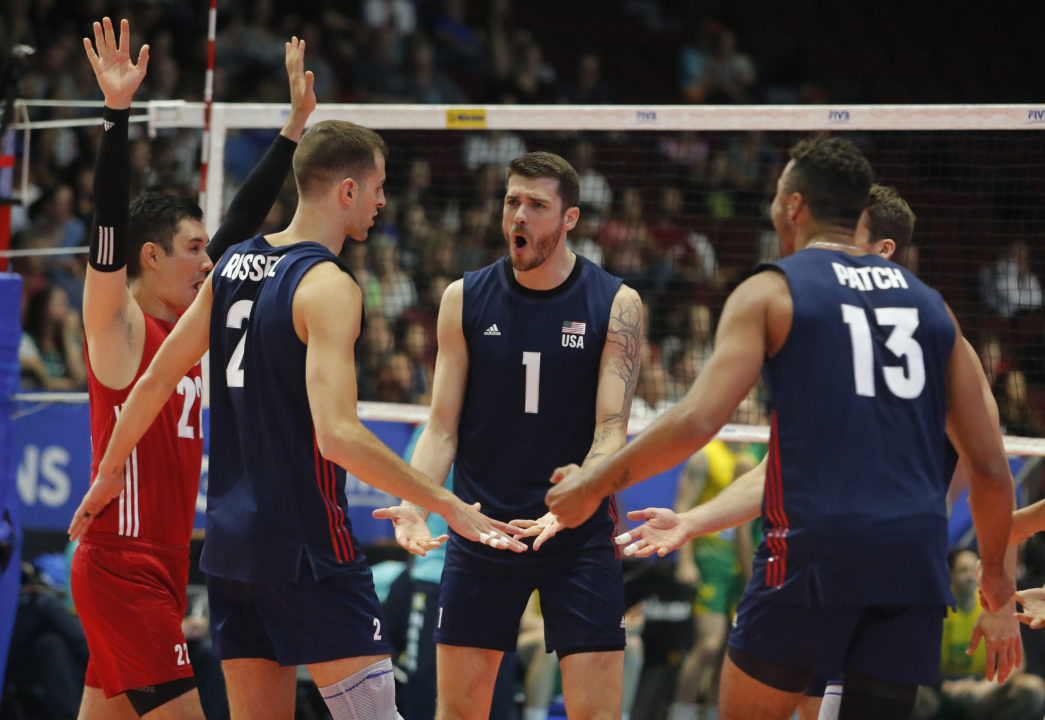 It wasn't perfect, with 29 miscues plaguing the team, but the United States bested Australia in every way in a four-set win to bounce back after two devastating losses.  Current Photo via FIVB

It wasn’t perfect, with 29 miscues plaguing the team, but the United States bested Australia in every way in a four-set win to bounce back after two devastating losses.

Everyone contributed in the match, with four double-digit scorers followed by Patch (8) and Christenson (4). Anderson led the way with a match-high 20 points on 15 kills, four aces and a block. Russell (17) and Jendryk (11) also chipped in double-digit kill tallies with 14 and 10 respectively. McDonnell added 11 points on eight putaways and three aces. Christenson put up a team-high three blocks, while Patch rounded out the offense with seven terminations.

Thomas Hodges paced Australia with 14 points, all on kills. Jordan Richards (9), Nehemiah Mote (8), Paul Sanderson (7) and Trent O’dea (6) rounded out the scoring. Richards was an offensive power with nine kills, while Sanderson and O’dea added six and five putaways respectively. Mote led the way in aces (3) and blocks (2).

Despite the lineup switch, Team USA was slow to start the match, falling behind 14-8 in Set 1 and dropping the set 25-20 as Hodges piled up 10 points in the Aussie win.

Trailing 13-11 in Set 2, Speraw called timeout and laid into his team and it appeared to do the trick. Mote served up an ace out of the break, but from there, the Americans turned it around, capturing the 25-20 win on an Aussie net violation.

Russell, Anderson and Jendryk starred over the final two sets as the United States cruised to 25-15 and 25-16 victories down the stretch to get back in the win column.

The Americans meant business in Set 4, jumping ahead 8-0 and never looking back.

The team’s resolve will be tested on Sunday as it faces NORCECA neighbors Canada in front of what is sure to be a packed house in Ottawa.