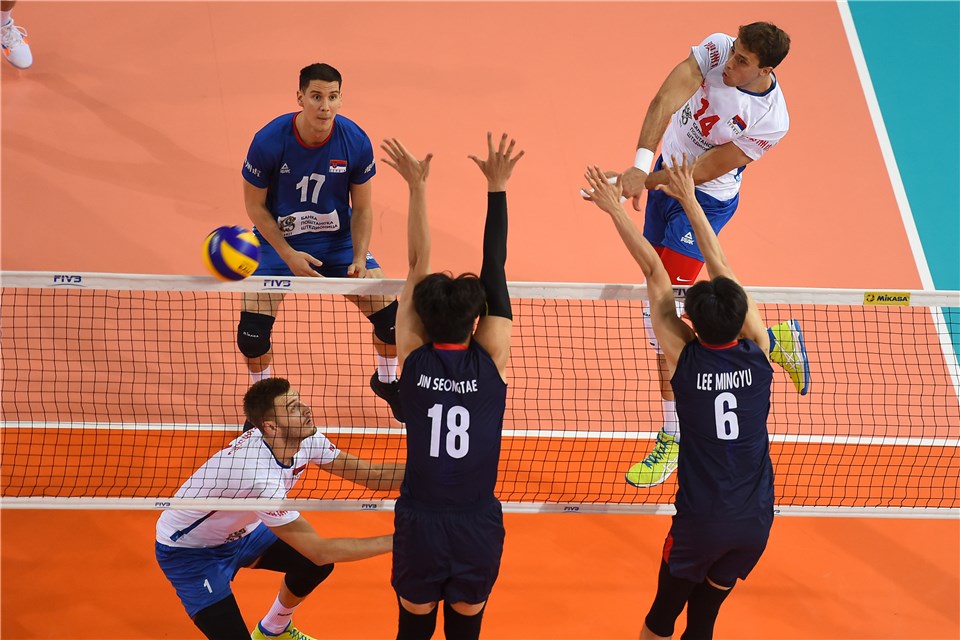 France pleased the home crowd for the second straight night, moving past Argentina in four sets as Stephen Boyer and Kevin Tillie starred. Serbia picked up its fifth-straight win with a sweep of South Korea as Aleksandar Atanasijevic racked up a team-leading 17 points.  Current Photo via FIVB

France pleased the home crowd for the second straight night, moving past Argentina in four sets as Stephen Boyer and Kevin Tillie starred.

Boyer downed 15 kills and added two blocks for a match-high 17 points, while Tillie racked up 11 points, all on kills, as each played in just the first three sets. Earvin Ngapeth accounted for 10 points in just two stanzas of work, with seven kills, two aces and a block. Julien Lynell led a group of eight other players who scored in the match. Lynell managed seven points (5 kills, 2 blocks) in the final two sets, while Antoine Brizard put up a team-leading three blocks after starting Sets 3 and 4. All but Trevor Clevenot played in the match for the French.

Argentina grabbed the first three points of the match, but France had rallied to lead by the same tally at 15-12 midway through as Boyer starred. The French pushed the margin to seven at 20-13 and cruised to a 25-18 win behind Conte.

A lineup change to start Set 3 did not work out as planned for French coach Laurent Tillie as errors piled up and the team found itself down 20-17 late. Poglajen extended the match for the Argentines, sealing a 25-23 victory.

Argentina carried the momentum to a 4-1 lead in Set 4, but the French turned the tables and built a 14-11 advantage of its own. It was close the rest of the way, until Boyer came through to end it 25-20.

Serbia picked up its fifth-straight VNL win with a sweep of South Korea on Saturday as Aleksandar Atanasijevic racked up a team-leading 17 points.

Atanasijevic downed a match-high 14 kills and chipped in two blocks and an ace for good measure. Nikola Mijailovic (12) and Milan Katic (10) were right behind. Mijailovic was the team’s top blocker with three stuffs to go with his nine kills, while Katic posted eight kills, a block and an ace. All six Serbian starters managed at least one ace, with five putting up two or more.

South Korea went up 8-6 early in the match, but could not hold off the Serbian charge. Atanasijevic and Mijailovic carried the load as Serbia claimed the 25-17 win.

Serbia scored five of the first seven points in Set 2, but Korea kept pace with help from Moon, pulling to within one at 14-13. In the end, the Koreans could not get out of their own way, falling 25-23 in an error-riddled set.