Serbia Clinches Spot in Round 3, Poland Takes Another Hit in Pool H 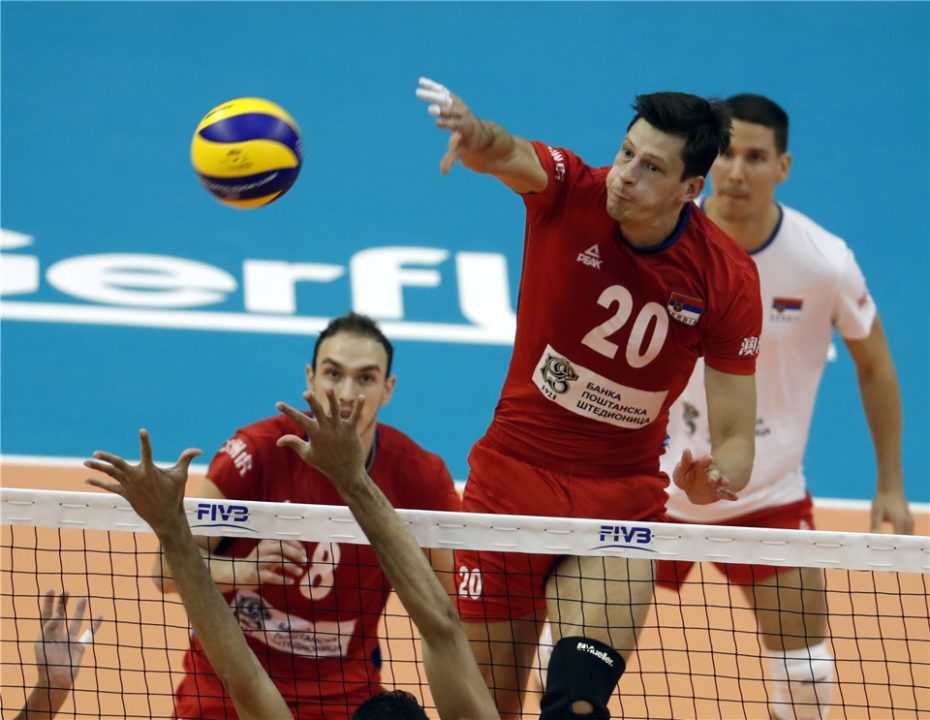 Srecko Lisinac and Serbia defeated Argentina to solidify their spot at the top of Pool H.  Current Photo via FIVB

Serbia finally ended Argentina’s last-ditch effort to qualify for the Third Round of the World Championships with a 3-0 sweep. That win has secured advancement for Serbia. Poland lost their second consecutive match, this time against France. Michal Kubiak saw limited action as he recovered from food poisoning. Both France and Poland are still eligible to qualify for the next round.

Earvin N’Gapeth showed why he can be one of the most dynamic players in the world of volleyball with his 26-point performance in a 3-1 win over Poland, the defending World Champions. N’Gapeth, the new signing with Zenit Kazan, put away a match-high 21 kills while hitting 53.8%. The outside hitter also contributed a block and a match-high 4 service aces. Kevin Tillie got the start for France today after coming off of the bench in their 3-2 defeat to Serbia on Friday. Tillie scored 13 points on 12 kills and 1 block.

Opposite Stephen Boyer contributed 16 points in the win. He registered 11 kills on 28 attempts (39.3%) and a match-high 5 blocks on the right side. Kevin Le Roux looked like he was back to his normal self with a 11-point performance on 8 kills, 2 blocks, and 1 service ace. Nicolas Le Goff was relatively quiet from the other middle blocker position with 0 kills and 3 points (2 blocks, 1 ace).  Ben Toniutti set France to a 46.5% hitting percentage for the night.

Artur Szalpuk led Poland again with 12 points on 8 kills, 3 blocks, and 1 service ace. Fabian Drzyzga got the most kills out of middle blocker, Jakub Kochanowski. The 21 year-old put away 10 kills to go with 1 block. Damian Schulz got the start at opposite and scored 6 points on 5 kills and a block before being replaced by Bartosz Kurek in the 3rd set. Kurek finished with 5 kills and 2 blocks.  Drzyzga set Poland to 37.3% attack efficiency.

Toniutti, captain of France knows that while this was a positive result, there is still a lot more to be done. “It was a good victory but still, it is not enough,” he said. “We have to come back tomorrow and to try to win this game against Argentina. Then we have to see what will happen in the game between Serbia and Poland. We will prepare really good for the battle tomorrow and we will support a lot Serbia.”

Serbian coach, Nikola Grbic, needed a result on Saturday to secure a spot in Round 3. So what does he do? He sits his star opposite who tied a World Championship record 38 points on Friday. With Aleksandar Atanasijevic getting a rest, Drazen Luburic shouldered the load to lead Serbia to victory. Luburic scored 14 points on a match-high 12 kills, 1 block, and 1 ace.

Marko Ivovic was the other player from Serbia to score in the double digits. The outside hitter played the whole match and scored 12 points on 10 kills and 2 blocks while hitting 47.6%. Srecko Lisinac contributed 8 points in the middle on 6 kills, 1 ace, and 1 block. Uros Kovacevic also produced 8 points from the outside on 8 kills and a 53.3% attack efficiency. Nikola Jovovic continued to display a pair of steady hands for Serbia, setting his team to a 52.4% success rate in attack.

Facundo Conte has yet to regain his form from his 33-point performance against Japan on the last day of Round 1. He only scored 7 points on 7 kills and was replaced by Bruno Lima (who scored 3 points) in the 2nd set. Lisandro Zanotti scored 10 points on 9 kills and an ace. Critsian Poglajen also chipped in 10 points on 9 kills and 1 block. Luciano De Cecco got the nod from Julio Velasco and set Argentina to a 42.7% hitting percentage.

Jovovic knows there is much to improve in Serbia‘s last match of Pool H against Poland on Sunday. “This game was really strange. Both teams made a lot of mistakes and we just were the team who made a little bit less mistakes,” admitted the Serbian setter. “We did not show great volleyball, but in the end it is a very important win for us.”