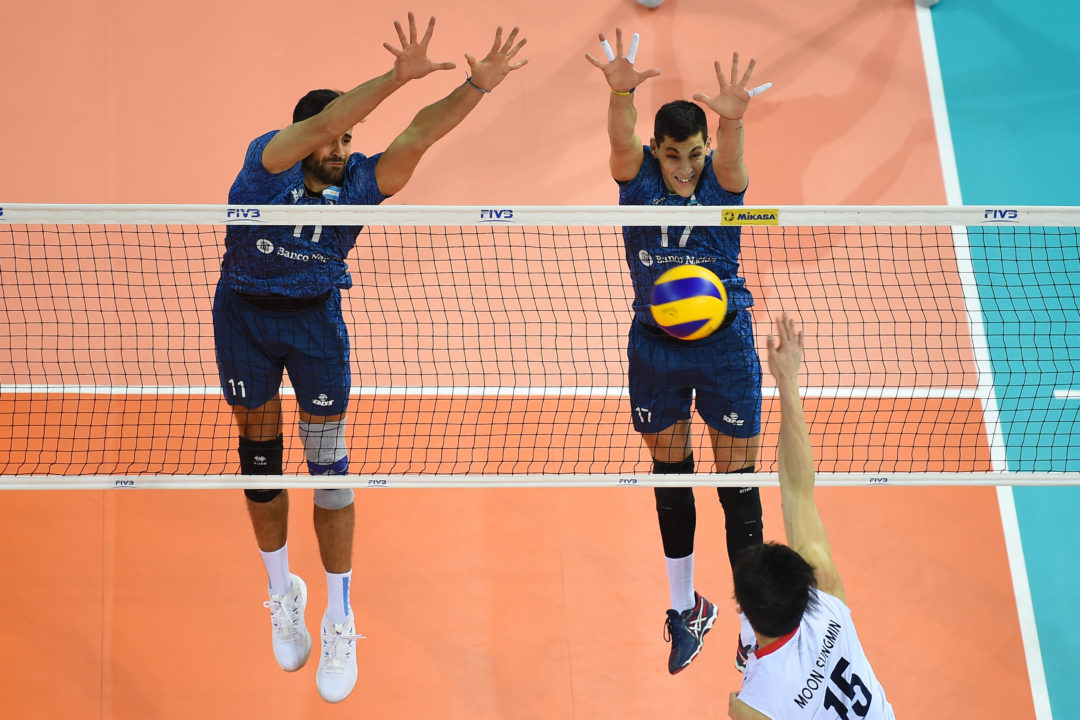 Twelve blocks, including five by Agustin Loser, were the difference as Argentina scored its second win of VNL play. France rode 14 blocks and eight aces to a sweep of Serbia on Sunday, cementing its spot in the VNL Top 3. Current Photo via FIVB

Twelve blocks, including five by Agustin Loser, were the difference as Argentina scored its second win of VNL play with a sweep of winless South Korea.

Argentina boasted a slight 46-45 lead in kills, but made hay with a 12-4 margin in blocks. The victors also had help from 17 Korean errors in the match. On the plus side for Korea, the team served up four aces and did not allow any, while limiting its errors to 15.

A balanced attack also was key for Argentina as four players scored in double digits, each notching seven or more putaways. Cristian Poglajen was tops with 13 points (12 kills, 1 block), while Sebastian Sole (11) and Tomas Lopez (11) added 10 putaways each. Agustin Loser rounded out the top group, adding seven kills to his five-block tally.

Argentina jumped out o a 6-3 lead in Set 1 and doubled their advantage to six at 14-8 with help from Korean miscues. Jung tried to pull Korea back into it, but Poglajen ended the set at 25-20.

The momentum stayed with the Argentines in Set 2 as the team scored seven of the first 10 points. It was just a one-point game, however, at 11-10. The teams were close the rest of the way, until a Korean error gifted Argentina the 25-23 win.

Korea never gave up, battling hard in Set 3, but in the end the team came up just short, falling 26-24 on a Bruno Lima putaway.

France rode 14 blocks and eight aces to a sweep of Serbia on Sunday, cementing its spot in the VNL Top 3 after three weeks of play after going 3-0 at home.

The French were a force at the net with a 14-2 lead in blocks and from the end line, piling up eight aces and allowing none. Also to their credit were 21 Serbian errors. France committed just 11 errors in the match, but trailed Serbia 46-38 in kills.

Stephen Boyer, Earvin Ngapeth and Thibault Rossard carried the load for the French with 17, 16 and 13 points respectively. Boyer downed a math-high 15 kills and added two blocks. Ngapeth followed with 10 putaways and Rossard added seven, while each managed a team-best three aces and three blocks. Nicolas Le Goff put up a team-high five blocks among his eight points.

Uros Kovacevic was part of a balanced attack for Serbia, leading the way with 11 points on 10 kills and a block. Marko Ivovic, Srecko Lisinac and Drazen Luburic were not far behind with at least seven points and six kills apiece. Ivovic and Lisinac turned in eight points each, all on kills, while Luburic notched seven points on six putaways and a block in just over two sets of action.

France scored four of the first five point of the night, but Serbia stayed within striking distance and the teams played to a 22-all tie. Boyer and Ngapeth came through in the end to lift the French to a 31-29 victory.

Rossard continued his strong play in Set 3, lifting the French to a 10-8 lead. Serbia could not contain France’s hitters and soon trailed 16-10. Ngapeth capped the match with his final kill at 25-15.