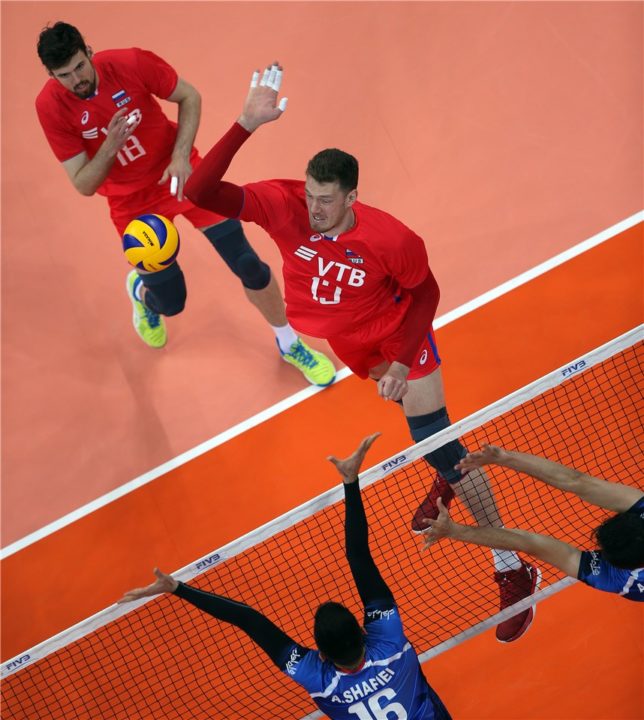 Brazil put down 21 more kills in the match, including 15 by Wallace DeSouza in a rout of China on Sunday to stay atop the VNL standings. Russia picked up its second straight home victory, besting Iran in every scoring category, while Dmitriy Muserskiy scored a match-high 24 points.  Current Photo via FIVB

Brazil put down 21 more kills in the match, including 15 by Wallace DeSouza in a rout of China on Sunday to stay atop the VNL standings.

Brazil pounded down 53 kills, while allowing just 32. The team also outdid its foes 4-2 in aces, both giving enough cushion to make up for a 7-4 deficit in blocks and 23 errors (to 16).

DeSouza was the star of the show, racking up a match-high 21 points, and accounting for all four of the team’s aces and a team-leading two blocks, despite acting only as a substitute in Set 3 after starting the previous two.

Mauricio Silva (9), Isac Santos (8), Douglas Souza (8), Mauricio Souza (6) and Alan Souza (6) rounded out the scoring, with all of those points coming on kills, save one block by Santos.

Chuan Jiang gave his all for the Chinese, notching 13 points on 12 kills and a block. Jingyin Zhang and Libin Liu followed with eight and seven points respectively. Liu scored on seven kills, while Zhang added six putaways, a block and an ace. Tianyi Mao and Ruantong Miao put up two blocks apiece to lead the net defense.

DeSouza was a factor throughout, piling up nine kills in the first set, seven in the second set (plus three aces).

DeSouza scored of Brazil’s first eight points as did Jiang for China. The Brazilians built a five point lead at 20-15 and carried that through to the finish at 25-20.

In Set 2, Brazil grabbed a 6-2 advantage behind Santos. China stayed close, pulling within one at 13-12. DeSouza served up three straight aces to give Brazil a 17-15 lead and the team cruised from there, winning 25-19.

China boasted the lead late in Set 3, but found a way, stealing away the 27-25 win and the match.

Brazil captain Bruno Rezende: “Today’s game was spectacular. In the third set we started to have issues because China stepped up on their defensive game, but despite their big lead we were still able to regroup and win. I have to admit that against such teams as Russia or USA, we have to play in a more coordinated way and be more focused, which is mentally straining. But that’s normal, that’s what the game requires from us. China is a strong team and we put our best effort against them.”

China captain Ji Daoshuai: “We didn’t give up all the way until the very end and played full force. We have improved and advanced further in our game. Of course, the result wasn’t very good, but we gave it our all and we’re going to continue going forward.”

Dmitriy Muserskiy was the top scorer in the match with 24 points, tallying 23 kills and an ace for Russia. Konstantin Bakun (15), Egor Kliuka (15) and Anton Karpukhov (13) also managed double-digit scoring efforts. Bakun downed 13 kills, while Kliuka followed with 10 to go with three blocks and two aces. Karpukhov added eight kills and two blocks, while boasting the team lead in aces (3). Ilia Vlasov was the team’s top blocker with four stuffs, despite playing in only Set 2.

Set 3 was another close affair with Russia earning a set-point try at 26-25 and Muserskiy sending a tip shot to the corner to give the home team the 2-1 edge in the match.

Iran stayed close in Set 4, but were unlucky in the end, falling victim to a serving run by Karpukhov and committing its own service error to end the night.