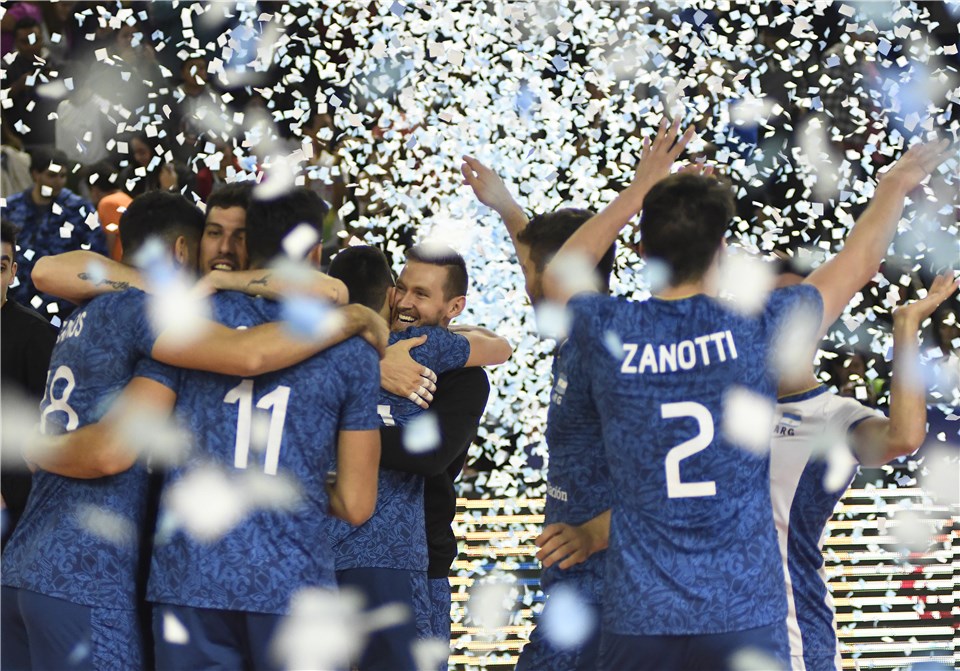 Ryan Sclater and Stephen Maar turned in double-digit point tallies to lift Canada to its third straight VNL victory, while the home crowd finally left happy as the Argentines bested Italy in every way in a surprise sweep on Sunday to close out a three-match homestand. Current Photo via FIVB

Sclater scored 18 and Maar added 13 to lead the Canadian charge. Sclater tallied a match-high 16 kills and added two blocks, while Maar chipped in 11 kills and two stuffs. Jason Derocco (8), Lucas Van Berkel (7) and Graham Vigrass (7) played key supporting roles. Derocco downed seven kills and served up one of the team’s two aces, while Van Berkel and Vigrass each tacked on six kills and a block.

After falling behind 9-2 in Set 3, Iran turned things around behind Morteza Sharifi and Farhad Ghaemi and forced a fourth set on a Ghafour putaway.

Canada held its breathe in Set 4 as Maar landed on Ghafour’s foot, but the star remained in the match. Sclater turned it on guided the team down the stretch to a 25-21 win.

The home crowd finally left happy as the Argentines bested Italy in every way in a surprise sweep on Sunday to close out the three-match homestand.

Facundo Conte and Tomas Lopez scored 12 points apiece to lead a balanced offensive attack for Argentina. Lopez downed 12 kills and Conte added 11 putaways and a block, while Sebastian Sole (10), Lisandro Zanotti (9) and Agustin Loser (9) followed. Zanotti tallied eight kills and a block despite playing in just the final two sets, while Sole and Loser chalked up seven kills apiece. Sole put up a team-high two blocks, while serving up one of the team’s four aces.

Ivan Zaytsev and Osmany Juantorena combined for 31 points for Italy, posting 16 and 15 respectively. Zaytsev notched 14 kills and Juantorena added 13, while each registered a block and an ace. Simone Anzani and Luigi Randazzo rounded out the scoring effort with seven and six points. Anzani put up a team-best two blocks.

After struggling to find itself in Set 1, Italy busted out to a 17-11 advantage in Set 2 and earned a set-point try. Argentina stopped them and the teams traded points leading to a 29-all score. In the end, Zanotti helped the Argentines steal away the 33-31 win.

Argentina carried the momentum into Set 3, jumping ahead 14-9. Italy pulled within one at 21-20, but a Juantorena miscue and a block by Martin Ramos gave the home side some breathing room. Zanotti closed out the match with the final two points to send the team and crowd into a frenzy of celebration and the confetti falling from the ceiling.

Argentina coach Julio Velasco: “San Juan is a very important city for volleyball and we are happy to win a match here. The fans deserved it. As for the game today, everything worked out as planned – every substitution was correct and we didn’t have service errors. This was important to break the five consecutive losses. Although the mood was never bad in the group, this victory gives us another energy for what is coming.”

Argentina player Lisandro Zanotti: “We were looking for this victory. We always kept working and luckily today we were able to show the game we have been training for. We played very well and we are happy for this result.”

Italy coach Gianlorenzo Blengini: “Argentina played very well and for us the second set was the key of the match. We had a lot of chances to close the set, but we weren’t able to do it. In the third set, we felt the situation and even when we tried to stay in the game, it wasn’t enough.”