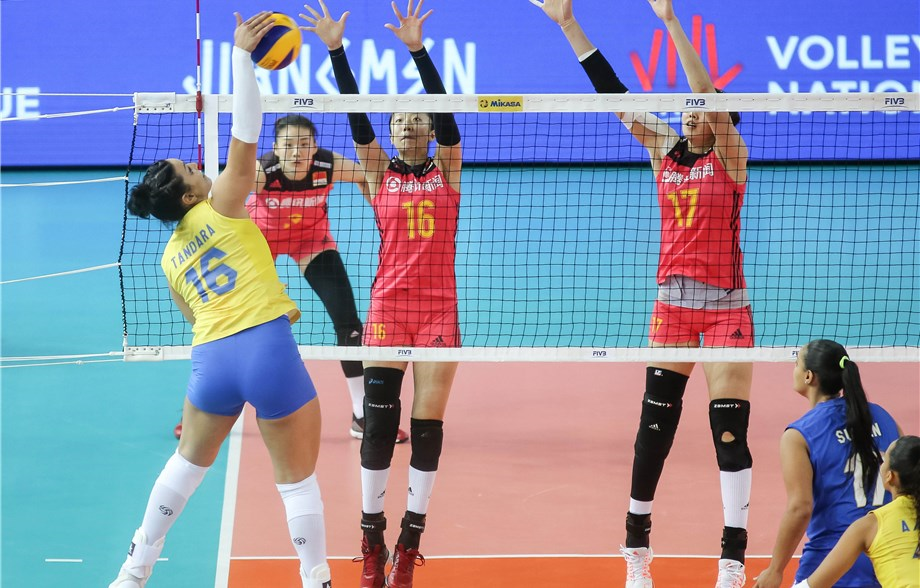 Zhu Ting tallied a match-high 34 points and China led Brazil in kills, blocks and aces, but it was not enough to secure a victory on Tuesday.  Current Photo via FIVB

Zhu Ting tallied a match-high 34 points and China led Brazil in kills, blocks and aces, but it was not enough to secure a victory on Tuesday.

Tandara Caixeta led a balanced attack for Brazil with 19 points on 18 kills and a block. Adenizia Da Silva (14), Amanda Francisco (13) and Drussyla Costa (11) also aided the team’s efforts. Francisco and Costa posted 11 kills each, while Da Silva put up a team-best seven blocks to go with six kills.

Ting did it all for China, racking up 27 kills, five blocks and two aces. Yuan Xinyue added 16 points on 13 kills and three blocks in her first efforts since Week 1. Li Yinying (12) and Yan Ni (11) also turned in double-digit efforts. Ni downed eight kills and added two blocks and an ace. Yingying chipped in six kills, three blocks and three aces.

The final point of the match was decided on a challenge by Brazilian coach Jose Roberto Guimaraes, and after review, a touch was called and Brazil claimed the 16-14 win.

After dropping the opening set, Brazil rallied to take Set 2. In set 3, a close call on a fingernail touch was enough to thwart a Chinese set-point try and lift the team on to a 27-25 win. Fueled by two near misses, China crushed the Brazilians behind Ting sending the match to a decisive fifth set.