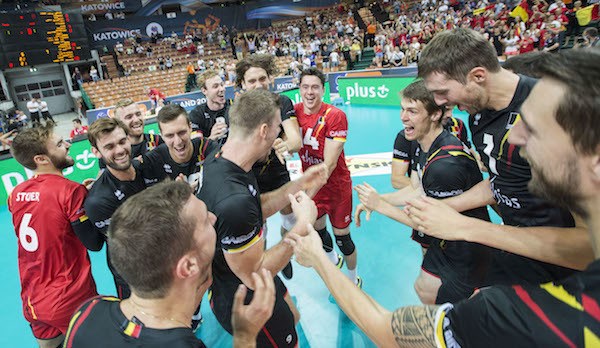 After two days of play, Germany sits atop Pool B at 2-0, while Belgium is undefeated in Pool D. Current Photo via CEV

Italy and Germany made quick work of their foes in Pool B, while Belgium and Turkey won five-set nailbiters in Pool D. After two days of play, Germany sits atop Pool B at 2-0, while Belgium is undefeated in Pool D.

The Italians dominated every facet of the match, while showing extreme efficiency offensively.

Filippo Lanza and Luca Vettori carried the load for the Italians, scoring 15 and 13 points respectively. Each tallied 10 kills, while Lanza added a team-best four aces and Vettori chipped in two perfect serves.

Italy scored the first six points of the match and cruised to a 25-14 win, ending the stanza after a highlight reel save by Vettori on the penultimate point.

The second set saw Slovakia lead 14-13 midway through, but the squad could not hold on as Lanza starred and Oleg Antonov issued the final nail at 25-19 for the Italians.

The teams were knotted at 14-all in Set 3, before Italy ran away with it, clinching the win on a Antonov ace.

“There are no better or worse teams,” Italy’s Luca Spirito said. “This is the European Championship and every team came here to win. We have to keep our concentration during this tournament and play every match on a high level.”

The Czechs won the block but were done in by a superior offensive effort by the German side in a 3-0 loss on Sunday.

Germany managed 44 kills and hit at a 48 percent efficiency, while allowing just 24 kills and a 31 percent effort. Seven aces (to 3) also aided the German charge. The Czechs won the block (9-8).

“The serving and the blocking of the Germans were crucial for this match,” Czech Republic’s Michal Finger said. “They played better in defence as well. In the third set we were able to make some good serves and block and in the meanwhile they lost some points due to several outs. That is why the result was much closer than in the previous sets.”

Gyorgy Grozer paved the way as per usual, tallying 19 points on 17 kills, a block and an ace. Grozer was the lone German to score in double figures. Christian Fromm and Tobias Krick were next on the squad with nine points apiece. Krick put up at team-leading four blocks, while From turned in eight kills and a stuff.

The Germans jumped ahead 8-4 in Set 1 and took advantage of six Czech miscues in a 25-19 win. The Czechs did pull level at 11, but could not compete with a seven-point effort by Grozer.

Germany made quick work of its foes in Set 2, seizing an 8-1 advantage and never relinquishing it with help from five blocks and four aces in a 25-14 effort.

Germany put down 17 kills in the final 25-20 victory. Lukas Kampa scored the final point in the win.

Belgium won its second straight five-set match on Sunday to top Pool D with a close win over Turkey. The teams actually tied in points at 113 apiece.

“We played a great game today, despite the loss.,” Turkish coach Josko Milenkoski said. “We had two match points in both 4th and the 5th set, but I think we did lose a bit of rhythm when Gökhan Gökgöz sustained injury. Perhaps we need to play with keeping our emotions more in control, which is difficult when the game slips away form your hands. I am a bit disappointed with that result, as we were close to both victory and getting three points here. I think we will be going to the playoffs, but it is now a matter of waiting to see if we secure it today when France win or whether we will have to confirm our spot tomorrow against them ourselves. ”

Metin Toy scored a match-high 31 points, including 26 kills and four blocks, but could not lift his side to victory. Toy had help from double-digit efforts from Gokhan Gokgoz (18), Faik Samed Gunes (18) , Burutay Subasi (14) and Mert Matic (10). Gunes put up a team-best five blocks.

In the tiebreak, Belgium boasted an 8-7 lead at the changeover. Turkey charged back to go up 12-11 and had a match-point chance, but could not close it out. Belgium got a block from Verhees and Francois Lecat, one of six in the set, to earn a match-point try of its own at 15-14. A Turkish hitting attempt sailed long to finally give the Belgians the 18-16 victory.

“It was a very interesting match,” Rousseaux said. “It was difficult for us to play the same level as we played with France. Maybe we were a little bit too stressed as it was a very important game for us today. It wasn’t our most beautiful volleyball today, but we were able to win and we are happy because of that.”

The teams played to a 21-all tie in Set 1, but a Rousseaux kill clinched the Belgian a 25-22 win. Turkey had seven errors in the set, while Belgium managed three blocks and an ace.

Turkey carried the momentum through intermission and jumped ahead 17-13 in Set 3. Belgium  scored six in a row to steal away a 19-17 edge, but in the end Toy was too much as Turkey won 25-21.

The Belgians regained form in Set 4, overcoming an early 8-4 deficit with help from a 59 percent hitting efficiency and six Turkish errors. Gokgoz went down with an injury shortly after the first technical time out, rattling Turkey and opening the door for a Belgian rally and eventually a 27-25 victory.

Stephen Boyer led a group of four French players with double-digit point tallies as his team edged the Netherlands in five sets, and by a point total of 114-112.

The teams were knotted a three early on in Set 5, but Rossard served up two aces to give the French a 6-4 edge. France pushed ahead three at 10-7 and held the Netherlands at bay for the 15-12 win.  The victors scored nine points on kills, two with aces and three on Dutch errors in the final stanza.

France scored the first four points of the night and pushed the lead to six at 15-9 midway through en route to a 25-22 win.

The French led 8-4 in Set 2, but the Dutch knotted the score at 11 and carried the momentum to a 25-23 victory. Twenty of the team’s points came via kill as it hit at a 61 percent efficiency.

The Netherlands boasted an 8-6 edge at the first timeout of Set 3, but it was not able to hold off a French charge, which brought the score to a 15-all tie soon after. In the end though, the Netherlands were lifted to a 25-21 win with help from six blocks and 10 French errors.

Down 8-6, France scored five straight to vault ahead 11-8 with help from Earvin Ngapeth. The Dutch grabbed a 22-21 lead, prompting a French timeout. Rossard guided the team to a 30-28 win and the tiebreak.