Serbia, Russia Move to Top of Groups A, C with Very Different Results 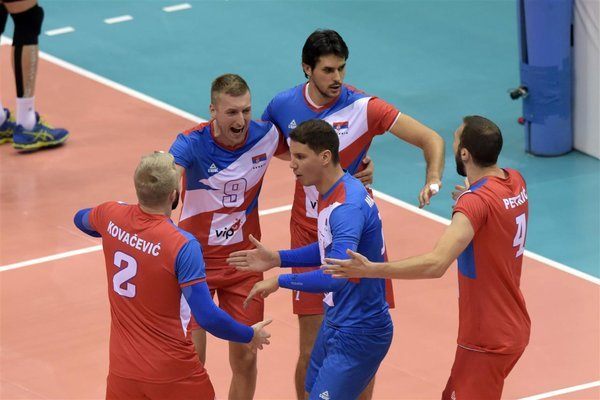 Serbia picked up its second win of the competition, edging Estonia in five sets and all but ensuring itself the top spot in Pool A with a 2-0 mark, while Russia seized control of Pool C at 2-0 with a sweep of Slovenia. Current Photo via CEV

Serbia picked up its second win of the competition, edging Estonia in five sets and all but ensuring itself the top spot in Pool A with a 2-0 mark, while Russia seized control of Pool C at 2-0 with a sweep of Slovenia.

Serbia still has Finland (1-1) to play in the group stage, while the last place Spain (0-2) stands in the way of the Russians quest for a perfect 3-0 mark in pool action.

In a match decided by just three points, there were no late rallies to steal away victories as the team which lead at the final timeout in each set went on to win.

“Estonia had nothing to lose in this game,” Serbia’s Srecko Lisinac said. “With thousands of their fans in the stands they played their best Volleyball. We can’t see any opponent as a weaker team, especially when they have such great supporters, so this game reminded us that focus is what matters nearly as much as Volleyball.”

The first set saw Serbia seize a 21-19 lead after trailing 16-15 at the second timeout, but the other four sets went the way of the early leader.

Serbia played from behind in Set3, never gaining its footing in the 25-21 loss. In the fourth, the Serbians returned to form, holding the Estonians at bay throughout in a 25-20 victory to force the tiebreak.

The teams split the first eight points of the decisive fifth set, but Serbia pulled away and held on for the five on its third match-point try.

In the tiebreak, however, it was the Serbian offense the made the difference as the side managed 11 kills, while hitting at a match-high 69 percent clip. The team also registered three blocks and an ace in the final 15-12 stanza.

For Estonia, Robert Taht scored a match-high 19 points, downing 14 kills to go with his four blocks and an ace. Renee Teppan (17), Andrus Raadik (14) and Ardo Kreek (13)  followed. Teppan put away a match-leading 17 kills, while Ardo accounted for a match-best six blocks.

“We still have to improve the quality of our technical and tactical skills,” Estonia coach Gheorghe Cretu said. “We are facing the best teams here and even if we played our best game against Finland, we fought like crazy here with Serbia. It can happen that some elements are not working, but we still have to believe that we can change these things as the match goes on. Today from the first moment my players were ready mentally and knew they can beat Serbia. I think they showed that no matter what the score is, they will fight back. Even when it was 14-9 in the tie break we were still believing that we are able to catch up with Serbia. It is incredible to have people with this attitude around me. They already made history here. Everyone will remember the tough Estonians here in Poland.”

Thirteen aces helped lift Poland to a sweep of Finland on Saturday. The Polish side also had help from a 42-27 advantage in kills and a 54 percent kill efficiency in the win.

Bartosz Kurek scored a match-high 15 points for Poland, including a team-best four aces, nine kills and two blocks. Michal Kubiak added 12 points, with 20 kills, a block and an ace.

Olli-Pekka Ojansivu and Elviss Krastins were the top scorers for Finland, turning in nine and eight points respectively. Ojansivu managed eight kills and an ace, while Krastins added five kills, two blocks and an ace.

The Finnish jumped out to the early lead in Set 1, going up 8-4 at the first break and maintaining the four-point edge at the second (16-12). The tables turned over the last segment of the stanza as Poland scored nine of the next 13 to vault ahead 21-20 en route to the 25-23 win.

The Polish side held the lead at each timeout in the latter two stanzas. Poland built a 12-7 lead in set 2 only to see Sauli Sinkkonen bring the Finnish back to a 19-all tie . A service error clinched the set at 25-21.

In a match decided by just seven points, including two extra-point sets, it was a handful of blocks and aces that made all the difference.

The Russians outblocked Slovenia 12-7 and served up two more aces (6-4) to account for the point differential. Russia committed just 20 errors, while benefitting from 24 by its Slovenian foes.  That was cancelled out by Slovenia’s 44-40 lead in kills.

Maxim Mikhailov led all scorers with 15 points, including 12 kills, two aces and a block. Dmitrii Volkov (12) and Artem Volvich (10) also scored in double digits for the Russians. Volvich put up a match-leading four blocks, while Volkov managed nine kills, two blocks and an ace.

A trio of players scored in double figures for Slovenia led by Toncek Stern‘s 14-point effort. Alen Sket (13) and Tine Urnaut (10) followed. Stern put down 13 kills, while Sket chipped in 12 and Urnaut nine.

The score stood at 21-20 Slovenia at the third timeout of each set, but, each time, the Russians stole them away.

“I’m satisfied with how we played, because we led twice 24-22,” Slovenian coach Slobodan Kovac said. “We did everything right but I think that in those hot moments of the game we just didn’t play with the heart. I felt that my players didn’t believe in this victory, which eventually made the difference.”

In Set 1, Russia trailed 24-22, but scored three straight to earn a set-point chance of its own. The Russians ended the stanza on Maksim Zhigalov ace three points later.

Russia boasted a three-point lead for much of Set 3, but Slovenia fought back to tie the score at 17. The rally was all for naught as Russia came through for the 25-22 win.

“This game was extremely important,” Russian coach Sergey Shlyapnikov said. “My team in the final part of every set played on a high level and showed its strength and character. We were capable of concentrating and playing well in the right moment. Everything seems so easy but today our opponent made it very hard for us. We don’t underestimate the Spaniards we will face on Monday. Everyone comes to the European Championship to fight for a win.”

Bulgaria led nearly the whole match, save late in Set 2, and had help from 15 blocks in a sweep of Spain on Saturday.

“I’m satisfied with how my team played today,” Bulgarian coach Plamen Konstantinov said. “I think they showed two faces; the good one until the half of the second set; then, like usually happens when everything is going pretty well, there came a moment in which my players thought that it was over. We needed to push until the end to win this second set but I’m happy that we didn’t let them come back, for Spain had nothing to lose and they are not a bad team.”

The Bulgarians cruised to the 25-15 Set 1 victory, downing 14 kills and racking up eight blocks en route to the win.

In Set 2, Bulgaria jumped ahead 8-2 early, let the deficit shrink to two at 11-9 and then rebounded to boast a 16-13 edge at the second timeout, but Spain rallied with eight of the next 11 points to surge ahead 21-19. Spain had three chances at the set at 24-21, but the Bulgarians, which committed nine errors in the stanza, recovered to take the set in extra points, 28-26.

The final stanza was a bit closer, with the Bulgarian lead standing at just one during the first and second timeouts. By the third break, the victors had stretched the lead to four at 21-17 and hung on to win by that margin. The difference in the set came as Bulgaria downed 15 kills to just 10 for the Spaniards.

“Bulgaria’s players blocked and served very well in the first set,” Spanish captain Jorge Valcarcel said. “For us it was difficult. In the second set the level of our play went up. We had four or five set balls. I think we needed more experience to win this part of the match. After losing the second set, we couldn’t rise again.”