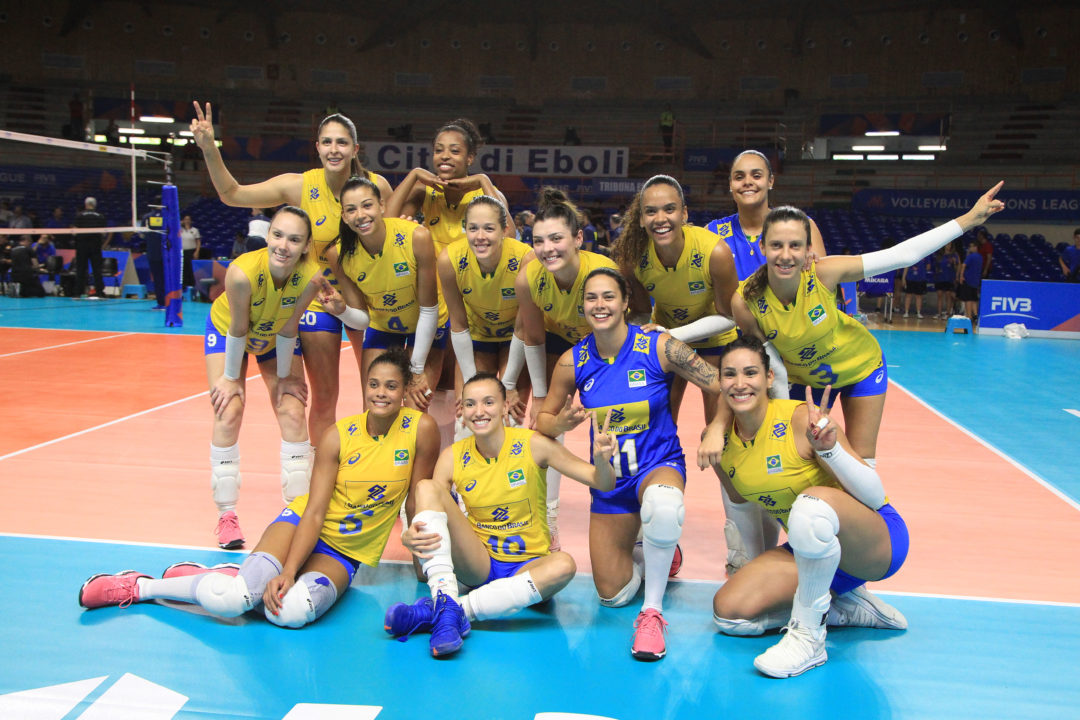 Brazil finished its VNL preliminary phase in its usual dominant ways, sporting a 12-3 record good enough for third place. However, it didn’t come without harm, as the team lost one of its main back-ups to injury, outside hitter Drussyla Costa. She will be replaced by Jaqueline Endres, who debuted on the competition as a libero but is now ready to return to the outside (CBV.com):

“Jaqueline participated as a libero during VNL’s Week 1 games. She then stayed in Brazil practicing with our reserve squad, both as a libero and as an outside hitter, in case of any emergencies. Now, she was called on to help us in this final phase. As she had been practicing in both positions, and is playing shape, she’ll be able to assist us when it matters most.” – Coach José Roberto Guimarães

Brazil’s players have stood out in VNL’s stat leader-boards. Opposite Tandara was the competition’s preliminary phase 4th highest scorer and 5th most efficient hitter at a 43.8% clip. Middle blockers Adenizia and Beatriz were the 2nd and 3rd best blockers, stuffing 0.8 and 0.77 balls per set, respectively. Meanwhile, setter Roberta and libero Suelen were the third best at their respective categories.

Indeed, Brazil will need everyone of its players to be at their best, as it will next face China and Netherlands next. Luckily for the team, Nanjing only brings good memories to its stars, as Brazil won the 2017 Grand Prix in the city (globo.com):

“We have very good memories from this arena for the story we built on it last year. We won a Grand Prix title here, and this brings happiness to our team. This factor strengthens our group. I hope this continues to be a winning place for Brazil.” – Tandara