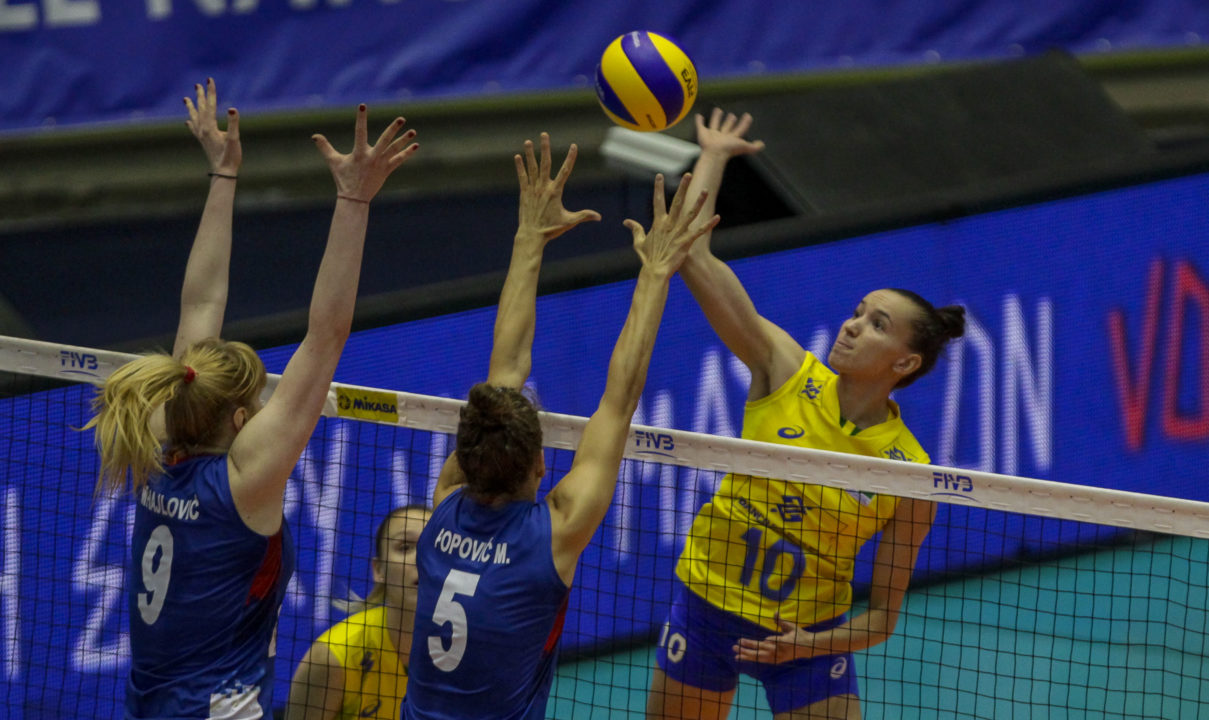 Brazil once again showed no one should ever bet against it - Meanwhile, Japan was able to get out of Week 1 with a win  Current Photo via FIVB

Brazil once again showed no one should ever bet against it. Meanwhile, Japan was able to get out of Week 1 with a win.

As Forrest Gump once said, Brazil’s female national team is like a box of chocolates, you never know what you’re going to get. After two very lackluster performances on the opening 2 games of the tournament, including an ugly defeat to the modest German squad, Brazil was able to overcome a 0-1 start of the game against powerful Serbia to come out with a 3-1 win (23-25 25-22 25-14 25-21) against one of the title favorites.

Ana Correa was perfect today, as she hit 9/11 from the field and added 8 blocks, with was arguably her best performance ever with the Brazilian jersey. Her teammate at the middle Adenizia Silva also contributed with 6 blocks, driving a stingy defense that allowed Serbia’s powerful due of Tijana Boskovic and Brankica Mihajlovic to a putrid 8/36 (22%) collective hitting performance. Brazil was able to come out with the win at the end even though it committed 31 errors to Serbia’s 18. It now has beaten Serbia in 12 of their last 14 encounters.

Brazilian coach José Roberto Guimarães was very pleased with the way his team changed attitude from the first day of play (Globo.com):

“I think the team has shown growth. It showed that it was ready for the game. I was very happy with the victory. We were able to overcome a bad start to the competition. Everyone was very frustrated after losing out first game at home. We played very badly, it was a hard time fors us. Against Japan, everything changed. Today, we already knew that it would be a complicated match. It was cool to be there as a coach and see the girls’ energy. When we look back and see the growth of the team, it’s great. These difficult moments, we must pass. We will go through difficult times, and growth will also come with everything that will happen.

Going through those moments at home also shapes the group. It makes the group get to know each other better, focus on the Championship. Playing at home is always a concern. I know we’re going through a very complicated time. But I know that this will strengthen the group. It is important strengthen yourself at home. With each game we play, we are feeling an evolution as a whole in the defensive system, in the block-defense relationship, in the positioning in the back of the court. The service itself has improved, but we can still grow, we can be more aggressive. We know we are missing some things. I enjoyed seeing certain things today in the game.

Playing against the best in the world is the best you can have as a team. We know it’s going to be difficult, we’re going to have to work hard. But this is learning. We need it.”

Having its first two games of the tournament against Brazil and Serbia sure is bad luck, so its natural that Japan was very desperate to finish its first round of play with a win. At the other side of the court, it had to face a German team that had not suffered consecutive defeats at a world level major tournaments in two years. But streaks are meant to be broken, and Japan was able to come out on top after a very contested 3-1  (25-21 25-23 21-25 25-17) match-up.

Sarina Koga led the way for Japan with 25 points. Louisa Lippmann had 22 points in the losing effort. Japan’s stingy defensive play made sure Germany’s powerful offensive duo of Lippmann and Maren Fromm only hit for a collective 27/86 (31%) effort.