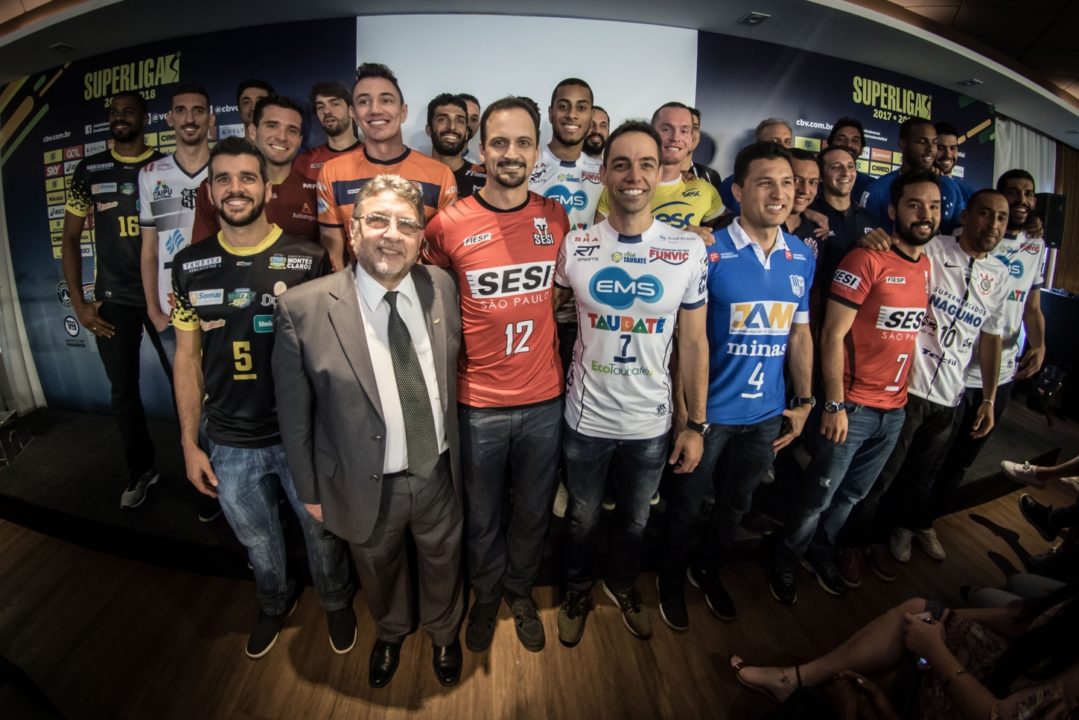 This year's Superliga will be one of the deepest domestic leagues in the world. Current Photo via CBV

Brazil’s most important domestic volleyball competition starts today. Superliga is brimming with talent, hosting most of Brazil’s national teamers and gold medalists. Can anyone stop three times FIVB Club World Championships winners and five time Superliga champions Sada Cruzeiro this time around? Today, we rank all Superliga teams and aware our readers on what players to watch out for this season.

Castro was relegated in last season’s superliga after finishing it in last place. It then missed its chance at a Superliga A promotion after it lost the 2017 Gold Cup to Corinthians/Guarulho. However, after Bento Vôlei withdrew from Superliga due to financial reasons, Castro was invited back into Brazil’s premier volleyball division. Needless to say, this is a second division tier team playing against first division competition. Its roster is full of very young, inexperienced players and it would be a big surprise if they don’t get relegated again this year. 6’10” Outside hitter Leonardo Pinheiro will have to play his heart out for the team to have any chance otherwise.

Canoas finished last season’s superliga in eighth place, good enough for a playoff spot. However, things will be different this season, as the team cut its budget by 60%. It also had a brutal transfer window, losing eight of its players and coach Marcelo Fronckoviak, which ultimately means that this will be a very hard season for Canoas’s fans. 25 year old, giant 7’1.5″ outside hitter Leandro Silva will have to carry most of the team’s offensive load.

Juiz de Fora Vôlei acts pretty much like Sada Cruzeiro‘s farm team, with all of its roster being comprised of Cruzeiro’s youth players. It finished 7th in last season’s Superliga, which was a big surprise. They lost four players in the transfer season, national teamer and last Superliga’s second highest scorer Renan Buaitti being the most important of them. The team will miss him a lot, and without a high scoring player like him in the roster, Juiz de Fora will have a hard time repeating last year’s surprising performance. The team’s hopes will rest o the shoulders of Venezuelan national teamer Emerson Rodriguez, a 25 year old hard hitting outside hitter.

Last season’s 10th place finish Maringá added some important pieces to its roster in this transfer season, including middle blocker Ialisson Amorin, who made last Superliga’s dream team. It should be enough for them to battle for one of the last playoff spots. Legendary setter Ricardo Garcia, also owner and general manager of the team, will lead the squad as always, although we can’t expect much from his tired 41 year old frame. The team also brought back from Europe former national teamer Thiago Alves, who at only 31 years of age, should still be able to offer some highlights to Maringá’s fans, the highest attendance club in the last few Superligas by a large margin.

Minas finished last Superliga in a comfortable sixth place. However, the transfer season saw it lose eight players. It only signed two new players to fill these voids, as the other spots will be filled by players in the team’s farm system. Forme national teamer setter Marlon Yared, who spent the last three seasons with Russia’s Dinamo Krasnodar, will be running the offense. At 40 years old, though, he won’t be able to win by himself, which means Minas will have to fight mightily to finish in a comfortable playoff spot this time around.

Montes Claros’s saw its roster be fleeced after last Superliga’s 5th place finish. In all, 11 players left the team. It did, however, bring in 11 experienced players to fill the voided spots, which means the squad will have a different look from last year’s roster, which was full of youngsters. One of the most important new hires is setter Sandro Carvalho, who at 37 years old stills play at a very high level. Also, Fabrício Dias (Lorena) is back, and this fact enough will have fans very excited, as he became a city idol after leading Montes Claros to a very improbable second place finish at the 2009/2010 Superliga.

Campinas lost two national teamers from last season’s team that finished Superliga in 4th place, Mauricio Souza and Thiago Brendle. In return, they signed 7’0″ outside hitter and former national teamer Leandro Vissoto and a few more experienced hands. The fact that they also boast one of the competition’s best coaches, Argentinian Horácio Dileo, means they’ll have no trouble securing a playoff spot.

Corinthians will debut in this year’s Superliga after being promoted through the Gold Cup. After its surprising run to the São Paulo State Championship finals, where they lost to Taubaté, the team will try to continue with its grit and grind style of play into the Superliga. The squad is full of known and experienced players, and will be led by superstar libero Sérgio Santos. The fact that Corinthians’s soccer club boasts 30 million supporters should mean that the brand new squad’s home games should be a sight to behold.

Sesc will debut at this year’s Superliga after being promoted last season. Instead of following a conservatie approach in its debut season, the team went all out and shelled out a lot of cash to sign five brazilian national teamers into its squad, including starters Mauricio Borges, Mauricio Souza, and Thiago Brendle, who led Brazil to a title in this year’s FIVB Grand Champions Cup. However, coach Giovane Gávio, albeit a winner at every level of play he has played or coached in, has been out of Superliga for a while now, and we wonder how well he’ll lead his star studded team after all this time away from the nation’s biggest volleyball competition.

In what could only be described as unusual transfer window, Sesi lost six of its players to newly formed city rivals Corinthians. National teamer setter Bruno Rezende also left the team for Italy’s Modena. To fill these voids, Sesi signed Bruninho‘s back up at the national team, former Sada Cruzeiro‘s William Arjona, to a millionaire contract. It also brought back to Brazil, from Turkey’s Halkbank, another 2016 gold medalist, Luiz Fonteles. Also, Murilo Endres, London’s Games MVP, will make the switch from the opposite hitter position to libero. However, the biggest question coming in Sesi’s season is how well coach Rubinho will lead the team after being out of a head coach position for the last four years.

Taubaté came out swinging in the offseason in order to try to finally challenge Sada Cruzeiro‘s Superliga crown. For starters, it extended the contracts of national teamers Ricardo Lucarelli, Wallace Souza, Otavio Pinto, Thales Hoss and Raphael Olivera. In addition, in perhaps the transfer window’s most surprising move, it also signed Serbian Marko Ivovíc, 2016 FIVB Worl League’s MVP to a contract, a much better opposite hitter than recently departed Lucas Loh. Former national teamer and Olympic gold medalist Dante Amaral was also signed to a contract and will offer additional veteran leadership to the squad.

The moves already started to show results, as Taubaté won the São Paulo State Championships for the fourth time in a row in the start of the 2017-2018 season.

Brazil’s most dominant club in history, Sada Cruzeiro doesn’t look like it is going away any time soon. It has already won three tournaments this season, and will be looking to add a fourth in the Superliga. Its transfer season saw some relevant changes in the team, with the departure of team captain and world-class setter William Arjona. Nicolás Uriarte, while not Arjona, is a suitable replacement, and will be able to lead the team offensively. There is no question that Evandro Guerra, Robertlandy Simon and Yoandry Leal are among the world’s best at their respective positions, which means Cruzeiro’s quest for a sixth Superliga is very plausible.