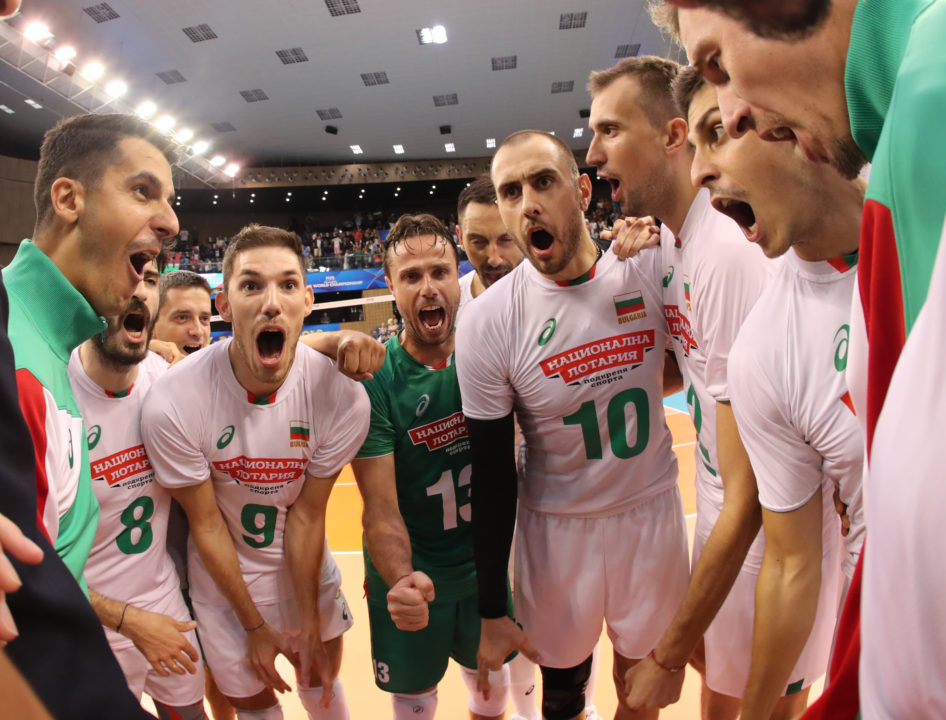 A team-high 14 points for Valentin Bratoev (#10) led Bulgaria to a first win of the 2018 FIVB Men's Volleyball World Championship in front of a home crowd in Varna. Archive Photo via FIVB

While it wasn’t quite the massive 11,000+ crowd that saw co-hosts Italy kick off the tournament in Rome, injury-rattled Bulgaria kicked off play in Varna with a 3-0 win over Finland in front of 4,850 fans in the country’s third-largest city: Varna.

“It was the best possible start,” Bulgarian coach Plamen Konstantinov said after his team’s opening win. While it was a crucial 3-point victory early in the tournament, Konstantinov tempered his enthusiasm by saying his team had areas for improvement. “We got maximum from the match as a result but we could perform better in our next games especially on the net. The team of Finland did not risk a lot. It looked like they prefer a long rallies but we managed to get most of them and to win at the end.”

While neither team made many errors (19 each), Bulgaria’s more-aggressive style led to an 8-3 serve advantage, and they were also able to dig a match-best 21 balls on the relatively-tame Finland offensive game.

30-year old Valentin Bratoev, who wasn’t on last year’s European Championship roster, led all players with 14 points in the match, having 6 in each of the first 2 sets before cooling off in the 3rd. 10 of those points came on kills, while another came from a block (the team had just 2 in the match) and 3 more came on service aces.

Nikolay Uchikov and Todor Skrimov had 12 points each for Bulgaria, a team that is without at least 4 of its regular players due to injury (including starting setter Georgi Bratoev, Valentin’s brother).

Finland, meanwhile, was led by 10 points from Urpo Sivula, with 6 on kills, 2 on blocks, and 2 from the serve. He hit just 6-for-21 in the match (28.5%), indicative of Konstantinov’s comments about a conservative style (though Finland as a team hit a respectable 47%).

Finland played to its strengths in the match, which is blocking – where they had a 9-to-1 advantage. No single player had more than 2, but Sivula, Sauli Sinkkonen, and Tommi Siirila each had that many

Next-up for Finland is a matchup with Cuba, which becomes almost a must-win already if they want to advance to the next round of the competition. Bulgaria will play Iran on Thursday, where another win would all-but-guarantee them a spot in the next round (every team with at least 2 wins in preliminary play in 2014 advanced to the 2nd round, though mathematically it doesn’t have to work out that way).