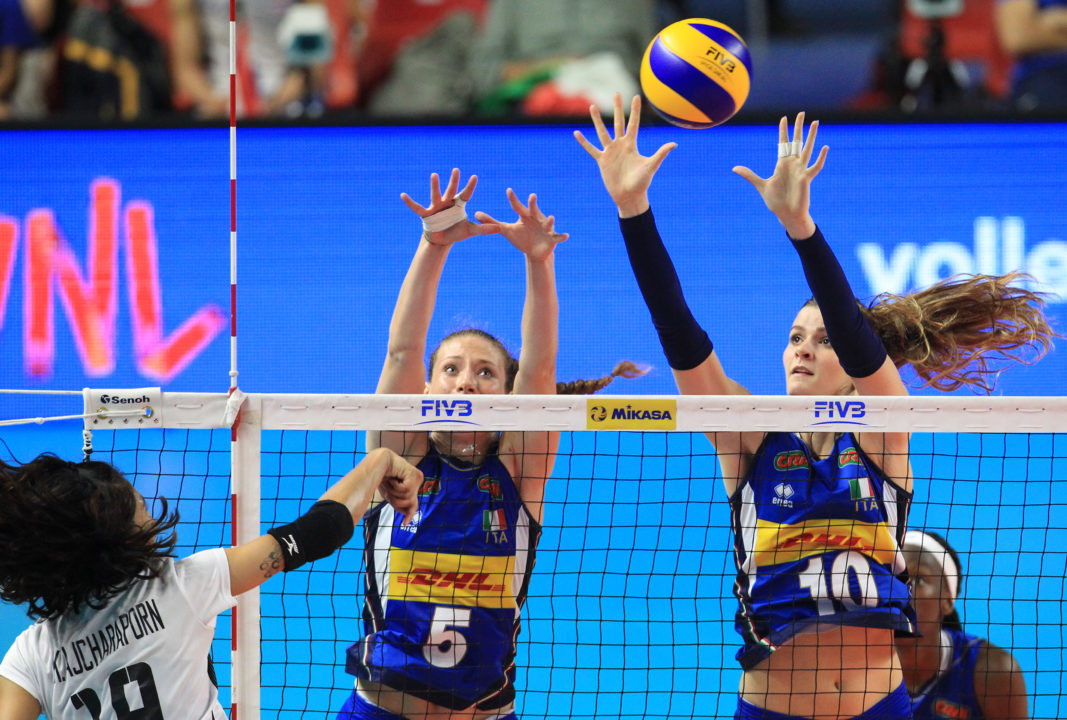 Tandara Caixeta scored 15 points in just three sets of action, many coming in a decisive fourth set in Brazil's win over Belgium, which officially punched the team's ticket to the VNL Final Six. Italy dominated the net in a quick sweep of Thailand, put-blocking its foes 13-0, to stay in the race for the VNL Final Six. Current Photo via FIVB

Tandara Caixeta scored 15 points in just three sets of action, many coming in a decisive fourth set in Brazil’s win over Belgium, which officially punched the team’s ticket to the VNL Final Six.

The one set the Brazilian outside hitter did not play in, Set 3, was lost by her side 25-21, prompting her return to the lineup to begin Set 4. In the final stanza, Caixeta delivered six putaways helping the team to a 25-23 victory.

Joining Caixeta with double-digit scoring efforts were Amanda Francisco and Ana Beatriz Correa, who posted 11 apiece. Francisco downed eight kills and added two aces and a block, while Correa put up a team-high four blocks and seven putaways. In addition to her offensive prowess, Caixeta tacked on a block and an ace. Gabriela Guimaraes recorded eight points (7 kills, 1 block), while playing in just the opening two sets. Three other players chipped in six or more points.

Britt Herbots turned in a match-high 21 points for Belgium, including eight putaways in the Set 3 win. Herbots chalked up 19 kills and two blocks to lead her team. Celine Van Gestel and Karolina Goliat followed with 11 points each. Van Gestel notched 10 kills and an ace, while Goliat tacked on eight putaways, two aces and a block. Marlies Janssens added seven points (4 kills, 2 aces, 1 block) in just over two sets of action. Kaja Grobelna, the team’s second leading scorer with 162 points, did not play in the match.

Brazil boasted the lead in kills (51-46) and blocks (10-5) and had help from 28 Belgian miscues in the win. Belgium outdid the Brazilians from the service line (8-5 in aces) and scored 20 points on errors.

In Set 4, Caixeta accounted for four of Brazil’s first seven points en route to a 7-5 advantage. Herbots countered with a few kills of her own to keep Belgium close. Brazil found a way, behind blocking from Caixeta and Correa, taking a 17-11 lead and continuing on to a seven-point advantage at 20-13 on a Caixeta ace. Belgium sliced the margin to three at 22-19, but Caixeta tooled the Belgian block twice to give Brazil a match-point try. Belgium thwarted three attempts, before Caixeta finished off the match at 25-23.

Italy dominated the net in a quick sweep of Thailand, tallying 15 more kills and out-blocking its foes 13-0, to keep itself in the race for the VNL Final Six.

The Italians outdid the Thai side 37-22 in kills and 9-3 in aces to round out the victory, while overcoming 18 miscues in the match. Thailand made just 13 errors in the loss.

Chatchu-On Moksri notched a team-high eight points, all on kills, to lead Thailand. Wipawee Srithong (5), Ajcharaporn Kongyot (5), Hattaya Bamrungsuk (4) and Watchareeya Nuanjam (3) rounded out the scoring. Bamrungsuk served up two aces, while Srithong added one. The rest of the points came on kills. Pleumjit Thinkaow did not see action in the match and Pimpichaya Kokram did not score in two sets of play despite taking five offensive swings and making three serve attempts.

The Italians cruised to victory, save a brief deficit in Set 2. Setter Ofelia Malinov won a joust and served up an ace to put Italy on top at 6-5 and again at 8-7. From there, the Italians managed to stay one step ahead.