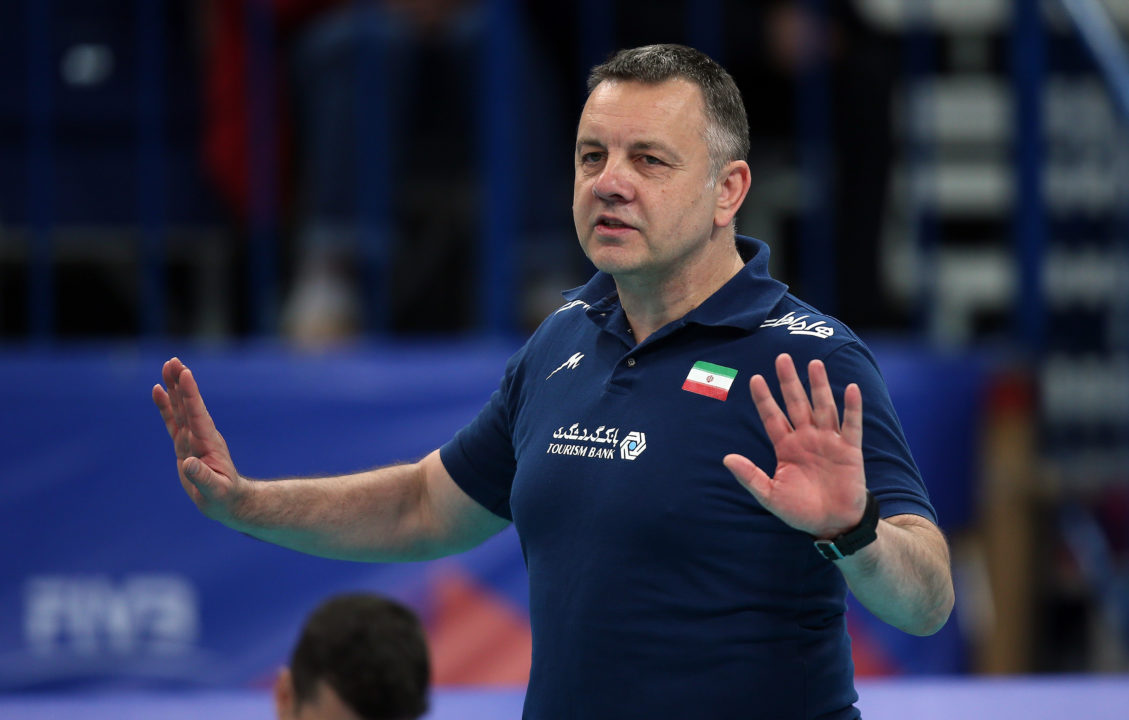 In an interview with VolleyMob's Iranian correspondent, Iranian coach Igor Kolakovic says that his team manager and several players did not receive visas to enter the U.S. for this weekend's leg of the Volleyball Nations League. Archive Photo via FIVB

Igor Kolakovic, the head coach of the Iran men’s national volleyball team, claims that several members of the team’s delegation for the 2018 FIVB Men’s Nations League stop next week in Hoffman Estates, Illinois that were denied visas to enter the United States. Kolakovic shared the news

We reached out to a spokesperson for USA Volleyball to ask about the claims by Kolakovic, and that spokesperson indicated that it was the first that she was aware of the problem, and that team rosters weren’t due until Wednesday. According to FIVB tournament hosting documents, however, it is the responsibility of the host organization, in this case USA Volleyball, to guarantee visas to visiting teams.

From the event regulations manual:

“The primary duty of the organisers of an International Competition is to guarantee entry visas to all officials, players and delegates without any excuse. The FIVB Executive Committee may declare null and void any competition held without respecting this Principle provided the visas have been requested in due time and forms by the persons concerned copied to the Organiser.”

Further, in order to host, the organizer has to present a document in which the Government of the host country “agrees to…grant the necessary facilities for visas, customs, security, bank transactions and exchange, communication, transport and telecommunication and, in general, make a direct effort towards an excellent running of the competition.”

We reached out to FIVB to ask for comment or if they had further information on why the visas were denied, but they have not responded as of posting.

“It is certain that we are going to be weakened in the USA at most as Mr. Khoshkabar is not with us,” Kolakovic said in an interview with VolleyMob correspondent Rahim Rahimzadeh Asl. The 4 players who Kolakovic says didn’t receive visas scored a combined 32 points through the first 3 weeks of play.

Iran is scheduled to play against Poland, Serbia, and the USA beginning on Friday in Hoffman Estates.

Teams are given official invitation letters from the FIVB that are intended to aid with visa acquisition.

Iranian-U.S. relations have hit a near all-time low in 2018 with President Donald Trump’s abdication of the Iran Nuclear Deal, a diplomatic olive branch crafted by former US President Barack Obama which allowed Iran to enrich uranium for the purposes of making nuclear reactor fuel. Prior to the nuclear agreement, the international community feared Iran’s uranium enrichment endeavors were solely militaristic; following the deal, world leaders from the UK, France, China, Russia, and Germany, among others, believed Iran had earnestly given up its aspirations to create a nuclear weapon. Though the Iran Nuclear Deal was controversial among American citizens, the agreement, which in some ways resembled the World Anti-Doping Agency’s (WADA) efforts to combat Russian doping and reform the Russian Anti-Doping Agency (RUSADA) through shared international oversight and inspection, Iranian citizens benefitted greatly, particularly as crippling sanctions were removed and Iran’s economy rebounded.

At present, the United States and Iran have no diplomatic relations. That does not mean the two nations do not speak whatsoever, but rather that neither country has appointed diplomats to treat with the other. For comparison, only Syria, Bhutan, and North Korea receive this kind of treatment from the United States, though North Korea and its leader Kim Jong Un has received exceptional treatment from President Trump in recent months, following North Korea’s participation in the 2018 Winter Olympic Games and continued fraternization with South Korea and other neighbors. Immigrants and all or most visitors from North Korea–and Iran–are still banned from entering the United States, per Executive Order 13769, also known simply as the travel ban.

As countries are wont to do when hit with lopsided policies from a global hegemon, Iran reciprocally banned all U.S. citizens from visiting after President Trump made the travel ban law. Though this may seem inconsequential to many American citizens, it did not come without consequences: in February 2017 Iran banned the United States from competing in a Freestyle Wrestling World Cup competition that was being held in Kermanshah, only to change course and allow the wrestlers to compete when the travel ban was temporarily blocked by a district court judge. However, when the United States was given the same opportunity to show Iranian athletes and coaches an equal level of respect it balked.

While the refusal of three visas for Iranian volleyball players and coaches undoubtedly sets an odd precedent, it also defies the International Olympic Committee’s Olympic Charter. Though there is no rule explicitly dedicated to this topic, Rule 44 of the Olympic Charter, Invitations and Entries, states under section 4:

“An NOC shall only enter competitors upon the recommendations for entries given by national federations. If the NOC approves thereof, it shall transmit such entries to the OCOG. The OCOG must acknowledge their receipt. NOCs must investigate the validity of the entries proposed by the national federations and ensure that no one has been excluded for racial, religious or political reasons or by reason of other forms of discrimination.“
Furthermore, though with regards to national Olympic committees and not a host nation’s sovereign immigration policies, Rule 27 of the Olympic Charter, Mission and role of the NOCs, also states that:
“The NOCs must preserve their autonomy and resist all pressures of any kind, including but not limited to political, legal, religious or economic pressures which may prevent them from complying with the Olympic Charter.“
The former, Rule 44, ought to encourage the USOC to take action and lobby Washington to allow the three Iranian players and coaches in question visas; the latter, Rule 27, might also encourage the USOC to consider its earnestness in the 2028 Olympic Bid, particularly, the legacy the 2028 Games want to create: inclusivity and sportsmanship.