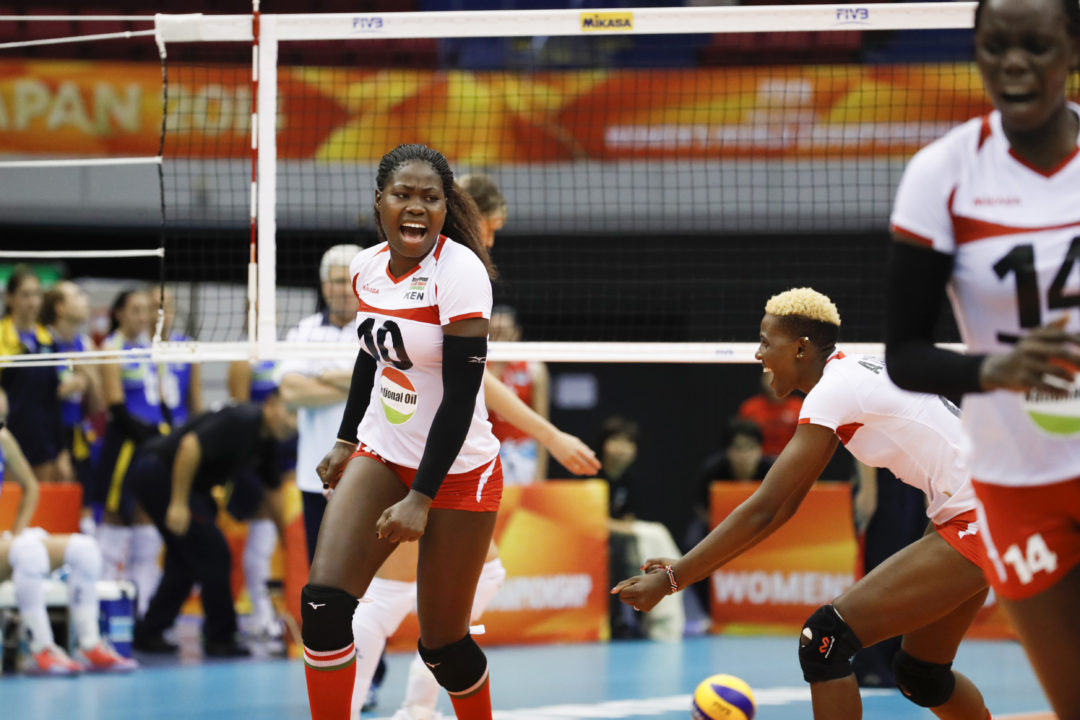 As was the story of day 1 in all 4 pools, there were no real upsets in Pool D, with a quartet of sweeps.

Following the lead of the continental champions Cameroon earlier in the day, Kenya picked up their first-ever win at the FIVB Women’s Volleyball World Championships, and  Africa’s 2nd-ever, in the late came in Hamamatsu. Kenya had appeared in 5 prior World Championship tournaments, and they lost all 21 matches they played in those 5 tournaments (1994, 1998, 2002, 2006, 2010)

Brazil also got a sweep of Puerto Rico – after a tough 1st set, they almost held Puerto Rico to a new record-low of 7 points in the 3rd set. Serbia, finally healthy, opened their tournament with a 3-0 sweep of the  Dominican Republic.

After an apparent lack of respect for their opponent to open the match, which almost allowed Puerto Rico to steal the opening set, Brazil became way more aggressive in the 2nd-and-3rd sets, and rolled to a dominant 3-set victory.

“Today was a nervous situation being the first match for the players,” Brazilian head coach Jose Guimaraes said. “We had some weird movements in the first set. Puerto Rico has been performing better recently. We were more aggressive in the second and third sets and that made the difference.”

Tandara Caixeta, usually the team’s offensive leader, scored only 11 points on the match with 9 kills on 17 swings and 2 kills. Fernanda Rodrigues led Brazil with 13 points. She had the same 9-for-17 hitting percentage as Fernanda, but she added 3 blocks and an ace to her tally. Fernanda had 12 points through 2 sets, but only scored 1 in the clinching finale.

That 3rd set saw Brazil rush to a 15-0 and 16-1 lead before relenting ever-so-slightly at the end of the match. The all-time record for futility in the rally scoring era is a 25-6 win by Peru over Egypt in 2006.

Serbia took no chances against a dangerous Dominican Republic team, playing their starting 7 for effectively the entire match, and dominated in a 3-0 victory. Brankica Mihajlovic, returning to the team after knee surgery in June, led all players with 22 points on 18-for-34 hitting (52.9%).

Her partner-in-crime Tijana Boskovic had 15 points (15-for-35 hitting).

The DR was led by 10 points from their 6’7″ outside hitter Brayelin Martinez, but overall the offense was stifled by 10 Serbian blocks and big back-row defense from Boskovic and libero Silvija Popovic, who had 10 digs each. Popovic also had 50% excellent receiving in the match.

The Dominican defense doesn’t get the same positive responses, as Serbia shelled their back-row throughout the match. The team also struggled in service receipt – they had just 14.3% excellent reception, which was the lowest of any team in any pool on day 1 of the tournament.

The Serbian captain Maja Ognjenovic wasn’t shy about declaring her team’s quality after the match.

“I think we are one of the best teams in the world,” Ognjenovic said. “We are in good condition and in good shape. We have trained hard and long for this competition. We will do our best.”

Her coach was more temperate in his review.

“It was a good game,” said Terzic. “We must be satisfied even though we could not play strongly all the way to the end. We have started with a win and that is important.

Veteran Kenyan outside hitter, 29-year old Mercy Moim, led all players with 28 points as Kenya picked up their first-ever World Championship win in 22 tries over Kazakhstan 3-0. Moim hit 25-for-42 (59.5%), with 12 points in the clinching 3rd set, and also added 3 of her team’s 11 blocks.

“This means a lot,” the team captain Moim said after the match. “It is our first time to win at a World Championship. We believed in ourselves and our training. Our coaches prepared us well. We played like normal against Kazakhstan and did what we do in practice.”

Moim carried her team to the victory – while she was very efficient in the match, the rest of the team hit just 36.5%. Middle blocker Triza Atuka contributed all 3 of the team’s aces.

Sana Anarkulova had 13 points to lead Kazakhstan, with the team looking a  little flat throughout the match, especially next to the energetic Kenyan side. Anarkulova hit 9-for-19 and added 4 blocks to the team effort.