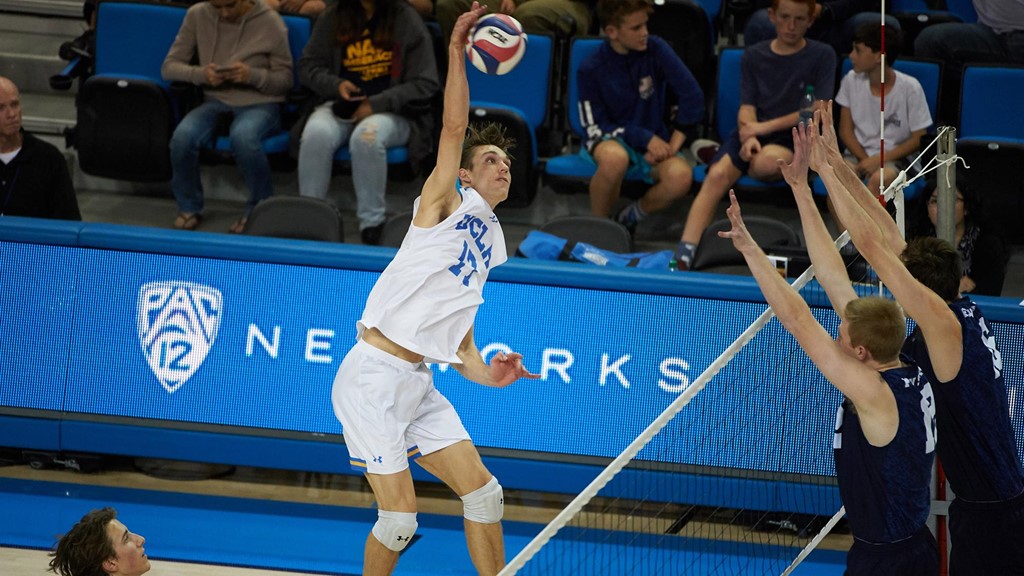 UCLA extended its win streak to six matches with a stellar offensive output on the road against No. 9 GCU. The Bruins hit at a season-high .494 clip, marking their fifth straight effort over .400, in the victory.  Current Photo via UCLA Athletics

UCLA extended its win streak to six matches with a stellar offensive output on the road against No. 9 GCU. The Bruins hit at a season-high .494 clip, marking their fifth straight effort over .400, in the victory.

Senior opposite Christian Hessenauer drove the ship for the Bruins with 14 kills on a .458 hitting effort to go with four blocks and a team-best six digs. Sophomore middle Daenan Gyimah and junior outside Dylan Missry added nine kills apiece and senior outside JT Hatch chipped in seven. Redshirt senior middle Oliver Martin and junior setter Micah Ma’a rounded out the balanced attack with five putaways each. Gyimah put up a team-best six blocks, while Martin hit at a .833 clip (5-0-6) and Ma’a added two aces.

UCLA hit at a match-high .571 clip in Set 3 as Hessenauer turned in four kills and two blocks. Gyimah served up two aces in the stanza, while Ma’a added one. Six Bruins notched kills in the set, which saw UCLA close out the match on a 7-3 run. Leading 18-15, the visitors scored three of the next four, including kills by Gyimah and Hatch and a Ma’a ace. A kill and an ace by Gyimah aided the final 3-0 run to seal the 25-18 victory and the sweep.

The No. 2-ranked UCLA men’s volleyball team used a season-high .494 hitting percentage to capture its sixth straight match and improved its records to 13-1, 2-0 in Mountain Pacific Sports Federation (MPSF) league play with a straight set win at No. 10 Grand Canyon on Saturday evening. Scores of the match were 25-19, 25-18, 25-18.

The victory marked the fifth straight match in which the Bruins had registered at least a .400 hitting percentage. The 13-1 start to the season is the best by a Bruin team since the 2005 edition secured 15 wins in its first 16 matches. UCLA will return home to face No. 14 USC on Wednesday night in Pauley Pavilion at 7 p.m.

In set one, UCLA opened up a 5-1 lead. The Antelopes closed to 10-8, but the Bruins scored the next two points on a kill by Christian Hessenauer and a Micah Ma’a / Daenan Gyimah block. GCU came back again to within two, at 15-13, only to see Hessenauer answer and UCLA went on to up the margin to 20-15. A Hessenauer / Gyimah block made it 23-18. Two more kills by Gyimah ended the set at 25-19 for the Bruins. UCLA hit .517 and was led by Hessenauer’s five kills.

In the second set, Grand Canyon took the early lead. The score was then tied at points three, six and seven. UCLA went up 9-7 on kills by Hessenauer and Oliver Martin. GCU came back to tie the score with two quick points. The Bruins responded with three straight on kills by Hessenauer and Missry sandwiched around a block by Missry / Martin. The Antelopes never moved closer than two the rest of the set with the Bruins earning the win on a block by Missry / Gyimah. UCLA hit .419 for the set and Hessenauer collected another five kills.

UCLA moved to a 7-3 lead to start set three. GCU closed to 10-8 and then a Hessenauer kill made it 11-8. The Antelopes rebounded to within two at 11-9 and then at 13-11. UCLA tallied the next two points on a Hessenauer kill and a Ma’a kill. The Bruins built the lead to 18-13 after a Gyimah block. Two points by GCU were answered by three straight from the Bruins on an Antelope error, a kill from Gyimah and an ace by Ma’a. Gyimah finished off the match with his career-best tying third of the contest in a 25-18 win. UCLA hit .571 for the set.

Gyimah had a big match for the Bruins with nine kills (.667), three aces and six blocks. Hessenauer led UCLA in kills for the fourth straight match with 14 while hitting .458. Hatch and Hessenauer topped UCLA with six digs each. Missry added nine kills and hit .471.  Martin totaled five kills (.833) and three blocks. UCLA won the blocking battle 10.0 to 4.5. The Bruins held the Antelopes to a .179 hitting percentage which marked the seventh time this season the Bruins have limited the opponent to a percentage under .200.

The bright spot on the night was the 1,524 fans packed into Antelope Gym, breaking the all-time attendance record for the second time this season. The Lopes battled but ultimately fell short for their first loss in over two weeks.

“UCLA is second ranked in the country for a reason.” Said head coach Matt Werle after the match. “They have some very gifted athletes. The only way that we will be able to beat a team like that is if we can execute our scouting report. Our scouting report was next to perfect tonight and we just didn’t make UCLA uncomfortable by any means.”

The Bruins led in every aspect of the match. In two separate sets the visitors hit .500 or better while keeping GCU under the .300 mark all night. Overall, GCU hit at a .179 mark and recorded 27 kills, four blocks, 27 assists, 18 digs and did not land an ace. The Bruins posted a .494 hitting percentage and led the Lopes by at least five in every category except digs.

GCU’s attack was led by Luke Turner and Cullen Mosher for the second consecutive match, each recoding team-leading seven kills.  Zachary Melcher got the start on the night and went on to record 18 assists, three kills and led the team in digs with five. Ashton King continued to lead the Lopes on defense with three blocks, one of which came solo.

UCLA got out to a fast start in set one and would not yield. The Bruins led 3-7 thanks to five kills, an ace and a block. Lopes would come within two points a few times throughout but never caught momentum as the Bruins took the set 19-25.

The Lopes responded by coming out strong in the second set posting a 2-0 lead. From there, play would go back-and-forth until the score was tied at 9-9. UCLA would go on to score five of the next six points to re-take the lead and force a GCU timeout. The Lopes came out of the timeout with a Caleb Blazer kill and forced a Bruins error to bring the set to within two but it would not be enough as UCLA held the Lopes to just three more points and took the second.

The third set was the Bruins most efficient of the night as they attacked early and often to a tune of a .571 hitting percentage. The Lopes battled, hitting at their best mark for the night, .263, but came up short. The sweep was the first at home for GCU since Feb. 6, 2015.

“They went to what worked for them and what has been working for them, we just didn’t put ourselves in positions to make them uncomfortable.” Werle added. “We need to be smarter and work harder than teams like this in the future to give us a chance to win. We look forward to seeing them again.”

The Lopes will stay at home for another week as they welcome BYU and Stanford to town, continuing conference play. BYU comes in on Thursday, Feb. 15 with a No. 7 national ranking and will be the only team in 2018 to face the Lopes in GCU Arena instead of Antelope Gym. Following the ranked matchup, Stanford will face the Lopes on Saturday, Feb. 17 back in Antelope Gym. Both matches are set to begin at 6 p.m. (MST).