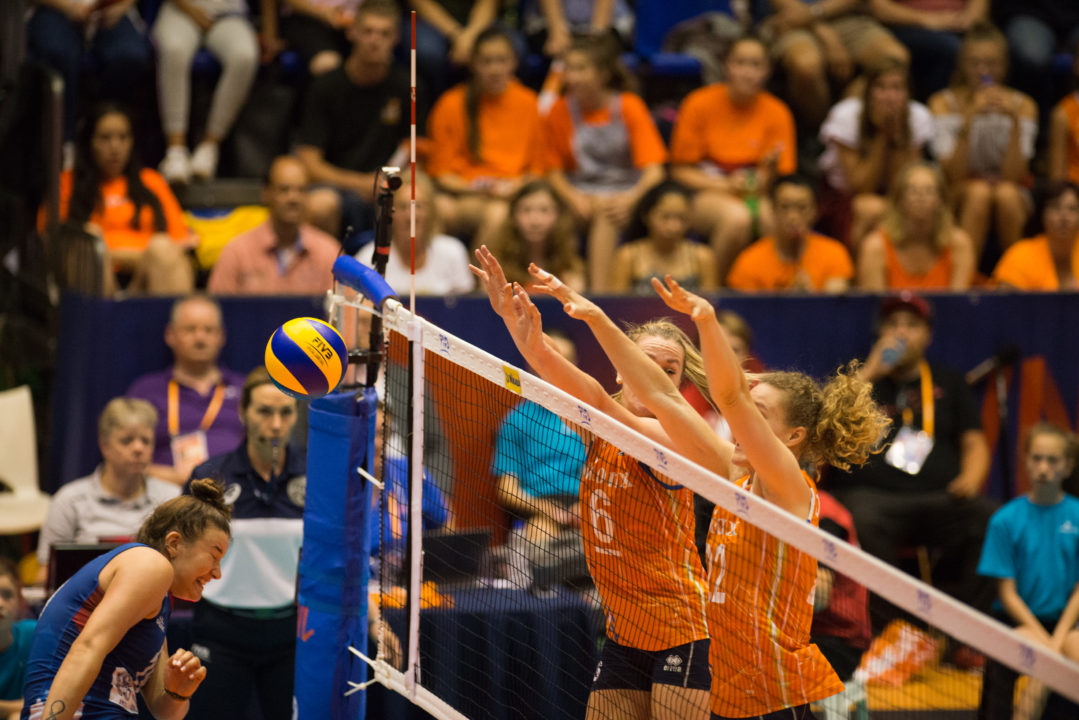 Italy bested the Dominican Republic in all phases of the game in an important sweep to keep Italy in the VNL Final Six race with its fifth straight win. The Netherlands rallied from two sets down to keep pace in the Final Six race, with help from 19 blocks and 33 Serbian miscues.  Current Photo via FIVB

Italy bested the Dominican Republic in all phases of the game in an important sweep to keep Italy in the VNL Final Six race with its fifth straight win.

Chirichella racked up 10 points in the opening set as the Italians jumped ahead 4-0 and cruised to a 25-18 win.

Pietrini and Bosetti starred as Italy built a 19-14 lead in Set 2. Chirichella took the spotlight to end the set at 25-15 on a block.

The Dominican Republic grabbed a 6-2 advantage in Set 3, but saw that slip away as Italy scored nine of the next 12 points to surge into the lead. The DR regained the advantage, but fell victim to a 5-0 run by Pietrini in a 25-20 loss.

The Netherlands rallied from two sets down to keep pace with Serbia and Turkey in the VNL Final Six race, with help from 19 blocks and 33 Serbian miscues.

Yvon Belien led the home team with 17 points, posting 11 kills and a team-best six blocks. Maret Balkestein-Grothues added 14 points on 11 putaways and three blocks. Celeste Plak notched 12 points (11 kills, 1 ace) after coming in as a sub in Sets 2 and 3 and starting the final two. Juliet Lohuis chipped in eight points in just three sets of play, posting four blocks, three aces and a kill over the final three stanzas.

Tijana Boskovic scored a match-high 35 points, but it was not enough for Serbia. Boskovic downed a match-leading 31 kills and added four blocks. She had help from four other players with nine or more points. Milena Rasic added 19 points with 13 kills, a team-leading four aces and two blocks. Jovana Stevanovic followed with 10 putaways, while Bojana Milenkovic and Jelena Blagojevic posted nine points each. Blagojevic served up four aces, while Milenkovic chipped in seven kills and two blocks.

Serbia cruised to an 8-2 advantage in Set 1 as Rasic starred from the service line and Stevanovic provided the offense. The Dutch struggled to find their footing, aiding the Serbian cause with several errors, while Boskovic helped the visitors seal the 25-15 win.

Rasic served up her fourth ace of the match and Blagojevic wreaked havoc with her serve on a six-point run as Serbia cruised to a 25-19 victory.

Facing a 16-12 deficit in Set 3, the Dutch turned to Plak who came through with three points to narrow the gap. The teams went to extra points and Plak again rallied the troops, saving two of Serbia’s three match-point tries until a hitting error by Boskovic ended the set 29-27 in favor of the home side.

The Dutch carried the momentum into Set 4 as Plak continued to shine and the team also picked up its blocking game, stopping Boskovic at every turn. Lohuis supplied two aces and Belien downed the set-winner to force a decisive fifth set.

Serbia had another chance at the match, leading 16-15 in the final stanza, but couldn’t convert. In the end, it was an Anne Buijs kill that gave the Dutch the win on their sixth match-point try.