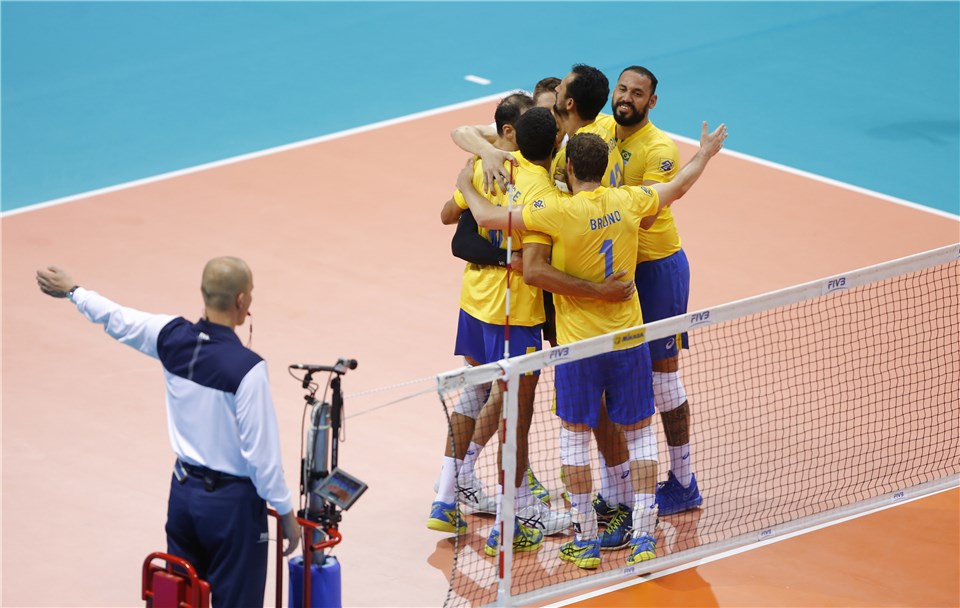 Serbia and Germany were doomed by their own errors in losses to Italy (3-1) and Brazil (3-0) on opening day of Volleyball Nations League play.  Current Photo via FIVB

Germany could not get past its 35 team errors or a 20-point scoring effort by Ivan Zaytsev, falling to Italy in four sets in Friday’s Volleyball Nations League opener.

Zaytsev piled up a match-high 18 kills and two aces in the winning effort for Italy. He had offensive help from Osmany Juantorena and Simone Anzani, who posted 10 kills apiece. Enrico Cester and Oleg Antonov added eight points eight, with Antonov chipping in six kills and Cester serving up three of the team’s eight aces. Simone Giannelli was the team’s top blocker with three stuffs.

Up 16-10 in Set 1 behind Zaytsev’s offensive prowess, all but the put the stanza out of reach for the Germans.

Set 2 was a much closer affair with Italy boasting just a two-point lead at 12-10 midway through. Two Zaytsev aces down the stretch closed out the 25-19 victory.

A 16-14 lead was not enough of a safety net for the Italians in Set 3 as Germany chipped away, tying it up at 22 all before capturing the win on back-to-back errors.

Germany carried the momentum to a 5-2 advantage in Set 4, but could not hang on as Italy surged ahead 11-8 and led by as many as five at 16-11 and 20-15 before closing out the match on the final German miscue.

Serbia held its own offensively and from the service line, but could not get around the Brazilian block or get out of its own way (28 errors).

Wallace De Souza was the top scorer in the match, putting together a 17-point effort for Brazil, combining 11 kills, a team-high five blocks and an ace. Mauricio Silva scored 13 points, notching 11 putaways and two stuffs. Next on the team were Luiz Fonteles (6) and Lucas Saatkamp (6). Fonteles accounted for four kills and a team-best two aces, while Saatkamp turned in four kills, a block and an ace.

Wallace and Atanasijevic went head to head in Set 1, but in the end Serbia committed too many errors to threaten Brazil in a 25-22 loss.

It was knotted at 15-all in Set 2 before Brazil took control, eventually grabbing the 25-22 win on a service error.