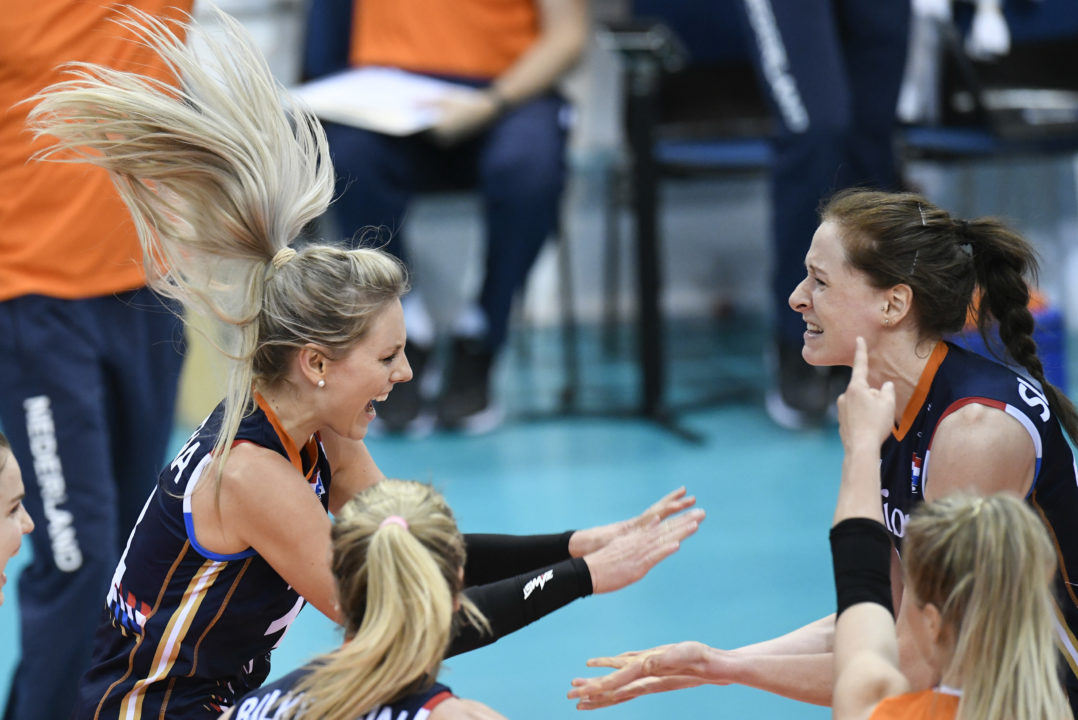 Thirty-seven errors and 16 Dutch blocks secured the Netherlands a five-set win over Turkey on Tuesday, meanwhile 37 errors were just two much for Germany to overcome as it let a 2-0 lead slip away into a five-set loss.  Current Photo via FIVB

Thirty-seven errors and 16 Dutch blocks secured the Netherlands a five-set win over Turkey on Tuesday.

Hande Baladin paced Turkey in the match, tallying 17 points (15 kills, 1 block, 1 ace) despite missing the first set and playing as a substitute in Set 2. Meliha Ismailoglu (15), Eda Erdem Dundar (13) and Meryem Boz (10) also notched double-digit point tallies. Ismailoglu put down 11 kills and served up a team-high three aces and a block. Boz’s 10 points all came on kills as she started sets 1, 2 and 5. Erdem Dundar chimed in with nine kills, a team-best three blocks and an ace. Zehra Gunes played just the first two sets, with six points (3 blocks, 2 kills, 1 ace). Thirteen different players saw action in the match, with 11 scoring at least one point. Starting setter Gamze Alikaya did not enter the match full time until Set 3.

Turkey rallied from two sets down to send the match to a fifth-set, but came up just short in the finale. After a tie at 8-all, a Sloetjes kill and a hitting error by Boz gave the Dutch the edge the needed en route to a 15-10 win. Belien supplied the final nail.

The Netherlands rolled to a 10-3 lead in Set 1 and saw the advantage swell to 16-4 as Koolhaas, Sloetjes and Buijs starred. Buijs closed out the 25-11 win as Turkey gave away six points on miscues.

The Dutch grabbed an 8-3 advantage in Set 2, but Turkey gained its footing when Alikaya came in at setter. The Turkish side earned the first set point try on an Ebrar Karkurt kill. The Netherlands thwarted two Turkish set-point attempts, before earning six of its own en route to a 31-29 win. Sloetjes gave the Dutch the 2-0 match lead.

Turkey came out with renewed strength in Set 3, going up 10-5. Baladin, Erdem Dundar and Gunes found their form and guided the team to a 25-16 win.

Set 4 saw the Dutch take control early at 6-1. Turkey countered late, going up 20-17 on a Boz kill and Ismailoglu ace. Baladin gave the Turkish side hope, capping the set at 25-20.

Thirty-seven errors were just two much for Germany to overcome as it let a 2-0 lead slip away into a five-set loss on Tuesday.

With Louisa Lippmann sitting the match out, Kimberly Drewniok led the Germans with 23 points followed by Jennifer Geerties (19) and Maren Fromm (13). Drewniok downed a match-high 19 kills and added two blocks and two aces, while Geerties added 17 putaways and Fromm chipped in 11. Fromm also served up two aces, while Denise Hanke came through with a team-best four perfect serves. The team played 12 of its 14 players, save Lippmann and Ivana Vanjak.

Momentum was on China’s side in Set 5 after the team rallied from down 2-0 to force the tiebreak. A block by Hu made it 5-3 China and a putaway by Yuan pushed the Chinese lead to four en route to a 15-8 win.

China went up 14-9 in Set 1, but Germany rode the home crowd and a serving run from Hanke, including three aces, to an 18-17 advantage. Chinese miscues aided the Germans down the stretch in a 25-20 win.

After falling behind 12-7 in Set 2, Germany took advantage of China’s error-riddled attack and Geerties came to life as the home side swiped a 27-25 victory.

With No. 1 China facing possible defeat, the team kicked off Set 3 with a 4-0 run and cruised to a 25-17 win with help from a strong blocking effort.

The Chinese went ahead 7-3 in Set 4, but Germany was a force at the net and boasted a 23-22 lead late. China rallied for three straight points, including a hitting error by Geerties which capped the 25-23 win and brought on the decisive fifth set.