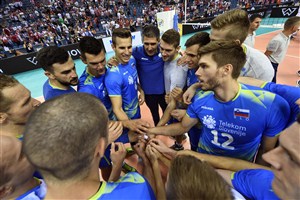 After four playoff matches on Wednesday, the European Championships quarterfinal is set. The eight remaining teams do not include defending champion France, which was ousted by the Czech Republic on Wednesday.

Two of the four quarterfinals are rematches from pool play as Pool B winner Germany faces a familiar foe in the Czech Republic and Pool C champ Russia takes on Slovenia.

The winners of  the Serbia/Bulgaria and Germany/Czech Republic will play in the semifinals, while the winners of Russia/Slovenia and Belgium/Italy will battle for a spot on the podium.

This quarterfinal features a pair of Pool B teams as Germany won the Czechs finished third at 1-2. The Germans are currently ranked 10th in the world, while the Czechs are No. 27.

This quarterfinal pits the first and third place teams in Pool C against each other. Russia, which is the world No. 4,  won the pool play meeting over the No. 23 Slovenians in a sweep, Aug. 26.

The Russians outblocked (12-7) and outserved (6-4) its foe, while hitting at a 56 percent efficiency. Slovenia hit 49 percent for the match and managed four more kills (44-40). The Slovenians also gave away four more points on errors (24-20).

It was a balanced attack by both sides as Maxim Mikhailov (15), Dmitrii Volkov (12) and Artem Volvich (10) paced the Russian scoring and Toncek Stern (14), Alen Sket (13) and Tine Urnaut (10) all reached double-digits for the Slovenian side.

Pool A winners Serbia will face a new foe on Thursday in Pool C runnerup Bulgaria. The 11th-ranked Serbians are looking to best their seventh place finish in 2015, while No. 14 Bulgaria

The Serbians are looking to return to the Euro Championships podium for the first time since winning gold in 2011 and bronze in 2013. The team just missed the final four at this summer’s World League championships, finishing fifth.

The Bulgarians look to make their second straight semifinals appearance, after finishing fourth at home in 2015. The team was ninth in World League play earlier in the summer.

Serbia and Bulgaria met in the third week of World League play with the Bulgarians winning in a close five-set affair (25-18, 20-25, 25-23, 26-24, 15-12). Tsvetan Sokolov was the top scorer for Bulgaria with 26 points, including 19 kills and five blocks. Uros Kovacevic starred for Serbia with 15 points, tallying 12 kills and three blocks. Bulgaria put up 21 stuffs in the win.

No. 4 Italy, the defending Olympic silver medalists and defending European Championship bronze medalists,  will technically be playing the role of the underdog in the match, despite Belgium’s No. 15 ranking as the later won its way to the quarters with a pool play title.

Belgium finished seventh in World League action, while Italy was 12th in Brazil this summer. The Belgians downed the Italians in four sets during Week 3 of World League play (25-22, 26-24, 25-27, 25-16). Bram Van Den Dries was Belgium’s top scorer with 20 points, including 16 kills, while Luca Vettori did the heavy lifting for Italy with a match-high 22 points.

One caveat to Belgium’s chances in the match is the health of middle blocker Pieter Verhees, who injured his ankle in the pool D finale against the Netherlands.