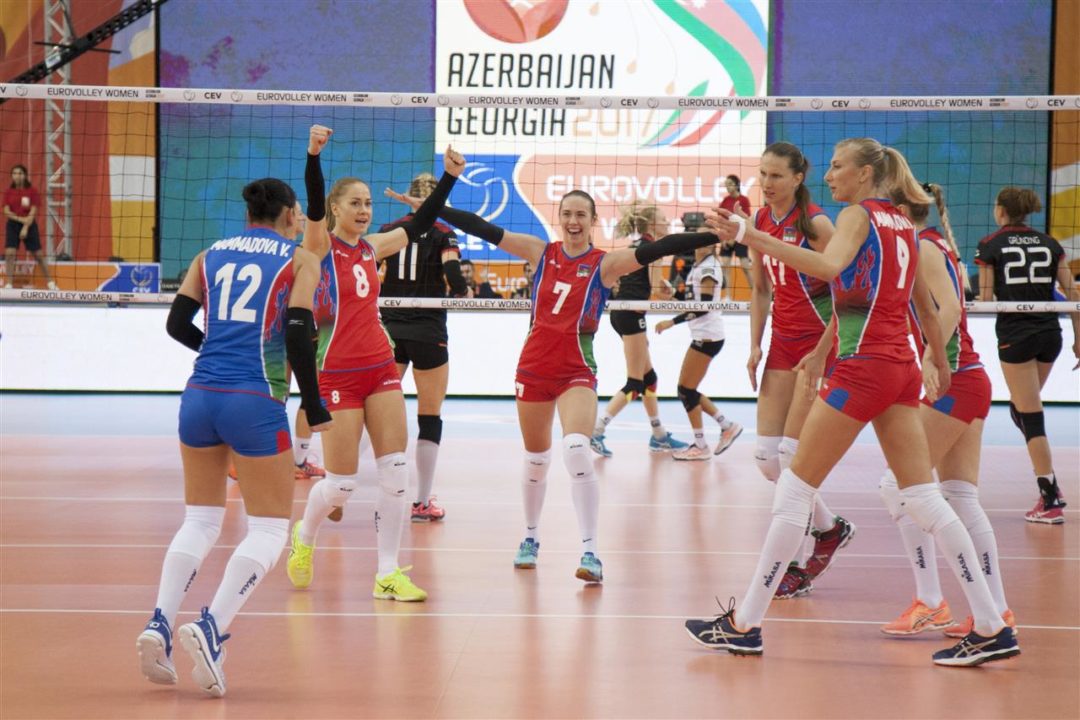 Serbia, The Netherlands, Azerbaijan, and Turkey will battle it out. Who are the gold medal favorites? Current Photo via CEV

Italy, Belarus, Germany, and Russia have packed their bags and gone home. Now, only the best remain, as Serbia, The Netherlands, Azerbaijan, and Turkey will battle it out for continental gold over the weekend. VolleyMob previews and picks winners for each match, and aware you on which player match-ups to focus on.

Azerbaijan vs. The Netherlands

This will be one of the most exciting games of the year. On one side, you have the tournament’s current silver medalists, who just easily defeated the competition’s favorite squad to win gold. On the other, you have hosts Azerbaijan, the biggest sensation of the tournament so far, having advanced effortlessly through all of its rounds.

Azerbaijan’s clobbering of its opponents means it lost only one set until now, behind Polina Rahimova‘s elite play, who will most certainly be the tournament’s MVP. Meanwhile, Netherlands’ roster has played consistent volleyball thus far in the tournament as well, minus their loss to Serbia in pool play.

If Azerbaijan wants to continue its dominant run, it will have to take advantage of Netherlands’ biggest weakness: reception. The Netherlands has the second worst receiving efficiency of the tournament, at only 24%. However, as a testament of the evolution of female volleyball, they boast the tournament’s third highest attack efficiency at 35%. Meanwhile, Azerbaijan is tied with Serbia for the competition’s best attack efficiency at 37%, and is 4th on blocks with 2.8 stuffs per set.

Azerbaijan is having a Cinderella Run at home, even having its president and first lady attending all its games. Emotionally, they are our favorites to win this match and move on to the finals. However, the Dutch squad is very experienced and are used to this kind of pressure, and have faced much tougher opponents than Azerbaijan in pool play and in the playoffs. It wouldn’t be rational to pick against them. Netherlands wins in four sets.

Player match-up to look out for

Both teams will heavily rely on their star outside hitters to carry them to success. The Dutch have experienced superstar Lonneke Sloetjes, who always come up big in important games, just as she did against Italy in the quarterfinals, netting 20 points in three sets of play on an absurd 61% hitting efficiency. Polina Rahimova will lead the way for Azerbaijan. She is averaging a ridiculous 7.2 points per set, which leads the tournament, having scored 20+ points in all of her team’s matches, at 51.3% spiking efficiency. She is also the tournament’s second best server at 0.62, a stat she will have to put to good use against the Dutch’s abysmal receiving line.

Turkey pulled off the biggest upset of the tournament so far by eliminating Russia in the quarterfinals. Its squad is playing a recovering effort, after losing its first two games and earning a berth in the second round at the very last minute. Since then, it has adapted to its surroundings and has amassed convincing wins in disciplined play. Meanwhile, Serbia is its usual self, always overachieving, despite its numerous setbacks. The same team that won a silver medal in the Rio games without seven of its usual players, is once again without seven of its stars, including starter and back up setters, and playing masterfully, having lost only one set in the competition so far.

Turkey boasts the second best receiving line in the competition, with 48% efficiency, which they will have to make good use of if they hope to get past Serbia’s amazing service game, which leads the competition at 2.5 aces per set. Turkey is also serving well, boasting the tournament’s third best numbers at 1.9 aces per set, a fact they will have to take advantage of, as Serbia sports only 26% passing efficiency, the 4th worst squad in the competition. However, in a trait similar to the Dutch, they do lead the competition in attack efficiency, tied with Azerbaijan at 37%. The fact that Turkey has the second best blocking in the tournament at 3.4 stuffs per set clearly shows this will be an attack x defense match.

Turkey is playing very well after its horrible start to the competition. However, Serbia just plays through all of its hardships like it’s nothing, making it difficult to pick against it, even though its roster is completely broken. Serbia wins in four sets.

Player match-up to look out for

Tijana Boskovic is a superstar. She is averaging 7.1 points per set, second in the tournament, on 42% hitting efficiency, while also leading the tournament at 0.67 aces per set. She is her squad’s most important asset. Meanwhile, Turkey will rely on Meryem Boz, who had a very slow start in the competition, but has come off the bench to average 7 points per set in her two playoff matches.