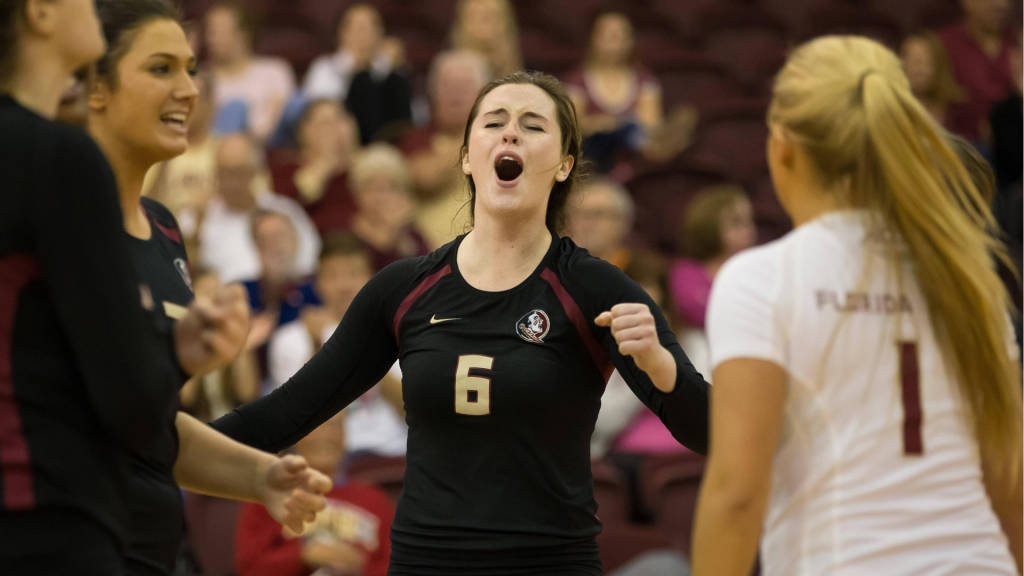 Florida State’s season ended in the Sweet 16, and in the aftermath it featured a 26-6 record (17-3 ACC), a #13 final finish in the AVCA Coaches Poll and an NCAA Tournament win in the second round over rival Florida. As they look to build on a successful 2016, they will feature a highly-touted five woman recruiting class to offset some key roster losses.

Two of the five incomers were listed on the high school Under Armour All-American team in Adrian Ell and Taryn Knuth. Ell is a 6’2″ setter from Archbishop McNicholas High School in Cincinnati, Ohio and was a jack-of-all-trades in her prep career, recording 268 assists (3.08 per set), 257 digs (2.95 per set), 205 kills (2.36 per set), 61 blocks and 50 aces (0.60 per set) in her final season. She even overcame cancer in fighting her way to a big-time Division I scholarship. While Ell was on the Under Armour All-America third team, Taryn Knuth made the first team. The 6’3″ middle blocker from Johnston High School in Iowa was the ninth ranked recruit by PrepVolleyball and has experience with the USA Junior National Team.

Knuth isn’t the only middle blocker joining the program either. Deja Williams, a 6’2 middle blocker from Suwanee, Georgia, and Tiana Jackson, a 6’2″ middle blocker from O’Fallon, Missouri, will be freshmen in the fall season. Williams partook in the U.S. Women’s Junior National Training Team and was ranked as the 45th best recruit in the country by PrepVolleyball. Jackson meanwhile was ranked 87th as she was First-Team All-Conference in the Gateway Athletic Conference.

Last but not least is Mariah Brim, who brings plenty of height as a 6’6″ right side from Overland Park, Kansas. She was a two-year letter-winner at Aquinas High School, where she totaled 349 kills (1.75 per set) and 136 blocks in her senior season.

Overall, the class is ranked as the eighth best in the country by PrepVolleyball. It’ll assist in offsetting some key losses like All-ACC First-Team performer Katie Horton. They also lose two All-ACC Second Team middle blockers in Mara Green and Melanie Keil, which they will hope to fill with three incoming freshmen at the position.

Beyond the losses and newcomers, Florida State will look to rely on outside hitter Milica Kubura, who was named AVCA All-America Honorable Mention and will look to star in the offense as a senior.