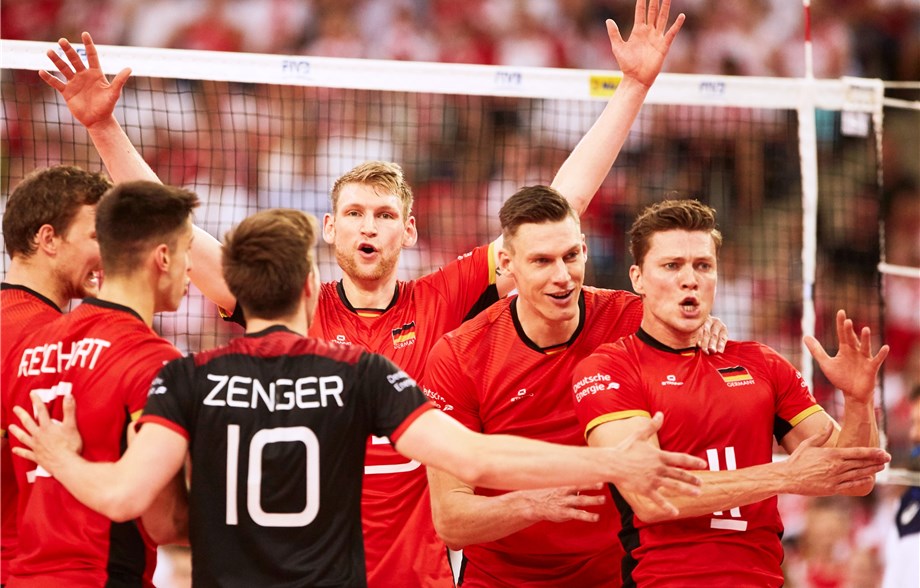 Germany led Poland in all facets of the game and overcame a 21 point effort by Michal Kubiak for a four-set victory on Sunday, handing Poland its first VNL loss. Chuan Jiang's efforts were finally rewarded as he poured in 30 points for No. 20 China in a five-set win over No. 10 France.  Current Photo via FIVB

Germany led Poland in all facets of the game and overcame a 21 point effort by Michal Kubiak for a four-set victory on Sunday, handing Poland its first VNL loss.

A balanced attack served the Germans well with five players notching nine or more points. Moritz Reichert (12), Simon Hirsch (12), Marcus Bohme (10), a rested Christian Fromm (9) and Tobias Krick (9) made up the group. Reichert downed 11 kills and added an ace. Fromm scored all nine of his points on kills and Hirsch added seven kills and a team-leading four blocks. Bohme and Krick each chipped in three stuffs, while Bohme and Lukas Kampa added two aces apiece.

Kubiak did all he could for Poland, turning in 15 kills, four blocks and two aces, but didn’t have much help from his teammates as the team used a unique lineup in the match. Bartosz Kurek notched seven points, but did not start, while Bartosz Kwolek tallied six points, starting just the final two sets. Dawid Konarski played sparingly and Jakub Kochanowski started just the final two sets, combining for just two kills in seven swings. The team utilized all 14 of its players in the loss.

Hirsch guided Germany to victory in the first two sets and Kubiak returned the favor in Set 3 to extend the match.

Kubiak’s efforts had Poland sitting at set point at 24-23 in Set 4 in an error riddled fourth set. The Poles had another try at 25-24, but could not close the door. Boehme came through to tie it at 25 and Hirsch gave Germany its first match-point attempt. Setter Lukas Kampa then served up an off-the-net ace to seal the upset and leave the home crowd begging.

Victory for 🇩🇪:
“We wanted to approach the game in the best way possible” says @LukasKampa after @TeamGER_Volley defeated @PolskaSiatkowka 3-1 in #VNL in Łodź#BePartOfTheGame#Volleyball pic.twitter.com/OLHTpejaU7

Chuan Jiang‘s efforts were finally rewarded as he poured in 30 points for No. 20 China in a five-set win over No. 10 France.

France held Jiang to just three points in the opening set, but couldn’t stop his 26 kills, over the remainder of the match. He racked up an ace, a handful of kills and a block in the decisive fifth set, including the match winner.

After rallying to take Set 4, the French carried the momentum into Set 5, cruising to a 4-1 lead. Jiang then tooled the French block to tie the score at 5-all. Down two again at the changeover, Jiang added two putaways to pull the teams even at nine. China registered a block and forced a French miscue to go up 11-9, setting the table for Jiang to score two more down the stretch.

Jiang had a little help from Jingyin Zhang‘s eight kills and a block, while Shuhan Rao chipped in eight points on four kills, a team-best three blocks and an ace.

France had four players score in double-digits and two more with eight or more, but could not find an answer in the end. Kevin Tillie (16), Thibault Rossard (15), Stephen Boyer (13) and Jean Patry (12) led the way, each notching double-digit kill tallies. Rossard served up a team-best three aces, while Barthelemy Chinenyeze (9) and Nicolas LeGoff (8) rounded out the scoring.  Boyer and Chinenyeze put up two blocks apiece. Patry got the start and played the first three sets, before being relieved by Boyer. Chinenyeze also joined the match as a substitute, coming in in Set 2 and starting the rest of the way.