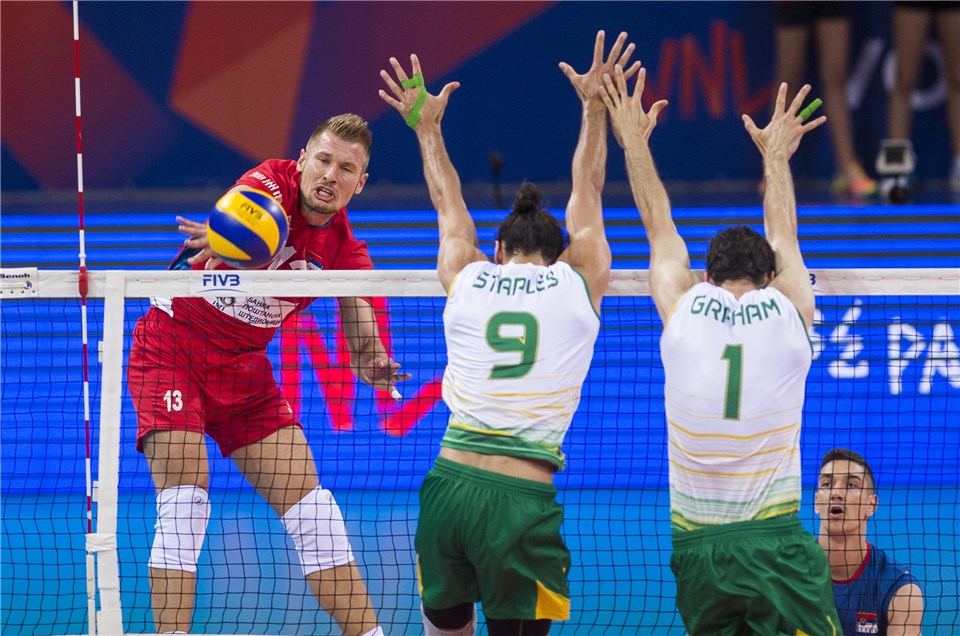 Serbia moved its third straight five-set match in as many days, holding on for the victory over Australia behind Dusan Petkovic. Meanwhile, Egor Kliuka and Dmitriy Muserskiy proved too much for Bulgaria to handle as the team fell to Russia in a sweep. Current Photo via FIVB

Serbia moved its third straight five-set match in as many days, holding on for the victory over Australia.

Dusan Petkovic took the reigns for Serbia, scoring 18 points, all on kills. Uros Kovacevic and Aleksandar Okolic chipped in 10 and nine points respectively, and six others turned in four or more points in the win. Okolic starred at the net with six blocks, while Kovacevic downed nine putaways. Milan Katic added seven putdowns in the first three sets. Late subs Marko Ivovic (5) and Drazen Luburic (4) came through in the end with Luburic issuing the final blow.

Serbia grabbed a 10-5 lead in Set 5 and carried on to victory despite an Australian charge and a denied challenge that looked to cut the margin to three. Instead, it was 14-9 Serbia when Luburic, who only played in the final two sets, served up an ace to cap the match.

Australia switched setters ahead of Set 3, going with Arshdeep Dosanjh among three new starters, and that stemmed the tide. The Aussies rolled to a 16-13 advantage and led 23-20 before clinching the win on a Serbian service error.

Ivovic, Luburic and Srecko Lisinac entered the match in Set 4 and aided Serbia, but it was not enough to overcome a surging Richards and the Aussies, who sent the match to a decisive fifth set on a Nikola Mijailovic miscue.

Egor Kliuka and Dmitriy Muserskiy proved too much for Bulgaria to handle as the team fell to Russia in a sweep on Sunday, leaving the home fans without a win to celebrate in Pool 5 action.

Bulgaria got 10 points from Nikolay Uchikov (8 kills, 2 blocks) and five point efforts from three others in the loss. Svetoslav Gotsev (3 kills, 1 block, 1 ace), Valentine Bratoev (5 kills) and Viktor Yosifov (2 kills, 3 blocks) made up the group. Todor Skrimov chipped in four kills. Gotsev entered the match as a substitute in Set 2 and started the third, while Bratoev acted as a sub in Set 3. Bulgaria played without starting setter Georgi Bratoev, who injured his ankle against Australia and is expected to miss the remainder of the team’s VNL matches.