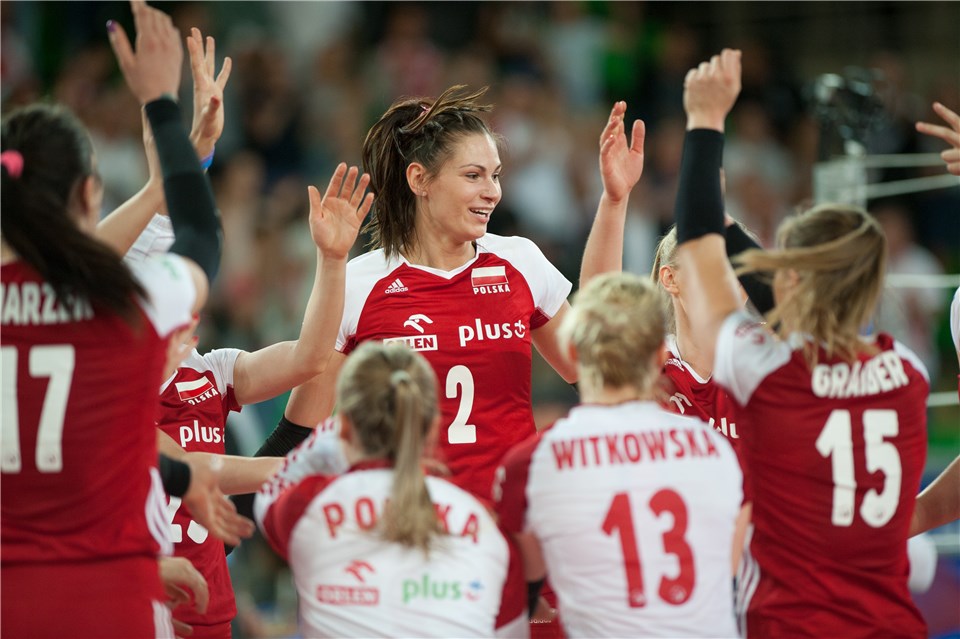 Kaja Grobelna put on a show, scoring 24 points on 17 kills, four blocks and three aces, to pace Belgium in a sweep of winless Argentina. Poland blocked Germany off the court with 20 stuffs in a four-set win on Wednesday.  Current Photo via FIVB

Kaja Grobelna put on a show, scoring 24 points on 17 kills, four blocks and three aces, to pace Belgium in a sweep of winless Argentina.

Grobelna accounted for nearly two thirds of the Belgian offense, while Britt Herbots (8) and Marlies Janssens (7) rounded out the kill tally. Celine Van Gestel served up a team-best two aces, while captain Ilka Van De Vyver was a force at the net with five blocks.

Argentina scored the opening point of the match, but Belgium soon boasted an 8-2 lead. Grobelna turned in eight points in the opening stanza as the Belgians led by as many as seven en route to a 25-22 win. Tosi tried to pull the Argentines back into the set late, cutting the margin to two, but it was not to be.

Belgium scored the first two points of Set 2 and cruised to a 25-16 win behind Grobelna and Herbots.

Argentina fell behind 12-3 in Set 3 and despite the Tosi sisters’ best efforts, could not keep up with the Belgians. Van De Vyer tooled the block to close out the 25-14 win and the match.

Poland blocked Germany off the court with 20 stuffs in a four-set win on Wednesday.

In addition to the 20-7 lead in blocks, the Poles also edged the Germans in kills (49-48) and aces (5-4). Poland received help from 22 German miscues in the match, while committing 15 errors.

Malwina Smarzek racked up a match-high 29 points, with 24 kills and five of the team’s 20 blocks. Agnieszka Kakolewska put up nine stuffs and added seven kill and an ace in her 17 point effort. Natalia Medrzyk (9), Zuzanna Efimienko-Mlotkowska (8) and Martyna Grajber (7) rounded out the offense. Medrzyk downed eight kills, while Efimienko-Mlotkowska and Grajber added five putaways and two blocks each. Marlena Plesnierowicz served up three aces.

Smarzek and Kakolewska kept the Poles just ahead in a 25-21 Set 1 win, despite the best efforts of Fromm and Scholzel. Smarzek accounted for eight points in the stanza.

The teams played to a 7-all tie in Set 2 before Germany surged ahead 16-13 on a Scholzel stuff. In a bit of mid-set drama, a lengthy review not only saw Poland’s coach Jacek Nawrocki delivered a yellow card, but also saw his team awarded the point in the end and made it 16-14. Germany recovered from the disappointment and went on to even the match with a 25-21 win, sealed by a Fromm ace.

Poland grabbed a four-point lead in Set 3 as Medrzyk and Kakolewska led the way. Germany was back within two at 14-12, but a Kakolewska ace and Efimienko-Mlotkowska block held the Poles hold the visitors at bay, before Smarzek issued the final blow.

Germany barely showed up to Set 4 as Poland scored the first 11 points en route to a 25-9 drubbing. The Poles led 17-1 before Germany found its way, but it was too little too late for the Germans. A challenge call eventually sealed the victory.