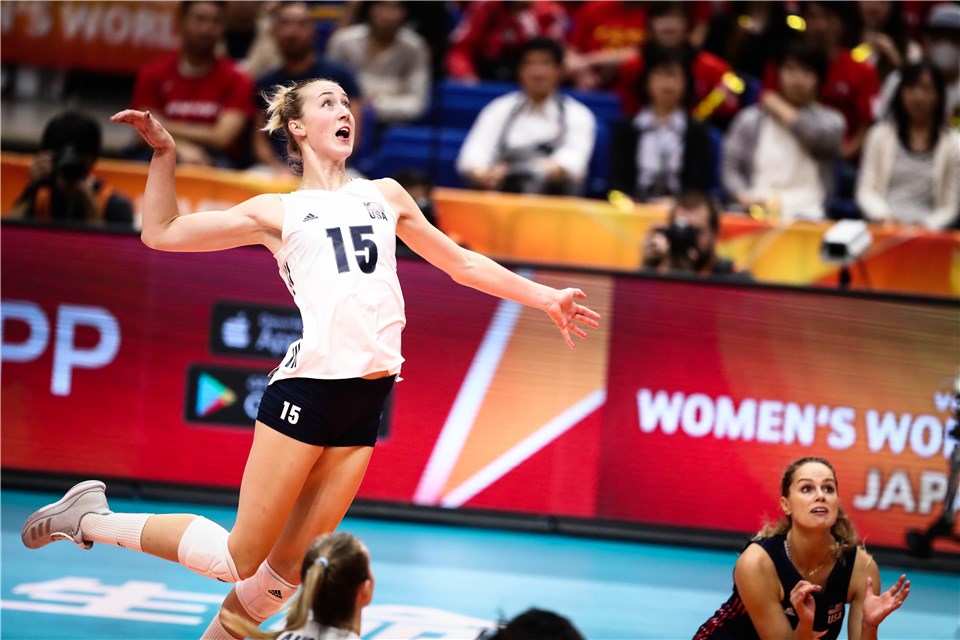 Kim Hill stepped into the spotlight in the match, racking up 25 points as the United States ended the World Championships with a four-set win over Japan and fifth place out of the 24-team field.  Current Photo via FIVB

The United States ended the World Championships with a four-set win over Japan and fifth place out of the 24-team field.

The Americans were the reigning world champions (2014) coming into the event, but failed to reach the semifinals after dropping both of their Final Six matches. In all, the USA dropped four matches in a row before topping Japan for fifth place: two in the second round (3-0 to China, 3-1 to Italy) and two in the Final Six (3-2 to China; 3-2 to Netherlands).

After giving the lead in each of its Final Six matches (2-1 to China, 2-0 to Netherlands), the United States was able to salvage a four-set win over Japan despite an error-riddled effort.

The Americans committed 28 errors in the match, but overcame them with a 67-57 advantage in kills, 10-1 edge in blocks and 7-2 lead in aces.

Kim Hill stepped into the spotlight in the match, racking up 25 points (22 kills, 2 blocks, 1 ace), while Karsta Lowe (17), Jordan Larson (12), Foluke Akinradewo (11) and Rachel Adams (10) followed. Micha Hancock got the start in place of Carli Lloyd, who had led the team at setter throughout the competition, and managed seven points, including a team-leading four aces. Lowe paced the team at the net with three blocks, while Hill and Akinradewo turned in two stuffs apiece.

Risa Shinnabe (16) and Sarina Koga (15) led the way for Japan, each notching 14 kills. Shinnabe added the team’s lone block, while each player served up an ace. Erika Araki and Yuki Ishi added eight and seven points respectively, all on kills. Ishii replace Ai Kurogo in the starting lineup for sets two and beyond. Japan utilized 12 players in the match.

The United States boasted a 16-12 lead midway through Set 1, but Japan scored in four in a row to tie it up. A Larson putaway gave the Americans a small cushion at 20-17. Hill added a stuff to make it 24-21 and a Japanese hitting error clinched the 25-23 win.

After building an early 11-8 advantage in Set 2, the United States cruised to a 25-16 win, sealing the victory with a Lowe kill and a Japanese service error.

Japan was better to start Set 3, following Araki and Koga to a 7-5 lead. A Hill block knotted the score at 12. The teams were tied again at 20 all after a Lowe putdown. Koga put Japan ahead 22-20 and a Lowe hitting error gave the hosts a set-point try at 24-22. A kill by Ishii extended the match at 25-23.

Japan carried the momentum into Set 4, putting a scare into the Americans with a 5-2 lead. The USA righted the ship with a 12-5 run, including kills by Lowe and Larson and an ace. By the second technical timeout, the Americans were back in form and up 16-12 thanks to an Adams kill. Down 20-16, Japan looked to Shinnabe, who narrowed the gap to three at 22-19. Lowe’s net defense put USA on the cusp of fifth place at 24-21 and Hill pounded down the final point, her eighth of the set, two serves later at 25-23.

Each #FIVBWomensWCH titleholder made it into the Top 5 at the next edition and USA 🇺🇸 @usavolleyball wasn't planning to break that rule. This smash by #15 Kim Hill @kimjayehill finally gave them the 5th place over Japan 🇯🇵 @JVA_Volleyball! 👇 #volleyball #volleyballWCHs pic.twitter.com/CMZLeqbhRv

USA's 🇺🇸 @usavolleyball #10 Jordan Larson @JordanLarson10 reflects on the final win vs Japan 🇯🇵 @JVA_Volleyball: "We finished strong and that's the main key point to take away". And a word for the amazing Japanese crowd as well! 🎌